SUMMARY: The FDA on May 6, 2020, granted accelerated approval to TABRECTA® (Capmatinib) for adult patients with metastatic Non-Small Cell Lung Cancer (NSCLC), whose tumors have a mutation that leads to Mesenchymal-Epithelial Transition (MET) exon 14 skipping, as detected by an FDA-approved test. The FDA also approved the FoundationOne CDx assay (Foundation Medicine, Inc.) as a companion diagnostic for TABRECTA®.

MET is a widely expressed Receptor Tyrosine Kinase and plays a pivotal role in cell growth, proliferation and survival. The MET gene encodes for a protein known as the Hepatocyte Growth Factor (HGF) Receptor. Upon binding by Hepatocyte Growth Factor (HGF), the HGF Receptor is activated, with resulting activation of the downstream RAS/RAF/MEK/ERK and PI3K/AKT/mTOR signaling pathways, thereby serving different important biological functions. Alterations in the MET gene leading to abnormal MET signaling, has been identified in different types of cancers including thyroid, lung, breast, liver, colon, kidney, ovary and gastric carcinoma. 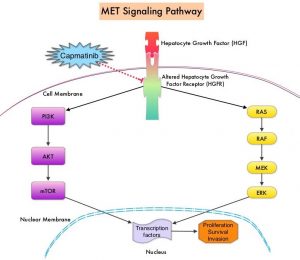 TABRECTA® (Capmatinib) is a highly potent and selective, reversible inhibitor of MET tyrosine kinase. The present FDA approval was based on the primary findings from the Phase II GEOMETRY mono-1 trial, which is a non-randomized, open-label, multi-cohort, Phase II study, conducted to evaluate the efficacy and safety of single-agent TABRECTA® in adult patients with EGFR wild-type, ALK-negative, metastatic NSCLC, whose tumors have a mutation that leads to MET exon 14 skipping (METex14), as detected by an RNA-based RT-PCR. This study enrolled 97 patients with metastatic NSCLC and confirmed MET exon 14 skipping mutations, 69 of whom were previously treated and, 28 of whom, were treatment naive. The patients received TABRECTA® at 400 mg orally twice daily until disease progression or unacceptable toxicity. The median patient age was 71 years and all NSCLC histologies including sarcomatoid/carcinosarcoma were included. Majority of the patients (75%) were white and 24% were Asian. Previous treatments included immunotherapy (28%) and chemotherapy (94%), and 23% of patients received 2 prior lines of therapy. The main efficacy outcome was Overall Response Rate (ORR) and additional efficacy outcomes included Duration of Response, Time to Response, Disease Control Rate, Progression Free Survival (PFS) and Safety. Thirteen patients (N=13) in this study had brain metastases at baseline.

Among the treatment-naïve patients group, the ORR was 68% with a median Duration of Response of 12.6 months and the percentage of patients with responses for 12 months or longer was 47%. The Disease Control Rate (Complete Response plus Partial Response plus Stable Disease) was 96.4%.

Among the previously treated patients, the ORR was 41%, with a median Duration of Response of 9.7 months and the percentage of patients with responses for 12 months or longer was 32%. The Disease Control Rate was 78.3%. Among those with brain metastases at baseline, 54% had an intracranial response with TABRECTA® with 31% showing complete resolution, 23% showing partial resolution, and the intracranial Disease Control Rate was 92%. The most common adverse events (occurring in at least 20% of patients) were peripheral edema, nausea, fatigue, vomiting, dyspnea, and decreased appetite. TABRECTA® can also cause Interstitial Lung Disease, hepatotoxicity and photosensitivity.