SUMMARY: Radiation Therapy involves the use of X-Rays, Gamma rays and charged particles for cancer treatment. External Beam Radiation Therapy (EBRT) is most often delivered using a linear accelerator in the form of Photon beams (either X-rays or Gamma rays). Photons have no mass and are packets of energy of an electromagnetic wave. Electrons and Protons are charged particles and Electrons are considered light particles whereas Protons are considered heavy particles. Electron beams are used to irradiate skin and superficial tumors, as they are unable to penetrate deep into the tissues. The different types of External Beam Radiation Treatments include 3-Dimensional Conformal Radiation Therapy (3D-CRT) meant to deliver radiation to very precisely shaped target areas, IMRT or Intensity Modulated Radiation Therapy which allows different areas of a tumor or nearby tissues to receive different doses of radiation, Image Guided Radiation Therapy (IGRT) which allows reduction in the planned volume of tissue to be treated, as changes in a tumor size are noted during treatment, Stereotactic RadioSurgery (SRS) which can deliver one or more high doses of radiation to a small tumor and Stereotactic Body Radiation Therapy (SBRT) or CYBERKNIFE® which is similar to SRS but also takes the normal motion of the body into account while treating malignancies involving the lung and liver.

Proton beams unlike Photons, enter the skin and travel through the tissues and deposit much of their energy at the end of their path (known as the Bragg peak), and deposit less energy along the way. This is unlike Photons which deposit energy all along the path through the tissues and the deposited dose decreases with increasing depth. As a result, with Proton beam therapy, normal tissues are exposed to less radiation compared with Photons. Despite this advantage, tissue heterogeneity such as organ motion, tumor volume changes during treatment can have a significant negative impact on target coverage for Proton beam therapy and can result in damage to the surrounding tissues and potential complications. It is well established that there is significant benefit for Proton beam therapy in certain pediatric malignancies. 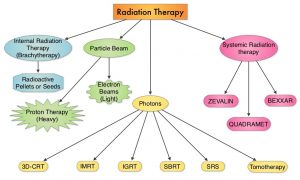 It was concluded from this analysis that in adults with locally advanced cancer, Proton chemoradiotherapy was associated with significantly reduced acute adverse events that caused unplanned hospitalizations, with similar Disease-Free and Overall Survival, compared to Photon therapy.
Comparative Effectiveness of Proton vs Photon Therapy as Part of Concurrent Chemoradiotherapy for Locally Advanced Cancer. Baumann BC, Mitra N, Harton JG, et al. Jama Oncol. 2020;6:237-246.