SUMMARY: It is estimated that in the US, approximately 100,350 new cases of melanoma will be diagnosed in 2020 and approximately 6,850 patients are expected to die of the disease. The incidence of melanoma has been on the rise for the past three decades. Stage III malignant melanoma is a heterogeneous disease and the risk of recurrence is dependent on the number of positive nodes as well as presence of palpable versus microscopic nodal disease. Further, patients with a metastatic focus of more than 1 mm in greatest dimension in the affected lymph node, have a significantly higher risk of recurrence or death, than those with a metastasis of 1 mm or less. Patients with Stage IIIA disease have a disease-specific survival rate of 78%, whereas those with Stage IIIB and Stage IIIC disease have disease-specific survival rates of 59% and 40% respectively.
Immune checkpoints are cell surface inhibitory proteins/receptors that harness the immune system, prevent uncontrolled immune reactions and suppress antitumor immunity. Antibodies that target these membrane bound inhibitory Immune checkpoint proteins/receptors such as CTLA-4 (Cytotoxic T-Lymphocyte Antigen 4), PD-1 (Programmed cell Death-1) and PD-L1 (Programmed cell Death-Ligand1) block the Immune checkpoint proteins and ligands, unleash T cells, resulting in T cell proliferation, activation and a therapeutic response. Several agents are presently approved by the FDA for the adjuvant treatment of high-risk Melanoma and they include YERVOY® (Ipilimumab), OPDIVO® (Nivolumab), KEYTRUDA® (Pembrolizumab), high-dose Interferon alfa-2b, as well as TAFINLAR® (Dabrafenib) and MEKINIST® (Trametinib) combination for BRAF-mutant Melanoma. 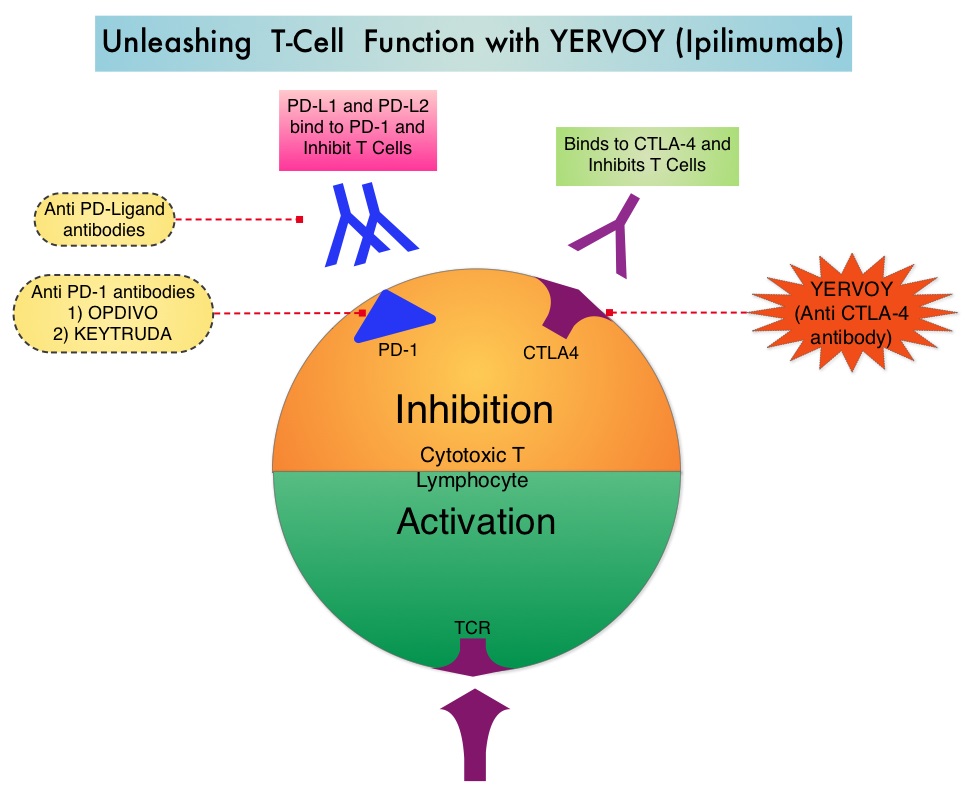 YERVOY® is a fully human immunoglobulin G1 monoclonal antibody that blocks Immune checkpoint protein/receptor CTLA-4. Overall Survival however has only been established for adjuvant high-dose Interferon alfa-2b or high dose YERVOY® given at 10 mg/kg. However, the use of YERVOY® at 10mg/kg as adjuvant therapy in clinical practice has been limited by the high incidence of severe toxicities. YERVOY® at 3 mg/kg was approved in 2011 for unresectable metastatic melanoma. To further address the relative efficacy and safety of YERVOY® at the 2 dose levels, the authors in the present study compared high-dose Interferon (HDI), a standard adjuvant treatment for high-risk melanoma available since 1996, with YERVOY® given at 3 mg/kg (Ipi3) and YERVOY® given at a dose of 10 mg/kg (Ipi10). Adjuvant high dose Interferon has been shown to improve Relapse Free Survival (RFS) and Overall Survival (OS) in ECOG and several intergroup trials.
Intergroup trial E1609 is an open-label, multicenter, multinational, 3-arm, Phase III study in which 1,670 adult patients were randomly assigned 1:1:1 to receive Ipi3 (N = 523), HDI (N = 636), or Ipi10 (N = 511). Eligible patients had completely resected Stage IIIB, IIIC, or IV (M1a or M1b) cutaneous malignant melanoma, and patients with Stage IIIB or IIIC disease were required to have complete lymph node dissection. Both Ipi3 or Ipi10 were administered IV every 3 weeks for 4 doses (induction), followed by the same dose every 12 weeks for up to 4 additional doses (maintenance). HDI was administered IV at 20 million units/m2 daily, 5 days a week, for 4 weeks (induction), followed by 10 million units/m2 subcutaneously every other day, 3 days per week, for 48 weeks (maintenance). Treatment was continued for a maximum of 60 weeks with YERVOY® or 52 weeks with HDI, or until unacceptable toxicities or disease progression. The two Coprimary end points were Overall Survival (OS) and Relapse Free Survival (RFS) of patients in the Ipi3 or Ipi10 group, each compared with outcomes of those patients in the HDI group. Secondary end points were Safety and tolerability of adjuvant YERVOY® and Quality of Life assessments.
Patients in the Ipi3 (YERVOY® 3 mg/kg) group had superior Overall Survival compared with patients in the HDI (high dose Interferon) group (HR=0.78; P=0.044). The 5 year Overall Survival rate was 72% with ipi3 and 67% with HDI. For RFS, the HR was 0.85 (P=0.065), with a median RFS of 4.5 years for Ipi3 and 2.5 years for HDI, and these study outcomes were positive and favored Ipi3, based on the protocol criteria.
When Ipi10 (YERVOY® 10 mg/kg) was compared with HDI, there were trends toward improvement in OS and RFS in favor of Ipi10, but these findings were not statistically significant. More patients in the HDI group required salvage therapy with YERVOY® or YERVOY®/PD-1 combination, compared to the Ipi3 and Ipi10 groups (P<0.001).
It was concluded that adjuvant therapy with YERVOY®, given at a dose of 3 mg/kg, was significantly less toxic and demonstrated a significant improvement in OS against an active control regimen (high dose Interferon), among patients with high-risk resected melanoma. The authors added that the current approved adjuvant YERVOY® dose of 10 mg/kg was more toxic and not superior in efficacy to high dose Interferon. Phase III Study of Adjuvant Ipilimumab (3 or 10 mg/kg) Versus High-Dose Interferon Alfa-2b for Resected High-Risk Melanoma: North American Intergroup E1609. Tarhini AA, Lee SJ, Hodi FS, et al. DOI: 10.1200/JCO.19.01381 Journal of Clinical Oncology 38, no. 6 (February 20, 2020) 567-575.