The development and progression of prostate cancer is driven by androgens. Androgen Deprivation Therapy (ADT) or testosterone suppression has therefore been the cornerstone of treatment of advanced prostate cancer, and is the first treatment intervention. Androgen Deprivation Therapies have included bilateral orchiectomy or Gonadotropin Releasing Hormone (GnRH) analogues, with or without first generation Androgen Receptor (AR) inhibitors such as CASODEX® (Bicalutamide), NILANDRON® (Nilutamide) and EULEXIN® (Flutamide) or with second-generation, anti-androgen agents, which include ZYTIGA® (Abiraterone), XTANDI® (Enzalutamide), ERLEADA® (Apalutamide) and NUBEQA® (Darolutamide).

Approximately 10-20% of patients with advanced prostate cancer will progress to Castration Resistant Prostate Cancer (CRPC) within five years during ADT, and over 80% of these patients will have metastatic disease at the time of CRPC diagnosis (mCRPC). Among those patients without metastases at CRPC diagnosis, 33% are likely to develop metastases within two years. The estimated mean survival of patients with CRPC is 9-36 months. Progression to Castration Resistant Prostate Cancer (CRPC) often manifests itself with a rising PSA (Prostate Specific Antigen), and watchful waiting is often recommended in men with non-metastatic CRPC. However, those with a rapidly rising PSA on ADT (doubling time of less than 8-10 months), are at significantly greater risk of developing metastases and death. 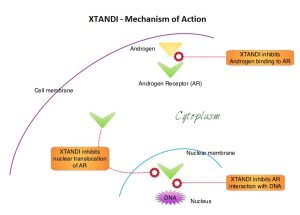 XTANDI® (Enzalutamide) is an orally administered, second-generation, anti-androgen, with no reported agonistic effects. It competitively inhibits androgens and AR binding to androgens as well as AR nuclear translocation and interaction with DNA. It thus inhibits several steps in the AR signaling pathway and was designed to overcome acquired resistance to first-generation nonsteroidal anti-androgens. Previously published studies have shown that XTANDI® improved Overall Survival in metastatic CRPC, regardless of whether it was used before or after Docetaxel chemotherapy.

PROSPER trial is a multinational, double-blind, randomized, placebo-controlled Phase III study, conducted to assess the safety and efficacy of XTANDI® in patients with nonmetastatic CRPC. In this study, 1401 eligible patients were enrolled and randomized in a 2:1 ratio to receive XTANDI® 160 mg orally once daily (N=933) or placebo (N=468). Enrolled patients had rising PSA, with a PSA doubling time of 10 months or less, despite castrate levels of testosterone (0.50 ng/mL), while continuing to receive Androgen Deprivation Therapy (ADT) with either a gonadotropin-releasing hormone agonist or antagonist or with previous bilateral orchiectomy. A diagnosis of nonmetastatic CRPC was established based on conventional imaging such as CT scans, MRI and Bone scans. The median patient age was 73 years, and both treatment groups were well balanced. The Primary endpoint was Metastasis-Free Survival (MFS), defined as time from randomization to imaging-based progression, or time to death from any cause without evidence of imaging-based progression. Secondary endpoints included Overall Survival, time to PSA progression, PSA response rate and time to first use of a subsequent antineoplastic therapy, as well as health-related quality of life and frequency and severity of adverse events. At the primary analysis, the study met the Primary endpoint of MFS and treatment with XTANDI® significantly improved Metastasis-Free Survival. The authors in this publication reported results from the prespecified final analysis of Overall Survival.

It was concluded that XTANDI® given along with Androgen Deprivation Therapy resulted in longer median Overall Survival, when compared with placebo plus ADT, among men with nonmetastatic, CRPC and a rapidly rising PSA level, with 27% lower risk of death. The authors however added that the classification of patients as having nonmetastatic disease may be impacted, with the availability of more sensitive imaging techniques, for earlier detection of metastasis.