SUMMARY: Prostate cancer is the most common cancer in American men with the exclusion of skin cancer, and 1 in 9 men will be diagnosed with Prostate cancer during their lifetime. It is estimated that in the United States, about 174,650 new cases of Prostate cancer will be diagnosed in 2019 and 31,620 men will die of the disease. The development and progression of Prostate cancer is driven by androgens. Androgen Deprivation Therapy (ADT) or testosterone suppression has therefore been the cornerstone of treatment of advanced Prostate cancer and is the first treatment intervention. Androgen Deprivation Therapies have included bilateral orchiectomy or Gonadotropin Releasing Hormone (GnRH) analogues, with or without first generation Androgen Receptor (AR) inhibitors such as CASODEX® (Bicalutamide), NILANDRON® (Nilutamide) and EULEXIN® (Flutamide). The median duration of response is approximately 1 year and majority of these patients progress to Castration Resistant Prostate Cancer (CRPC). The mechanism of resistance to Androgen Deprivation Therapy (ADT) include reactivation of Androgen Receptor signaling through persistent adrenal androgen production, modification of the biologic characteristics of Androgen Receptors, intratumoral testosterone production and parallel steroidogenic pathways. Progression to Castration Resistant Prostate Cancer (CRPC) often manifests itself with a rising PSA (Prostate Specific Antigen), and watchful waiting is recommended in men with non-metastatic CRPC. However, those with a rapidly rising PSA on ADT (doubling time of less than 8-10 months), are at significantly greater risk of developing metastases and death. 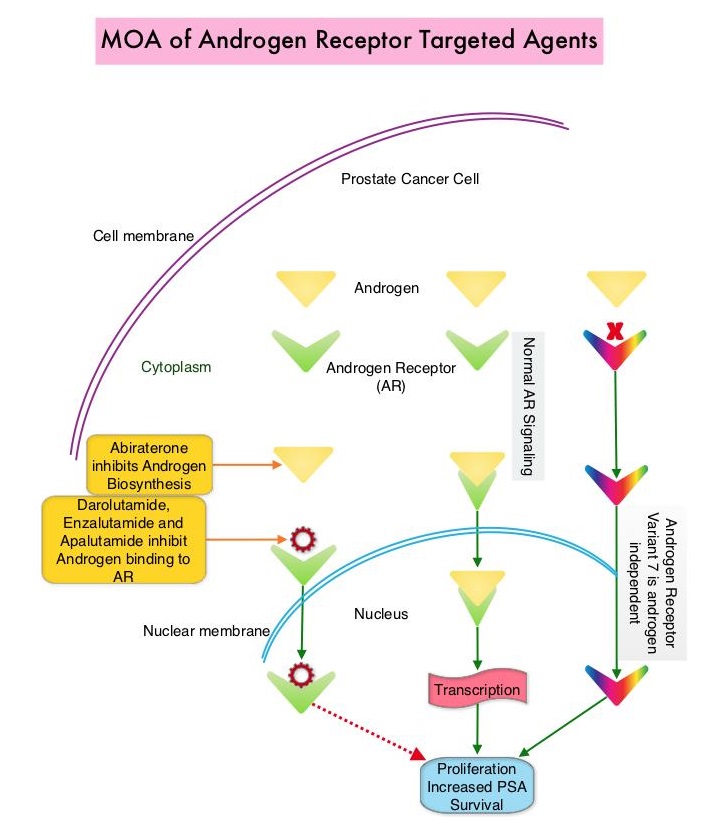 The Androgen-Receptor inhibitors ERLEADA® (Apalutamide) and XTANDI® (Enzalutamide) have recently been approved for the treatment of nonmetastatic CRPC. However, patients who may already be experiencing adverse effects from their ongoing ADT may experience additional toxicities from these agents. There is therefore an unmet need for therapies with improved safety and toxicity profiles.

Darolutamide is a nonsteroidal AR antagonist with a unique molecular structure that is distinct from other AR antagonists and exhibits tighter binding affinity to the AR than ERLEADA® and XTANDI®, resulting in strong androgen inhibitory activity. Darolutamide and its major metabolite are full antagonists and retain their activity against known AR mutations shown to enable resistance to first- and second-generation ADTs. Additionally, Darolutamide has low penetration of the blood-brain barrier and low binding affinity for Gamma AminoButyric Acid type A receptors, which in turn reduces the risk of CNS-related Adverse Events such as seizures, and results in less severe toxic effects than ERLEADA® and XTANDI®, in patients with CRPC. Darolutamide and its active metabolite have been shown to inhibit testosterone-induced translocation of AR to the nucleus, thus decreasing activation of genes required for the growth and survival of prostate tumor cells.

Based on the significant antitumor activity of Darolutamide in Phase I and II studies, as well as favorable side effect profile, the authors conducted a multinational, randomized, double-blind, placebo-controlled, Phase III trial (ARAMIS- Androgen Receptor Antagonizing Agent for Metastasis-free Survival), involving 1509 patients with nonmetastatic, Castration-Resistant Prostate Cancer (CRPC) and a Prostate Specific Antigen doubling time of 10 months or less and a baseline PSA level of at least 2 ng/ml. Patients were randomly assigned in a 2:1 ratio to receive Darolutamide 600 mg orally twice daily or placebo. Patients continued to receive ADT (Luteinizing Hormone Releasing Hormone agonist or antagonist) throughout the trial. The median patient age was 74 years, median time from initial diagnosis was 85 months and approximately 30% of patients were on a bone-sparing agent. The Primary end point was Metastasis-Free Survival, with the presence of metastasis determined by Independent Central Review of radiographic imaging, every 16 weeks. Secondary end points included Overall Survival, Time to pain progression, Time to first symptomatic skeletal event and Time to first cytotoxic chemotherapy. The median follow up was 17.9 months.