SUMMARY: Breast cancer is the most common cancer among women in the US and about 1 in 8 women 12%) will develop invasive breast cancer during their lifetime. Approximately 279,100 new cases of invasive breast cancer will be diagnosed in 2020 and about 42,690 individuals will die of the disease largely due to metastatic recurrence. About 70% of breast tumors express Estrogen Receptors and/or Progesterone Receptors, and Hormone Receptor (HR)-positive/HER2-negative breast cancer is the most frequently diagnosed molecular subtype. Majority of these patients are diagnosed with early stage disease and are often cured with a combination of surgery, radiotherapy, chemotherapy, and hormone therapy. However approximately 20% of patients will experience local recurrence or distant relapse during the first 10 years of treatment. This may be more relevant for those with high risk disease, among whom the risk of recurrence is even greater during the first 2 years while on adjuvant endocrine therapy, due to primary endocrine resistance. More than 75% of the early recurrences are seen at distant sites.

Cyclin Dependent Kinases (CDK) play a very important role to facilitate orderly and controlled progression of the cell cycle. Genetic alterations in these kinases and their regulatory proteins have been implicated in various malignancies. CDK 4 and 6 phosphorylate RetinoBlastoma protein (RB), and initiate transition from the G1 phase to the S phase of the cell cycle. RetinoBlastoma protein has antiproliferative and tumor-suppressor activity and phosphorylation of RB protein nullifies its beneficial activities. CDK4 and CDK6 are activated in hormone receptor positive breast cancer, promoting breast cancer cell proliferation. Further, there is evidence to suggest that endocrine resistant breast cancer cell lines depend on CDK4 for cell proliferation. The understanding of the role of Cyclin Dependent Kinases in the cell cycle, has paved the way for the development of CDK inhibitors. 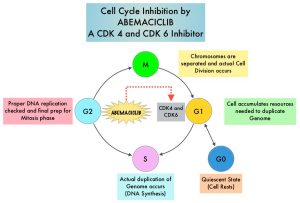 VERZENIO® (Abemaciclib) is an oral, selective inhibitor of CDK4 and CDK6 kinase activity, and prevents the phosphorylation and subsequent inactivation of the Rb tumor suppressor protein, thereby inducing G1 cell cycle arrest and inhibition of cell proliferation. VERZENIO® is structurally distinct from other CDK 4 and 6 inhibitors (such as Ribociclib and Palbociclib) and is 14 times more potent against cyclin D1/CDK 4 and cyclin D3/CDK 6, in enzymatic assays, but potentially less toxic than earlier pan-CDK inhibitors. At higher doses, only VERZENIO® causes significant cancer cell death, compared with other CDK4/6 inhibitors, suggesting that this drug may be affecting proteins, other than CDK4/6. Additionally, preclinical studies have demonstrated that VERZENIO® may have additional therapeutic benefits for a subset of tumors that are unresponsive to treatment or have grown resistant to other CDK4/6 inhibitors. It has also been shown to cross the blood-brain barrier.

The international monarchE trial, is an open-label, randomized, Phase III study, which included 5637 patients, who were pre- and postmenopausal, with HR-positive, HER2-negative early breast cancer, and with clinical and/or pathologic risk factors that rendered them at high risk for relapse. The researchers defined high risk as the presence of four or more positive axillary lymph nodes, or 1-3 three positive axillary lymph nodes, with either a tumor size of 5 cm or more, histologic Grade 3, or centrally tested high proliferation rate (Ki-67 of 20% or more). Following completion of primary therapy which included both adjuvant and neoadjuvant chemotherapy and radiotherapy, patients were randomly assigned (1:1) to VERZENIO® 150 mg orally twice daily for 2 years plus 5 to 10 years of physicians choice of endocrine therapy as clinically indicated (N=2808), or endocrine therapy alone (N=2829). The median patient age was 51 years, about 43% of the patients were premenopausal, and 95% of patients had prior chemotherapy. Approximately 60% of patients had 4 or more positive lymph nodes. The Primary endpoint was Invasive Disease Free Survival (IDFS), and Secondary end points included distant Relapse Free Survival, Overall Survival, and safety. The authors in this publication reported the first results, following a preplanned interim analysis.

It was concluded that VERZENIO® when combined with endocrine therapy demonstrated a significant improvement in Invasive Disease Free Survival, compared to endocrine therapy alone, in patients with high risk HR-positive, HER2-negative early breast cancer. The researchers also plan to look at genomic signatures in the tissue and plasma samples of enrolled patients and response to VERZENIO®.