SUMMARY: The American Cancer Society estimates that about 54,000 new cases of oral cavity or Oropharyngeal Cancer will be diagnosed in the US in 2022 and about 11,230 patients will die of the disease. According to the CDC, based on data from 2014 to 2018, about 46,143 HPV-associated cancers occur in the United States each year (25,719 among women, and 20,424 among men). Cervical cancer is the most common HPV-associated cancer among women, and Oropharyngeal cancers are the most common among men. There has been a signiﬁcant increase in the incidence during the past several decades, due to changes in sexual practices.

HPV-positive Oropharyngeal Squamous Cell Carcinoma (OPSCC) is an entirely distinct disease entity from HPV-negative Oropharyngeal Squamous Cell Carcinoma. Patients with HPV-positive OPSCC tend to be younger males, who are former smokers or nonsmokers, with risk factors for exposure to High Risk HPV (HR-HPV). The HPV-positive primary Squamous Cell Carcinoma tend to be smaller in size, with early nodal metastases, and these patients have a better prognosis compared with patients with HPV-negative Head and Neck Squamous Cell Carcinoma (HNSCC), when treated similarly. Expression of tumor suppressor protein, known as p16, is highly correlated with infection with HPV in HNSCC. Accurate HPV assessment in head and neck cancers is becoming important as it significantly impacts clinical management. HPV status is considered the most important prognostic indicator in patients with head and neck cancer and p16 status is now included in the American Joint Committee on Cancer (AJCC) Staging System.

HPV-positive Oropharyngeal Squamous Cell Carcinoma is more sensitive to chemotherapy and radiotherapy than is HPV-negative Oropharyngeal Squamous Cell Carcinoma, which translates to a much better prognosis and survival, when treated with a combination of Cisplatin chemotherapy and Radiotherapy. This treatment however can be associated with substantial morbidity and lifelong toxicities such as dry mouth, difficulty swallowing, and loss of taste. 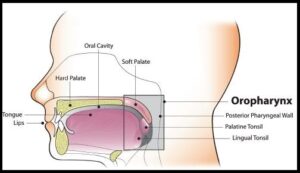 All enrolled patients had a pre-treatment FDG-PET/CT imaging and received weekly Carboplatin and Paclitaxel concurrently with planned radiotherapy at 70 Gy in 35 fractions. FDG-PET was repeated midway through treatment after 2 weeks at fraction 10. Patients who had tumors with lower metabolic activity before treatment and more than 50% reduction in Metabolic Tumor Volume after 2 weeks of treatment were de-escalated from the standard radiotherapy total dose of 70 Gy in 35 fractions, to a total dose of 54 Gy in 27 fractions. The median patient age was 60 years and baseline characteristics showed that both standard and de-escalated cohorts had similar patient demographics and pathology. At the planned interim analysis, early toxicity and Patient Reported Outcomes (PROs) were examined.

Fifty percent (50%) of the patients met de-escalation criteria and received the lower radiation dose, leading to 20-30% reductions in radiation exposure to sensitive structures in the head and neck prone to toxicities such as larynx, constrictors, oral cavity and salivary glands. De-escalation from the standard radiotherapy resulted in significantly less acute toxicity, and at one month after treatment, patients who received de-escalated therapy lost less weight as a percentage of baseline, compared to standard treatment group (6% versus 11%; P<0.001) and had improved videofluoroscopic swallowing function following treatment, and fewer patients required feeding tube placement during treatment.

The authors concluded that although the trial remains ongoing, mid-treatment FDG-PET response adaptation allows for approximately 50% of early stage p16 positive Oropharyngeal cancer patients to be de-escalated to a total dose of 54 Gy. This in turn can result in approximately 25% reduction in dose delivered to organs known to affect toxicity and quality of life, with significantly better objective measures of toxicity and numerically improved Patient Related Outcomes.