SUMMARY: Breast cancer is the most common cancer among women in the US and about 1 in 8 women (12%) will develop invasive breast cancer during their lifetime. Approximately 284,200 new cases of breast cancer will be diagnosed in 2021 and about 44,130 individuals will die of the disease, largely due to metastatic recurrence. The HER or erbB family of receptors consist of HER1, HER2, HER3 and HER4. Approximately 15-20% of invasive breast cancers overexpress HER2/neu oncogene, which is a negative predictor of outcomes without systemic therapy. Patients with HER2-positive metastatic breast cancer are often treated with anti-HER2 targeted therapy along with chemotherapy, irrespective of hormone receptor status, and this has resulted in significantly improved treatment outcomes. HER2 oncoprotein is also expressed by tumor cells in GastroEsophageal and other solid tumors.

HER2-targeted therapies include HERCEPTIN® (Trastuzumab), TYKERB® (Lapatinib), PERJETA® (Pertuzumab) and KADCYLA® (Ado-Trastuzumab Emtansine). Dual HER2 blockade with HERCEPTIN® and PERJETA®, given along with chemotherapy (with or without endocrine therapy), as first line treatment, in HER2 positive metastatic breast cancer patients, was shown to significantly improve Progression Free Survival (PFS) as well as Overall Survival (OS). The superior benefit with dual HER2 blockade has been attributed to differing mechanisms of action and synergistic interaction between HER2 targeted therapies. Patients progressing on Dual HER2 blockade often receive KADCYLA® which results in an Objective Response Rate (ORR) of 44% and a median PFS of 9.6 months, when administered after HERCEPTIN® and a taxane. There is however no standard treatment option for this patient population following progression on KADCYLA®. 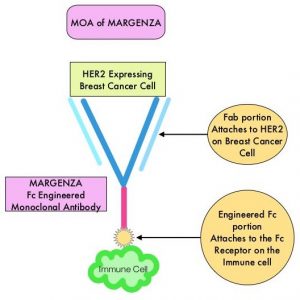 MARGENZA® (Margetuximab-cmkb) is an Fc-engineered, monoclonal antibody that binds to the HER2 oncoprotein with high specificity and affinity and inhibits tumor cell proliferation and survival, by mediating Antibody-Dependent Cellular Cytotoxicity (ADCC). It is postulated that the Fab portion of MARGENZA® has the same specificity and affinity to HER2 oncoprotein as Trastuzumab, with similar ability to disrupt signaling. However, the modified Fc region of MARGENZA®, which binds to Fc receptor expressing cells such as immune cells, has increased affinity for activating Fc receptor FCGR3A (CD16A) and decreased affinity for inhibitory Fc receptor FCGR2B (CD32B). These changes lead to greater ADCC and Natural Killer cell activation. Approximately 85% of individuals are CD16A-158F allele carriers.

The SOPHIA study is a randomized, multicenter, open-label, Phase III clinical trial, in which MARGENZA® plus chemotherapy was compared to Trastuzumab plus chemotherapy in patients with HER2-positive metastatic breast cancer, who have previously been treated with anti-HER2-targeted therapies. This study enrolled 536 patients who were randomized 1:1 to receive either MARGENZA® 15 mg/kg IV every three weeks (N=266) or Trastuzumab 6 mg/kg (8 mg/kg loading dose) IV every three weeks (N=270), in combination with Capecitabine, Eribulin, Gemcitabine or Vinorelbine, given at the standard doses. The median age was 56 years, all study patients had previously received Trastuzumab, all but one patient had previously received PERJETA® (Pertuzumab), and 91% of patients had previously received KADCYLA®. Patients were stratified by choice of chemotherapy, number of lines of therapy in the metastatic setting and number of metastatic sites. The dual Primary endpoints of the study were Progression Free Survival (PFS) by Blinded Independent Central Review (BICR) and Overall Survival (OS). Additional efficacy outcome measures included Objective Response Rate (ORR) and Duration of Response (DOR) assessed by BICR.

This study demonstrated a statistically significant 24% reduction in the risk of disease progression or death with MARGENZA® plus chemotherapy compared with Trastuzumab plus chemotherapy (HR= 0.76; P=0.03), with a median PFS of 5.8 months versus 4.9 months respectively. Treatment benefit was more pronounced in patients with CD16A genotypes containing a 158F allele (median PFS 6.9 versus 5.1 months, HR=0.68; P=0.005). The ORR for MARGENZA® plus chemotherapy was 22%, with a median Duration of Response of 6.1 months, compared to an ORR of 16% and median Duration of Response of 6.0 months for Trastuzumab plus chemotherapy. After the second planned interim analysis, the median OS was 21.6 months with MARGENZA® versus 19.8 months with Trastuzumab (HR= 0.89; P=0.33) and the ORR was 25% versus 14% respectively (P<0.001). The final Overall Survival (OS) analysis is expected in the second half of 2021. Safety was comparable in treatment groups, although the incidence of infusion-related reactions, mostly in cycle 1, was higher with MARGENZA® (13.3% versus 3.4%).

It was concluded that MARGENZA® in combination with chemotherapy significantly improved PFS, compared to Trastuzumab plus chemotherapy, in pretreated patients with HER2 positive metastatic breast cancer. MARGENZA® along with chemotherapy represents the newest treatment option for patients who have progressed on available HER2-directed therapies.