SUMMARY: Prostate cancer is the most common cancer in American men with the exclusion of skin cancer, and 1 in 8 men will be diagnosed with prostate cancer during their lifetime. It is estimated that in the United States, about 248,530 new cases of prostate cancer will be diagnosed in 2021 and 34,130 men will die of the disease. The development and progression of prostate cancer is driven by androgens. Androgen Deprivation Therapy (ADT) or testosterone suppression has therefore been the cornerstone of treatment of advanced prostate cancer, and is the first treatment intervention. Androgen Deprivation Therapies have included bilateral orchiectomy or Gonadotropin Releasing Hormone (GnRH) analogues, with or without first generation Androgen Receptor (AR) inhibitors such as CASODEX® (Bicalutamide), NILANDRON® (Nilutamide) and EULEXIN® (Flutamide) or with second generation anti-androgen agents, which include ZYTIGA® (Abiraterone), XTANDI® (Enzalutamide), ERLEADA® (Apalutamide) and NUBEQA® (Darolutamide). Approximately 10-20% of patients with advanced Prostate cancer will progress to Castration Resistant Prostate Cancer (CRPC) within five years during ADT, and over 80% of these patients will have metastatic disease at the time of CRPC diagnosis. Among those patients without metastases at CRPC diagnosis, 33% are likely to develop metastases within two years. Progression to Castration Resistant Prostate Cancer (CRPC) often manifests itself with a rising PSA (Prostate Specific Antigen), and watchful waiting is often recommended in men with non-metastatic CRPC. However, those with a rapidly rising PSA on ADT (doubling time of less than 8-10 months), are at significantly greater risk of developing metastases and death. The estimated mean survival of patients with CRPC is 9-36 months, and there is therefore an unmet need for new effective therapies. 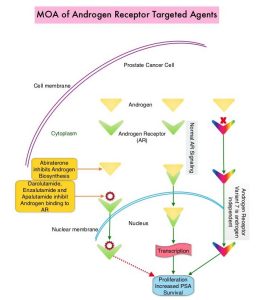 Expression of Androgen Receptor (AR) in prostate cancer is heterogeneous and this AR heterogeneity is accentuated in advanced metastatic and relapsed prostate cancer with varying degrees of AR resistance and sensitivity. Both single agent ERLEADA® (Apalutamide) and ZYTIGA® (Abiraterone acetate) in combination with Prednisone, are approved for the treatment of metastatic CRPC. They have distinct mechanisms of action on the Androgen Receptors. Apalutamide is an Androgen Receptor (AR) inhibitor that binds directly to the ligand-binding domain of the AR. Apalutamide inhibits AR nuclear translocation, inhibits DNA binding, and impedes AR-mediated transcription. Abiraterone acetate is an androgen biosynthesis inhibitor that inhibits CYP17, an enzyme expressed in testicular, adrenal, and prostatic tumor tissues, and is required for androgen biosynthesis. The ACIS trial was conducted to study the benefit of androgen annihilation by combining these two drugs (dual inhibition), for the first-line treatment of metastatic CRPC.

ACIS is a randomized, double-blind, placebo-controlled, multicenter study Phase III trial in which the efficacy and safety of single agent Apalutamide and Abiraterone acetate along with Prednisone plus ADT, was compared to placebo and Abiraterone acetate with Prednisone plus ADT, in patients with chemotherapy-naïve mCRPC. This study enrolled 982 chemo naïve patients with metastatic CRPC, who had disease progression on ADT, and were on no other life-prolonging treatment since diagnosis. Patients were randomized 1:1 to receive Apalutamide 240 mg daily along with Abiraterone acetate 1000 mg daily plus Prednisone 5 mg twice daily, all given orally (N=492) versus Placebo along with Abiraterone Acetate plus Prednisone (N=490). All patients were also on Androgen Deprivation Therapy. The median patient age was 71 years, 53% of patients had a Gleason score of 7 or more at initial diagnosis, about 85% had bone metastases, 48% had lymph node metastases and 15% had visceral metastases. Baseline characteristics were comparable in both treatment groups.
The Primary end point was radiographic Progression Free Survival (rPFS), defined from randomization date to radiographic progression date or death. Secondary end points included PSA response, Overall Survival (OS), initiation of cytotoxic chemotherapy, and pain progression.

It was concluded that the ACIS trial met its Primary endpoint, and when compared to Abiraterone with ADT, a combination of Apalutamide plus Abiraterone along with ADT demonstrated a 31% reduction in risk of radiographic progression or death, in chemo-naive mCRPC patients.