SUMMARY: Bile Duct cancer (Cholangiocarcinoma), comprise about 30% of all primary liver tumors and includes both intrahepatic and extrahepatic bile duct cancers. Klatskin tumor is a type of Cholangiocarcinoma that begins in the hilum, at the junction of the left and right bile ducts. It is the most common type of Cholangiocarcinoma, accounting for more than half of all cases. About 8,000 people in the US are diagnosed with Cholangiocarcinoma each year and approximately 20% of the cases are suitable for surgical resection. The 5-year survival is less than 10%, with limited progress made over the past two decades. There is therefore an unmet need for new effective therapies. 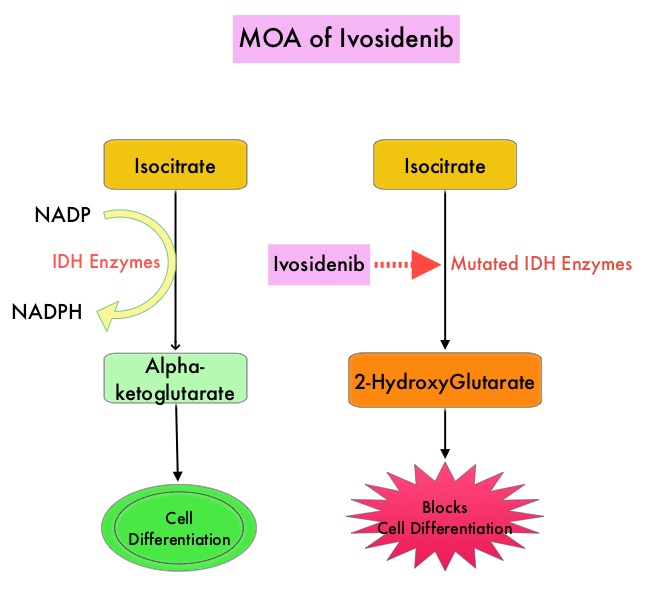 Isocitrate DeHydrogenase (IDH) is a metabolic enzyme that helps generate energy from glucose and other metabolites, by catalyzing the conversion of Isocitrate to Alpha-Ketoglutarate. Alpha-ketoglutarate is required to properly regulate DNA and histone methylation, which in turn is important for gene expression and cellular differentiation. IDH mutations lead to aberrant DNA methylation and altered gene expression thereby preventing cellular differentiation, with resulting immature undifferentiated cells. IDH mutations can thus promote leukemogenesis in Acute Myeloid Leukemia (AML) and tumorigenesis in solid tumors and can result in inferior outcomes. There are three isoforms of IDH. IDH1 is mainly found in the cytoplasm, as well as in peroxisomes, whereas IDH2 and IDH3 are found in the mitochondria, and are a part of the Krebs cycle. Approximately 20% of patients with AML, 70% of patients with Low-grade Glioma and secondary Glioblastoma, 50% of patients with Chondrosarcoma, 20% of patients with Intrahepatic CholangioCarcinoma, 30% of patients with Angioimmunoblastic T-cell lymphoma and 8% of patients with Myelodysplastic syndromes/Myeloproliferative neoplasms, are associated with IDH mutations.

TIBSOVO® (Ivosidenib) is an oral, targeted, small-molecule inhibitor of mutant IDH1. The FDA in July, 2018, approved TIBSOVO® for adult patients with relapsed or refractory AML with a susceptible IDH1 mutation. A previously published Phase I study demonstrated the safety and activity of TIBSOVO® in patients with IDH1 mutated advanced CholangioCarcinoma.

ClarIDHy is an international, randomized, double-blind, Phase III study, in which 185 patients with advanced CholangioCarcinoma with an IDH1 mutation were randomly assigned 2:1 to receive TIBSOVO® 500 mg orally once daily (N=124) or matched placebo (N=61). All patients had advanced unresectable CholangioCarcinoma. The median age was 62 years, 91% had intrahepatic CholangioCarcinoma, 92% of patients had metastatic disease and 43% had received two prior therapies. The Primary endpoint was Progression Free Survival (PFS) and Secondary endpoints included Safety, Objective Response Rate (ORR) and Overall Survival (OS). Crossover from placebo to TIBSOVO® was permitted upon radiographic disease progression.

This study met its Primary endpoint and the median PFS was 2.7 months for patients treated with TIBSOVO® compared to 1.4 months with placebo (HR=0.37; P<0.001). More importantly, the median PFS at 6 and 12 months were 32% and 22% in the TIBSOVO® group, whereas no patients randomized to the placebo group were progression-free for 6 or more months, at the time of data cutoff. There was a favorable trend in Overall Survival with TIBSOVO® and the median OS was 10.8 months for TIBSOVO® and 9.7 months for placebo (HR=0.69, one-sided P=0.06). However, the adjusted OS among the placebo group patients was 6 months, after taking into account that 57% of these patients crossed over to TIBSOVO®, and this was significantly shorter, when compared to the TIBSOVO® group (HR=0.46; P=0.0008). Most common Adverse Events were nausea, diarrhea, fatigue, cough, abdominal discomfort, ascites, anemia and vomiting.

It was concluded that treatment with TIBSOVO® among patients with advanced CholangioCarcinoma with an IDH1 mutation, resulted in significant improvement in Progression Free Survival as well as favorable Overall Survival trend, when compared to Placebo. The authors added that this is the first pivotal study demonstrating the clinical benefit of targeting IDH1 mutation in this patient group. Studies are also underway targeting another molecular alteration, FGFR2, which is detected in approximately 15% of patients with CholangioCarcinoma. ClarIDHy: A global, phase 3, randomized, double-blind study of ivosidenib (IVO) vs placebo in patients with advanced cholangiocarcinoma (CC) with an isocitrate dehydrogenase 1 (IDH1) mutation. Abou-Alfa GK, Maraculla TM, Javle M, et al. Presented at 2019 ESMO Congress; September 27 to October 1, 2019; Barcelona, Spain. Abstract LBA10_PR.