SUMMARY: The American Cancer Society estimates that for 2018, about 20,940 new cases of Chronic Lymphocytic Leukemia (CLL) will be diagnosed in the US and 4,510 patients will die of the disease. CLL accounts for about 25% of the new cases of leukemia and the average age at the time of diagnosis is around 71 years. B-cell CLL is the most common type of leukemia in adults.

The pro-survival (anti-apoptotic) protein BCL2 is over expressed by CLL cells and regulates clonal selection and cell survival. A new class of anticancer agents known as BH3-mimetic drugs mimic the activity of the physiologic antagonists of BCL2 and related proteins and promote apoptosis (programmed cell death). VENCLEXTA® (Venetoclax) is a second generation, oral, selective, small molecule inhibitor of BCL2 and restores the apoptotic processes in tumor cells. The FDA granted an accelerated approval to VENCLEXTA® in 2016, for the treatment of patients with CLL with 17p deletion, as detected by an FDA-approved test, who have received at least one prior therapy. 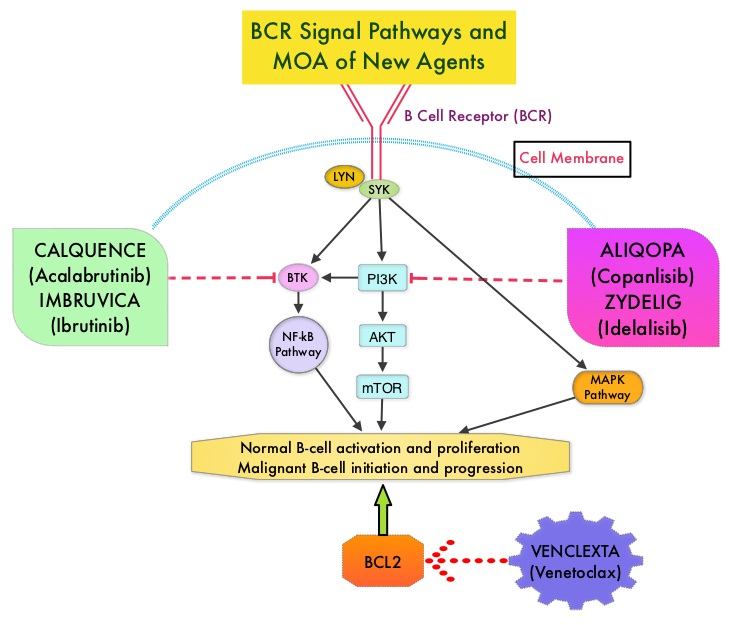 MURANO trial is an open-label, international, multicenter, phase III study which included 389 patients with relapsed/refractory CLL who had received 1-3 prior lines of therapy, including at least one chemotherapy regimen. Patients were randomized 1:1 to receive a combination of either VR – VENCLEXTA® plus RITUXAN® (N=194) or BR – Bendamustine plus RITUXAN® (N=195). In the VR group, VENCLEXTA® tablets were given once daily with a weekly dose ramp-up schedule (20 mg for 1 week, followed by 1 week at each dose level of 50 mg, 100 mg, and 200 mg and then the recommended daily dose of 400 mg), over a period of 5 weeks, given along with Tumor Lysis Syndrome prophylaxis. Patients were treated with the 400 mg daily dosing for a maximum of 2 yrs or until disease progression. RITUXAN® (Rituximab) was given beginning week 6, and was administered at 375 mg/m2 on day 1, cycle 1, followed by 500 mg/m2 on day 1 of cycles 2 thru 6, of a 28 day cycle. In the BR group, Bendamustine was given at 70 mg/m2 on days 1 and 2 of each 28 day cycle for a total of 6 cycles along with RITUXAN®, using the same RITUXAN® dosing schedule as in the VR group. Patients were stratified based on del(17p) status and responsiveness to prior therapy. The median age was 65 years, 26% of the patients had del(17p) and 15% of the patients were refractory to Fludarabine. The Primary end point was Progression Free Survival (PFS) and Secondary end points included Overall Survival (OS), Overall Response Rate (ORR) and Complete Response (CR). The median follow up was 23.8 months.

Following recommendation from the Independent Data Monitoring Committee, the study arms were unblinded before the preplanned interim analysis. It was noted that the PFS was significantly superior in the VR group compared to BR (HR=0.17, P<0.0001; median Not Reached versus 17.0 months). This meant an 83% reduction in the risk of disease progression or death in the VR group compared with the BR group. The 24 month PFS estimates were 84.9% vs 36.3%, respectively favoring VENCLEXTA®. This PFS benefit was consistently seen in all subgroups assessed, including those with del(17p), p53 mutation and IgVH unmutated status. The ORR in the VR group was 93.3% versus 67.7% in the BR group (P<0.0001) and CR was achieved in 26.8% versus 8.2% of patients respectively. The rate of MRD (Minimal Residual Disease)-negativity, defined as less than 1 CLL cell in 10,000 leukocytes, attained at any time, was also higher with VR at 83.5% versus 23.1% with BR. Further, the MRD negativity was more durable in the VENCLEXTA® group. Overall Survival evaluation is ongoing. Grade 3/4 neutropenia was higher in VR group but there was no increase in febrile neutropenia or Grade 3/4 infection.

It was concluded from this primary analysis of MURANO trial that, VENCLEXTA® in combination with RITUXAN® resulted in a significant improvement in Progression Free Survival, Overall Response Rate, Complete Response rate, along with durable improvement in peripheral blood MRD negativity, when compared with Bendamustine and RITUXAN®, in patients with relapsed/refractory CLL. Venetoclax Plus Rituximab Is Superior to Bendamustine Plus Rituximab in Patients with Relapsed/ Refractory Chronic Lymphocytic Leukemia – Results from Pre-Planned Interim Analysis of the Randomized Phase 3 Murano Study. Seymour JF, Kipps TJ, Eichhorst BF, et al. Presented at: ASH Annual Meeting and Exposition; Dec. 9-12, 2017; Atlanta, Georgia. Abstract LBA-2.