SUMMARY: Metastatic Spinal Cord Compression (MSCC) first described by Spiller in 1925, is an oncologic emergency and is a well recognized complication of cancer. Approximately 10% of all patients with cancer develop metastatic disease to the spinal column. Even though any solid tumor can metastasize to the spine, more than 50% of MSCC cases are caused by breast cancer, prostate cancer and lung cancer. The risk of MSCC is particularly high in those patients with widespread malignancy and those with known spinal metastases. Pathological compression fracture of the vertebral body or direct tumor invasion can cause compression of the spinal cord or cauda equina resulting in irreversible neurological deficit as well as paraplegia. Common symptoms include back pain, tingling, numbness and difficulty walking. Early recognition of symptoms and prompt intervention is therefore imperative to prevent neurological damage. 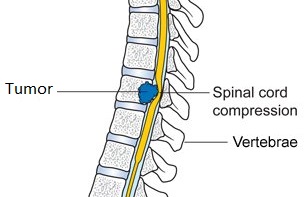 Patients with MSCC, in addition to steroids, are often treated with Radiation Therapy (RT) to relieve pain and improve neurological function and mobility. There is however no standard Radiation Therapy schedule. ASTRO (American Society for Radiation Oncology) in its “Choosing Wisely” guidelines recommended not using extended fractionated schemes (more than 10 fractions) for palliation of bone metastases. Equivalent pain relief can be accomplished following 30 Gy in 10 fractions, 20 Gy in 5 fractions, or a single 8 Gy fraction. It was also recommended that strong consideration should be given to a single 8 Gy fraction, for patients with a limited prognosis or with transportation difficulties.

SCORAD III is a randomized phase III study which evaluated whether a single-dose Radiation Therapy (RT) was as effective as multifraction RT administered over 5 days, without compromising patient outcomes. Enrolled patients (N=688) were randomized 1:1 to receive External Beam spinal canal RT as a single dose of 8 Gy (N=345) or 20 Gy in 5 fractions (N=343). Eligible patients had spinal cord or cauda equina (C1-S2) compression, confirmed by MRI/CT scan, treatable within a single radiation field, with no prior RT to the same area and had a life expectancy of more than 8 weeks. The median age was 70 years, 73% were male and 44% had metastatic prostate, 18% had metastatic lung, 11% had metastatic breast and another 11% had metastatic GastroIntestinal cancers. Patients were stratified by Ambulatory Status (AS), site of primary, and presence or absence of non-skeletal metastases. The primary endpoint of the study was Ambulatory Status, measured on a four-point scale – Grade 1: Able to walk normally, Grade 2: Able to walk with a walking aid (such as a cane or walker), Grade 3: Has difficulty walking even with walking aids and Grade 4: Dependent on wheelchair. Two third of the patients (66%) were ambulatory with or without walking aids (Ambulatory Status of 1 to 2) at study entry.

It was noted that at 8 weeks, 69.5% of patients who received single-dose radiation therapy and 73.3% of those who received five doses had an Ambulatory Status of 1 to 2 and could walk normally or with a walking aid such as a cane or a walker, suggesting that both single dose and longer course radiation treatments helped patients with their mobility. The median Overall Survival was similar in the two treatment groups – 12.4 weeks with a single dose versus 13.7 weeks with five doses, and this was not statistically significant (HR=1.02; P=0.81). The proportion of patients experiencing severe side effects was similar in the two treatment groups (20.6% vs 20.4%), but mild side effects were less common in the single dose of 8 Gy group compared to those receiving multiple fractions (51% vs 56.9%).

The authors concluded that a single radiation dose of 8 Gy in patients with metastatic Spinal Cord Compression was non-inferior and was as effective as longer course multiple fractions, for Ambulatory Status at 8 weeks, as well as Overall Survival. They added that this would mean fewer hospital visits and more time with the family, at least for patients with a short life expectancy. It should however be noted that in this study, at the time of enrollment, majority of patients were fully ambulatory or were able to walk with a walking aid. Whether single dose radiation therapy is adequate for those patients with very advanced involvement of the spine, however remains to be seen. SCORAD III: Randomized non-inferiority phase III trial of single dose radiotherapy (RT) compared to multifraction RT in patients (pts) with metastatic spinal canal compression (SCC). Hoskin P, Misra V, Hopkins K, et al. J Clin Oncol. 35;2017 (suppl; abstr LBA10004).