SUMMARY: Breast cancer is the most common cancer among women in the US and about 1 in 8 women (12%) will develop invasive breast cancer during their lifetime. Approximately 279,100 new cases of invasive breast cancer will be diagnosed in 2020 and about 42,690 individuals will die of the disease. Approximately 70% of breast tumors express Estrogen Receptors and/or Progesterone Receptors. The most common subtype of metastatic breast cancer is Hormone Receptor-positive (HR-positive), HER2-negative breast cancer (65% of all metastatic breast tumors), and these patients are often treated with anti-estrogen therapy as first line treatment. However, resistance to hormonal therapy occurs in a majority of the patients, with a median Overall Survival (OS) of 36 months. Cyclin Dependent Kinases (CDK) play a very important role to facilitate orderly and controlled progression of the cell cycle. Genetic alterations in these kinases and their regulatory proteins have been implicated in various malignancies. 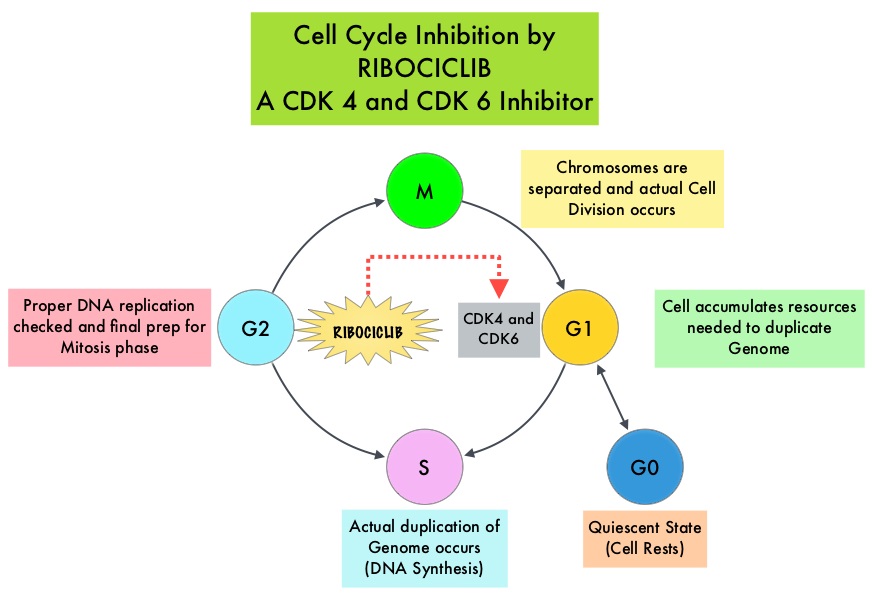 Cyclin Dependent Kinases 4 and 6 (CDK4 and CDK6) phosphorylate RetinoBlastoma protein (RB), and initiate transition from the G1 phase to the S phase of the cell cycle. RetinoBlastoma protein has antiproliferative and tumor-suppressor activity and phosphorylation of RB protein nullifies its beneficial activities. CDK4 and CDK6 are activated in hormone receptor positive breast cancer, promoting breast cancer cell proliferation. Further, there is evidence to suggest that endocrine resistant breast cancer cell lines depend on CDK4 for cell proliferation. The understanding of the role of Cyclin Dependent Kinases in the cell cycle, has paved the way for the development of CDK inhibitors.
KISQALI® (Ribociclib) is an orally bioavailable, selective, small-molecule inhibitor of CDK4/6, that blocks the phosphorylation of RetinoBlastoma protein, thereby preventing cell-cycle progression and inducing G1 phase arrest. KISQALI® in combination with an Aromatase Inhibitor has been approved by the FDA for pre and perimenopausal women with HR (Hormone Receptor)-positive, HER2-negative advanced or metastatic breast cancer, as initial endocrine-based therapy. The efficacy of KISQALI® was evaluated in two prior randomized Phase III studies. In the MONALEESA-2 trial which evaluated KISQALI® in combination with FEMARA® (Letrozole) compared to FEMARA® alone, in postmenopausal women with HR-positive, HER2-negative advanced breast cancer, who received no prior therapy for their advanced breast cancer, the addition of KISQALI® to FEMARA® significantly prolonged Progression Free Survival (PFS) compared to FEMARA® alone. In the MONALEESA-7 study, KISQALI® in combination with Tamoxifen or a Non-Steroidal Aromatase Inhibitor plus ZOLADEX® (Goserelin) was compared with Tamoxifen or an Aromatase Inhibitor plus ZOLADEX®, in premenopausal or perimenopausal women with HR-positive, HER2- negative advanced breast cancer, who had not previously received endocrine therapy for advanced disease. In this study of premenopausal women, KISQALI® plus endocrine therapy significantly improved PFS and OS, compared with placebo plus endocrine therapy.
MONALEESA-3 is a randomized, double-blind, placebo-controlled Phase III study which compared the efficacy of KISQALI® in combination with FASLODEX® with FASLODEX® alone, among postmenopausal women with HR-positive, HER2-negative advanced breast cancer, who received no prior or only one line of prior endocrine therapy for advanced disease. In this trial, 726 women were randomized, of whom 367 were treatment-naïve and 345 patients had received up to one line of prior endocrine therapy for advanced disease. . Patients were randomized 2:1 to receive KISQALI® plus FASLODEX® (N=484) or placebo plus FASLODEX® (N=242). Treatment consisted of KISQALI® 600 mg orally daily 3 weeks on and 1 week off and FASLODEX® 500 mg IM on day 1 of each 28-day cycle, with an additional dose given on day 15 of cycle 1. Patients were stratified by the presence or absence of lung or liver metastases and prior endocrine therapy (first-line versus second-line). The median age in both groups was 63 years. The Primary endpoint was Progression Free Survival (PFS). Secondary end points included Overall Survival (OS), Overall Response Rate (ORR), and Safety.
In the primary analysis of the trial, the median PFS in the KISQALI® plus FASLODEX® group was 20.5 months compared to 12.8 months in the FASLODEX® plus placebo group (HR= 0.59; P<0.001). This represented a 41% reduction in the risk of disease progression. The authors now report the results of the second interim analysis of Overall Survival and an updated analysis of Progression Free Survival. The median duration of follow up for all patients was 39.4 months, and the median duration of treatment was 15.8 months in the KISQALI® group and 12.0 months in the placebo group.
There was a significant Overall Survival benefit with KISQALI® plus FASLODEX® compared to placebo plus FASLODEX®. The estimated Overall Survival at 42 months was 57.8% in the KISQALI® group compared to 45.9% in the placebo group, and this represented a 28% reduction in the relative risk of death with the KISQALI® combination (HR=0.72; P=0.00455). The survival benefit was consistent across most subgroups. The median PFS among patients receiving first line treatment was 33.6 months (95% CI, 27.1 to 41.3) in the KISQALI® group and 19.2 months in the placebo group. No new safety signals were observed during this longer follow up period.
It was concluded that KISQALI® plus FASLODEX® significantly improved Overall Survival compared to placebo plus FASLODEX® in patients with HR-positive, HER2-negative advanced breast cancer, regardless of whether they received their treatment in the frontline setting or subsequently. Overall Survival with Ribociclib plus Fulvestrant in Advanced Breast Cancer. Slamon DJ, Neven P, Chia S, et al. N Engl J Med 2020;382:514-524