SUMMARY: Lung cancer is the second most common cancer in both men and women and accounts for about 14% of all new cancers and 27% of all cancer deaths. The American Cancer Society estimates that for 2020, about 228, 820 new cases of lung cancer will be diagnosed and 135,720 patients will die of the disease. Lung cancer is the leading cause of cancer-related mortality in the United States. Non-Small Cell Lung Cancer (NSCLC) accounts for approximately 85% of all lung cancers. Of the three main subtypes of NSCLC, 30% are Squamous Cell Carcinomas (SCC), 40% are Adenocarcinomas and 10% are Large Cell Carcinomas. With changes in the cigarette composition and decline in tobacco consumption over the past several decades, Adenocarcinoma now is the most frequent histologic subtype of lung cancer.
In the National Lung Screening Trial (NLST) with Low Dose CT (LDCT) screening for lung cancer, there was a 20% reduction in mortality. Following the publication of the results of NLST and NCCN issued guideline in 2011, the United States Preventive Services Task Force (USPSTF) recommended Lung Cancer screening with Low Dose CT scan in high risk patients. CMS in 2015 determined that there was sufficient evidence to reimburse for this preventive service.
Despite the evidence and recommendation along with supportive public policies, screening with LDCT has not been adequately implemented in the US healthcare system. Low Health Care Provider knowledge of the Lung Cancer Screening (LCS) guidelines represents a potential barrier to implementation. Additionally, despite the unequivocal findings from the NLST, several countries have not adopted this guideline due to early publication of inconclusive results from a number of smaller trials in Europe. Further, there are limited data from randomized trials regarding whether nodule volume-based, low-dose CT screening can reduce lung cancer mortality among male former and current smokers. 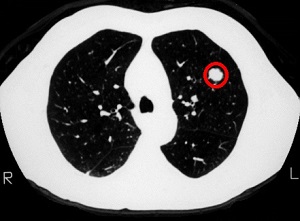 The Dutch-Belgian lung cancer screening trial, NELSON (Nederlands–Leuvens Longkanker Screenings Onderzoek ) is a population-based, randomized, controlled trial initiated in 2000. The goal of the study was to show a 25% or more reduction in lung cancer mortality, in high-risk male participants at 10 years of follow-up, utilizing volume-based, low-dose CT lung cancer screening. The authors in this publication reported the incidence of lung cancer, associated mortality, and the performance of the four rounds of low-dose CT screening for lung cancer in the this trial, among male participants (main analysis) and female participants (subgroup analyses).
In this study, a total of 13,195 men aged 50-74 years were randomly assigned to undergo CT screening at baseline, year 1, year 3, and year 5.5 (N = 6,583) or no screening (N=6,612). At the time of initiation of this trial, only a small number of women were eligible, as smoking was much less prevalent and intense among women, than among men. Because of the relevance and importance of the inclusion of women in this study, high-risk women were later allowed to participate (N=2594). Participants were current or former smokers who had quit 10 or fewer years ago, who had smoked more than 15 cigarettes a day for more than 25 years, or more than 10 cigarettes a day for more than 30 years. About 45% of the male participants were former smokers.
At 10 years of follow up, lung cancer mortality among men was 24% lower in the screening group than in the control group (Rate Ratio=0.76; P=0.01), and 33% lower among women (Rate Ratio=0.67). The CT screening compliance among men was 90% and approximately 9.2% of the screened participants underwent at least one additional CT scan due to an indeterminate screening test. Screening-detected lung cancers were substantially more often diagnosed in Stage IA or IB (58.6%) and were Adenocarcinomas (52.0% in the screening group and 43.8% in the control group).
It was concluded that in this trial involving high-risk individuals, lung cancer mortality was significantly lower among those who underwent CT screening with determination of nodule volume, than among those who underwent no screening. Adherence to CT screening was very high, with low rates of follow up procedures for results suggestive of lung cancer. Reduced Lung-Cancer Mortality with Volume CT Screening in a Randomized Trial. de Koning H.J., van der Aalst C.M., de Jong P.A., et al. N Engl J Med 2020;382:503-513