SUMMARY: ColoRectal Cancer (CRC) is the third most common cancer diagnosed in both men and women in the United States. The American Cancer Society estimates that approximately 147,950 new cases of CRC will be diagnosed in the United States in 2020 and about 53,200 patients are expected to die of the disease. The lifetime risk of developing CRC is about 1 in 23. Advanced colon cancer is often incurable and standard chemotherapy when combined with anti EGFR (Epidermal Growth Factor Receptor) targeted monoclonal antibodies such as VECTIBIX® (Panitumumab) and ERBITUX® (Cetuximab), as well as anti VEGF agent AVASTIN® (Bevacizumab), have demonstrated improvement in Progression Free Survival (PFS) and Overall Survival (OS). The benefit with anti EGFR agents however is only demonstrable in patients with metastatic CRC (mCRC), whose tumors do not harbor KRAS mutations in codons 12 and 13 of exon 2 (KRAS Wild Type). It is now also clear that even among the KRAS Wild Type patient group about 15-20% have other rare mutations such as NRAS and BRAF mutations, which confer resistance to anti EGFR agents. Patients with Stage IV colorectal cancer are now routinely analyzed for extended RAS and BRAF mutations. KRAS mutations are predictive of resistance to EGFR targeted therapy. Approximately 5-20% of all metastatic CRC tumors present with BRAF V600E mutations and BRAF V600E is recognized as a marker of poor prognosis in this patient group. These patients tend to have aggressive disease with a higher rate of peritoneal metastasis and do not respond well to standard treatment intervention. Approximately 20% of the BRAF-mutated population in the metastatic setting has MSI-High tumors, but MSI-High status does not confer protection to this patient group. 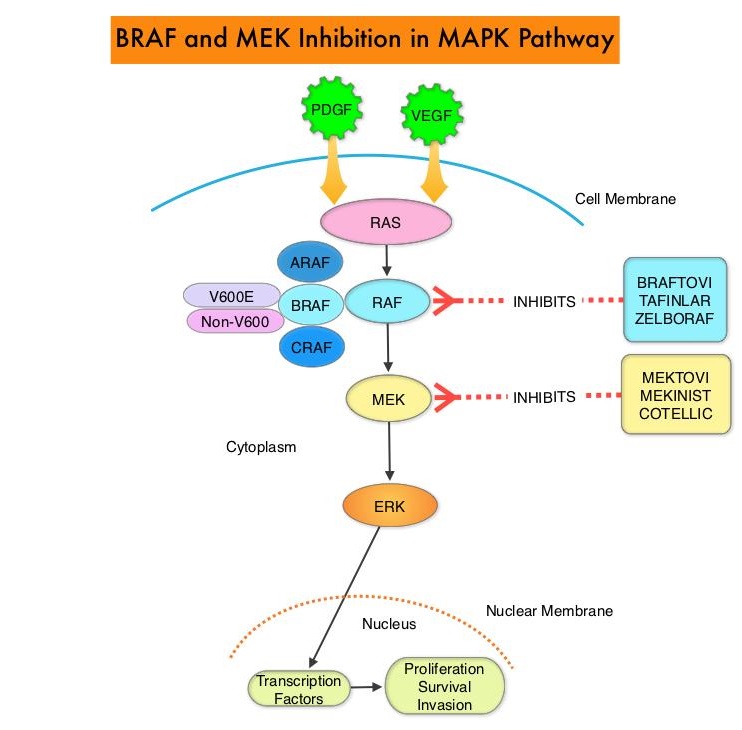 The Mitogen-Activated Protein Kinase pathway (MAPK pathway) is an important signaling pathway which enables the cell to respond to external stimuli. This pathway plays a dual role, regulating cytokine production and participating in cytokine dependent signaling cascade. The MAPK pathway of interest is the RAS-RAF-MEK-ERK pathway. The RAF family of kinases includes ARAF, BRAF and CRAF signaling molecules. BRAF is a very important intermediary of the RAS-RAF-MEK-ERK pathway. The BRAF V600E mutations results in constitutive activation of the MAP kinase pathway. Inhibiting BRAF can transiently reduce MAP kinase signaling. However, this can result in feedback upregulation of EGFR signaling pathway, which can then reactivate the MAP kinase pathway. This aberrant signaling can be blocked by dual inhibition of both BRAF and EGFR. However, BRAF V600E-mutated CRC is inherently less sensitive to BRAF inhibition than melanoma. BRAFTOVI® (Encorafenib) is a BRAF inhibitor and has target binding characteristics that differ from other BRAF inhibitors such as ZELBORAF® (Vemurafenib) and TAFINLAR® (Dabrafenib), with a prolonged target dissociation half-life and higher potency. The combination of BRAFTOVI® along with anti-EGFR monoclonal antibody ERBITUX® (Cetuximab) showed promising activity in early-phase clinical trials.
The BEACON CRC (Binimetinib, Encorafenib, and Cetuximab Combined to Treat BRAF-Mutant Colorectal Cancer) trial is an international, multicenter, randomized, open-label, Phase III study in which the efficacy and safety of BRAFTOVI® plus ERBITUX® with or without a MEK inhibitor MEKTOVI® (Binimetinib), was compared with the investigators’ choice of ERBITUX® combined with either Irinotecan or Fluorouracil, Folinic acid, and Irinotecan, in patients with BRAF V600E-mutant mCRC, whose disease has progressed after one or two prior regimens. In this trial, 665 patients were randomly assigned in a 1:1:1 ratio to receive either triplet therapy of BRAFTOVI® 300 mg orally daily, MEKTOVI® 45 mg orally twice daily, and ERBITUX® 400 mg/m2 IV as an initial dose, then 250 mg/m2 IV weekly (N=224), doublet-therapy of BRAFTOVI® and ERBITUX® administered in the same doses and on the same schedule as the triplet regimen (N=220) or investigators’ choice of ERBITUX® combined with either Irinotecan or Fluorouracil, Folinic acid, and Irinotecan (N=221). Patients were stratified according to previous Irinotecan use and treatment was administered in 28-day cycles until disease progression. The co-Primary end points were Overall Survival (OS) in the triplet-therapy group as compared with the control group and Secondary end points included OS in the doublet-therapy group as compared with the control group, as well as PFS, Duration of Response, and Safety in all groups. This study was not powered to compare the triplet-therapy group against the doublet-therapy group.
At the time of prespecified interim analysis, with a median duration of follow up for survival at 7.8 months across the three groups, the median OS was 9.0 months in the triplet-therapy group and 5.4 months in the control group (HR for death=0.52; P<0.001). This represented 48% reduction in the risk of death in the triplet-therapy group. The confirmed Response Rate was 26% in the triplet-therapy group and 2% in the control group (P<0.001). The median OS in the doublet-therapy group was 8.4 months (HR for death versus control=0.60; P<0.001).
The authors in this updated analysis focused on the patient-reported Quality of Life (QOL) assessments from this study. QOL assessments using 4 validated QOL measures were secondary endpoints in the trial. They included EORTC QOL Questionnaire (QLQ C30), Functional Assessment of Cancer Therapy Colon Cancer (FACT C), EuroQol 5D 5L, and Patient Global Impression of Change (PGIC). The risk of QOL deterioration was reduced by 45% (HR=0.55) and 44% (HR=0.56), using EORTC QLQ C30 and FACT C assessments respectively, in favor of the triplet regimen over control. Similar findings were observed when the doublet-therapy regimen was compared with the regimen in the control group, and when QOL assessments were made using the other two QOL measures (EuroQol 5D 5L and PGIC). There was however no significant differences in QOL when the triplet and doublet regimen groups were compared.
It was concluded based on this updated analysis of the BEACON CRC trial, that among patients with BRAF V600E-mutant metastatic Colorectal Cancer, a combination of BRAFTOVI® plus ERBITUX® with or without a MEK inhibitor MEKTOVI®, demonstrated longer maintenance of QOL on patient-reported assessments, compared to the current standard of care. Encorafenib plus cetuximab with or without binimetinib for BRAF V600E-mutant metastatic colorectal cancer: Quality-of-life results from a randomized, three-arm, phase III study versus the choice of either irinotecan or FOLFIRI plus cetuximab (BEACON CRC). Kopetz S, Grothey A, Van Cutsem E, et al. J Clin Oncol. 2020;38(suppl 4; abstr 8).