SUMMARY: ColoRectal Cancer (CRC) is the third most common cancer diagnosed in both men and women in the United States. The American Cancer Society estimates that approximately 140,250 new cases of CRC will be diagnosed in the United States in 2018 and about 50,630 patients are expected to die of the disease. The lifetime risk of developing CRC is about 1 in 21 (4.7%). Advanced colon cancer is often incurable and standard chemotherapy when combined with anti EGFR (Epidermal Growth Factor Receptor) targeted monoclonal antibodies such as VECTIBIX® (Panitumumab) and ERBITUX® (Cetuximab) as well as anti VEGF agent AVASTIN® (Bevacizumab), have demonstrated improvement in Progression Free Survival (PFS) and Overall Survival (OS). The benefit with anti EGFR agents however is only demonstrable in patients with metastatic CRC, whose tumors do not harbor KRAS mutations in codons 12 and 13 of exon 2 (KRAS Wild Type). It is now also clear that even among the KRAS Wild Type patients, about 15-20% have other rare mutations such as NRAS and BRAF mutations, which confer resistance to anti EGFR agents. Patients with stage IV colorectal cancer are now routinely analyzed for extended RAS and BRAF mutations. KRAS mutations are predictive of resistance to Epidermal Growth Factor Receptor (EGFR) targeted therapy. Approximately 5-10% of all metastatic CRC tumors present with BRAF V600E mutations and BRAF V600E is recognized as a marker of poor prognosis in this patient group. These patients tend to have aggressive disease with a higher rate of peritoneal metastasis and do not respond well to standard treatment intervention. Approximately 25% of the BRAF-mutated population in the metastatic setting has MSI-High tumors, but MSI-High status does not confer protection to this patient group. 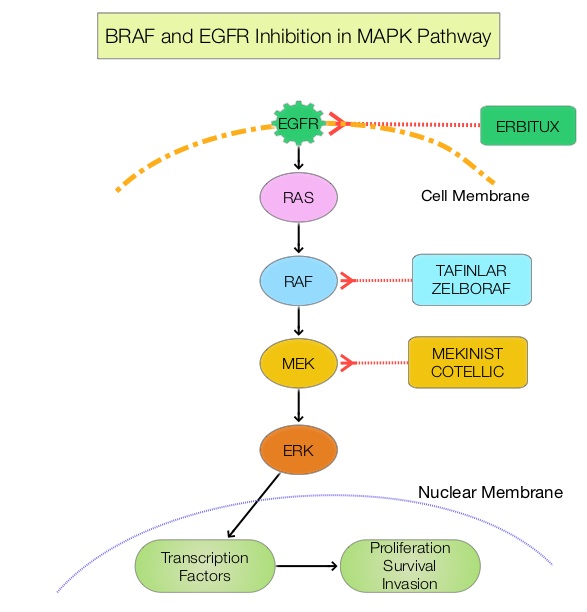 The Mitogen-Activated Protein Kinase pathway (MAPK pathway) is an important signaling pathway which enables the cell to respond to external stimuli. This pathway plays a dual role, regulating cytokine production and participating in cytokine dependent signaling cascade. The MAPK pathway of interest is the RAS-RAF-MEK-ERK pathway. The RAF family of kinases includes ARAF, BRAF and CRAF signaling molecules. BRAF is a very important intermediary of the RAS-RAF-MEK-ERK pathway. The BRAF V600E mutations results in constitutive activation of the MAP kinase pathway. Inhibiting BRAF can transiently reduce MAP kinase signaling. However, this can result in feedback upregulation of EGFR signaling pathway, which can then reactivate the MAP kinase pathway. This aberrant signaling can be blocked by dual inhibition of both BRAF and EGFR.

ZELBORAF® (Vemurafenib), is a selective oral inhibitor of mutated BRAF whereas ERBITUX® is a monoclonal antibody targeting Epidermal Growth Factor Receptor (EGFR). In a phase II SWOG trial (SWOG 1406), the addition of ZELBORAF® to the combination of CAMPTOSAR® (Irinotecan) and ERBITUX® resulted in a 58% reduction in the risk of disease progression and a higher Disease Control Rate, suggesting that simultaneous EGFR and BRAF inhibition (Dual Inhibition) is effective in BRAF V600 mutated ColoRectal Cancer.

Unlike primary colorectal cancer, the association of BRAF V600E and non-V600E mutations with survival and tumor recurrence after resection of ColoRectal Liver Metastases (CRLM), has remained unclear. This present study was conducted to investigate the prognostic association of BRAF mutations with survival and recurrence independently, and to understand how BRAF mutations compared with other prognostic determinants, such as KRAS mutations. This cohort study enrolled 853 patients with colorectal tumors and liver metastases, of whom 849 patients were evaluable and included in the study analyses. All patients underwent resection of their ColoRectal Liver Metastases with a curative intent from January 1, 2000, through December 31, 2016, at institutions participating in the International Genetic Consortium for Colorectal Liver Metastasis and had available data on BRAF and KRAS mutational status. The median age was 60 years, and 60% were male. The main outcomes and measures were the association of BRAF V600E and non-V600E mutations with Disease Free Survival (DFS) and Overall Survival (OS).

It was concluded that the presence of BRAF V600E mutation was associated with worse prognosis and increased risk of recurrence, and BRAF V600E mutation was not only a stronger prognostic factor than KRAS but also was the strongest prognostic determinant in the overall cohort. It remains to be seen if BRAF V600E mutated metastatic colorectal tumors would have better outcomes with targeted triplet combination therapies such as ZELBORAF® CAMPTOSAR® and ERBITUX® or TAFINLAR® (Dabrafenib-BRAF inhibitor), MEKINIST® (Trametinib-MEK inhibitor) and VECTIBIX®. Association of BRAF Mutations With Survival and Recurrence in Surgically Treated Patients With Metastatic Colorectal Liver Cancer. Margonis, GA, Buettner, S, Andreatos, N, et al. JAMA Surg. 2018;153(7):e180996. doi:10.1001/jamasurg.2018.0996