SUMMARY: The FDA on November 26, 2018, granted accelerated approval to VITRAKVI® (Larotrectinib) for adult and pediatric patients with solid tumors that have a NeuroTrophic Receptor tyrosine Kinase (NTRK) gene fusion without a known acquired resistance mutation, that are either metastatic or where surgical resection is likely to result in severe morbidity, and who have no satisfactory alternative treatments or whose cancer has progressed following treatment. This is the second tissue-agnostic FDA approval for the treatment of cancer. Tumor genomic profiling enables the identification of specific genomic alterations and thereby can provide personalized treatment options with targeted therapies that are specific for those molecular targets. The FDA in May 2017 granted accelerated approval to KEYTRUDA® (Pembrolizumab), for adult and pediatric patients with unresectable or metastatic, MicroSatellite Instability-High (MSI-H) or MisMatch Repair deficient (dMMR) solid tumors. This was the first FDA approval of a systemic cancer treatment, based on a specific genetic biomarker, independent of tumor origin (first tissue/site-agnostic approval).

A genomic test can be performed on a tumor specimen or on cell-free DNA in plasma (“liquid biopsy”). ImmunoHistoChemistry (IHC) test can be performed on tumor tissue for protein expression that demonstrates a genomic variant known to be a drug target, or to predict sensitivity to a chemotherapeutic drug. Next-generation sequencing (NGS) platforms or second-generation sequencing unlike the first-generation sequencing, known as Sanger sequencing, perform massively parallel sequencing, which allows sequencing of millions of fragments of DNA from a single sample. With this high-throughput sequencing, the entire genome can be sequenced in less than 24 hours. Recently reported genomic profiling studies performed in patients with advanced cancer suggest that actionable mutations are found in 20-40% of patients’ tumors. Next-generation sequencing has enabled the detection of Neurotrophic Tropomyosin Receptor Kinase (NTRK) gene fusions, which was first discovered in colon cancer in 1982. The three TRK family of Tropomyosin Receptor Kinase (TRK) transmembrane proteins TRKA, TRKB, and TRKC are encoded by Neurotrophic Tropomyosin Receptor Kinase genes NTRK1, NTRK2, and NTRK3, respectively. These receptor tyrosine kinases are expressed in human neuronal tissue and are involved in a variety of signaling events such as cell differentiation, cell survival and apoptosis of peripheral and central neurons. They therefore play an essential role in the physiology of development and function of the nervous system. There are over 50 different partner genes that fuse with NTRK genes. Chromosomal fusion involving NTRK genes arise early in cancer development and remain so as tumors grow and metastasize. Gene fusions involving NTRK genes lead to transcription of chimeric TRK proteins which can confer oncogenic potential by increasing cell proliferation and survival. Early clinical evidence suggests that these gene fusions lead to oncogene addiction regardless of tissue of origin. (Oncogene addiction is the dependency of some cancers on one or a few genes for the maintenance of the malignant phenotype). It is estimated that gene fusions involving NTRK genes occurs in about 0.5% to 1% of many common malignancies but in more than 90% of certain rare tumor types, such as salivary gland tumors, a form of juvenile breast cancer, and infantile fibrosarcoma. 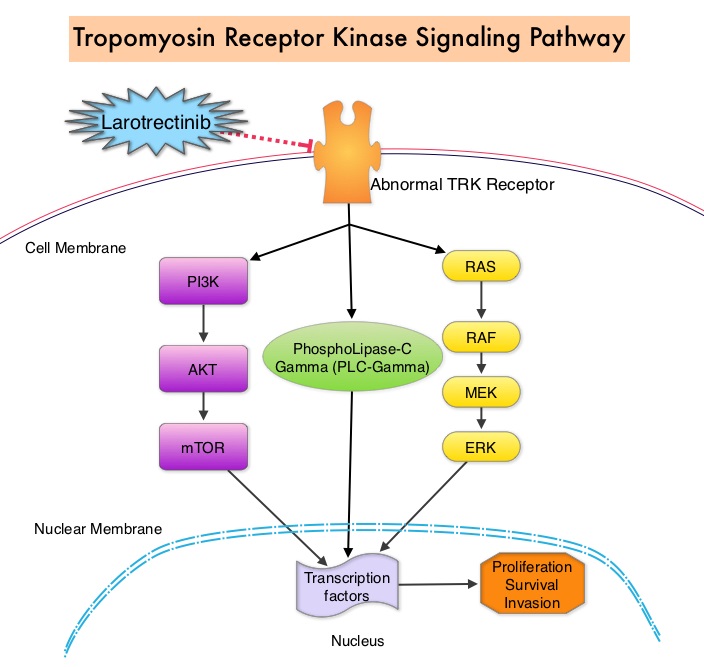 The approval of VITRAKVI®, a potent and highly selective, oral, small molecule inhibitor of all three TRK proteins was based on data from three multicenter, open-label, single-arm clinical trials – LOXO-TRK-14001, a phase I study involving adults, SCOUT, a phase I-II study involving children and NAVIGATE, a phase II study involving adolescents and adults. The authors in this development program included patients of any age and with any tumor type who had chromosomal fusion involving NTRK genes (Age and Tumor agnostic therapy). Positive NTRK gene fusion status was prospectively determined in local laboratories using NGS or Fluorescence In Situ Hybridization (FISH). Treatment efficacy was evaluated in the first 55 patients with unresectable or metastatic solid tumors harboring an NTRK gene fusion enrolled across the three trials. All patients were required to have progressed following systemic therapy for their disease if available, or would have required surgery with significant morbidity for locally advanced disease. Twelve patients were less than 18 years of age. A total of 12 cancer types were represented, with the most common being salivary gland tumors (22%), soft tissue sarcoma (20%), infantile fibrosarcoma (13%), and thyroid cancer (9%). NTRK gene fusions were inferred in three pediatric patients with infantile fibrosarcoma who had a documented ETV6 translocation by FISH. The Primary end point for the combined analysis was the Overall Response Rate (ORR) according to Independent review. Secondary end points included Duration of Response, Progression Free Survival, and safety.

It was concluded that TRK fusions defined a unique molecular subgroup of advanced solid tumors in children and adults and VITRAKVI® had marked and durable antitumor activity in patients with TRK fusion-positive cancer, regardless of age of the patient or tumor type. Efficacy of Larotrectinib in TRK Fusion–Positive Cancers in Adults and Children. Drilon A, Laetsch TW, Kummar S, et al. N Engl J Med 2018; 378:731-739