SUMMARY: The FDA on May 1, 2018 approved KYMRIAH®, a CD19-directed genetically modified autologous T-cell immunotherapy, for adult patients with Relapsed or Refractory Large B-Cell Lymphoma, after two or more lines of systemic therapy including Diffuse Large B-Cell Lymphoma (DLBCL) Not Otherwise Specified (NOS), High grade B-Cell Lymphoma and DLBCL arising from Follicular Lymphoma. The American Cancer Society estimates that in 2018, about 74,680 people will be diagnosed with Non Hodgkin Lymphoma (NHL) in the United States and about 19,910 individuals will die of this disease. Diffuse Large B-Cell Lymphoma is the most common of the aggressive Non-Hodgkin lymphomas in the United States, and the incidence has steadily increased 3-4% each year. The etiology of DLBCL is unknown. Contributing risk factors include immunosuppression (AIDS, transplantation setting, autoimmune diseases), ultraviolet radiation, pesticides, hair dyes, and diet.

What is (CAR) T-cell immunotherapy?

Chimeric Antigen Receptor (CAR) T-cell therapy is a type of immunotherapy and consists of T cells collected from the patient’s blood in a leukapheresis procedure, and genetically engineered to produce special receptors on their surface called Chimeric Antigen Receptors (CAR). These reprogrammed cytotoxic T cells with the Chimeric Antigen Receptors on their surface are now able to recognize a specific antigen on tumor cells. These genetically engineered and reprogrammed CAR T-cells are grown in the lab and are then infused into the patient. These cells in turn proliferate in the patient’s body and the engineered receptor on the cell surface help recognize and kill cancer cells that expresses that specific antigen. KYMRIAH® (genetically engineered T-cells) seeks out cancer cells expressing the antigen CD19, which is found uniquely on B cells and destroy them. Patients, following treatment with CAR T-cells, develop B-cell aplasia (absence of CD19 positive cells) due to B-cell destruction and may need immunoglobin replacement. Hence, B-cell aplasia can be a useful therapeutic marker, as continued B-cell aplasia has been seen in all patients who had sustained remission, following CAR T-cell therapy. Cytokine Release Syndrome, an inflammatory process is the most common and serious side effect of CAR T-cell therapy and is associated with marked elevation of Interleukin-6. Cytokine release is important for T-cell activation and can result in high fevers and myalgias. This is usually self limiting although if severe can be associated with hypotension and respiratory insufficiency. Tocilizumab (ACTEMRA®), an Interleukin-6 receptor blocking antibody produces a rapid improvement in symptoms. This is however not recommended unless the symptoms are severe and life threatening, as blunting the cytokine response can in turn negate T-cell proliferation. Elevated serum Ferritin and C-reactive protein levels are surrogate markers for severe Cytokine Release Syndrome. 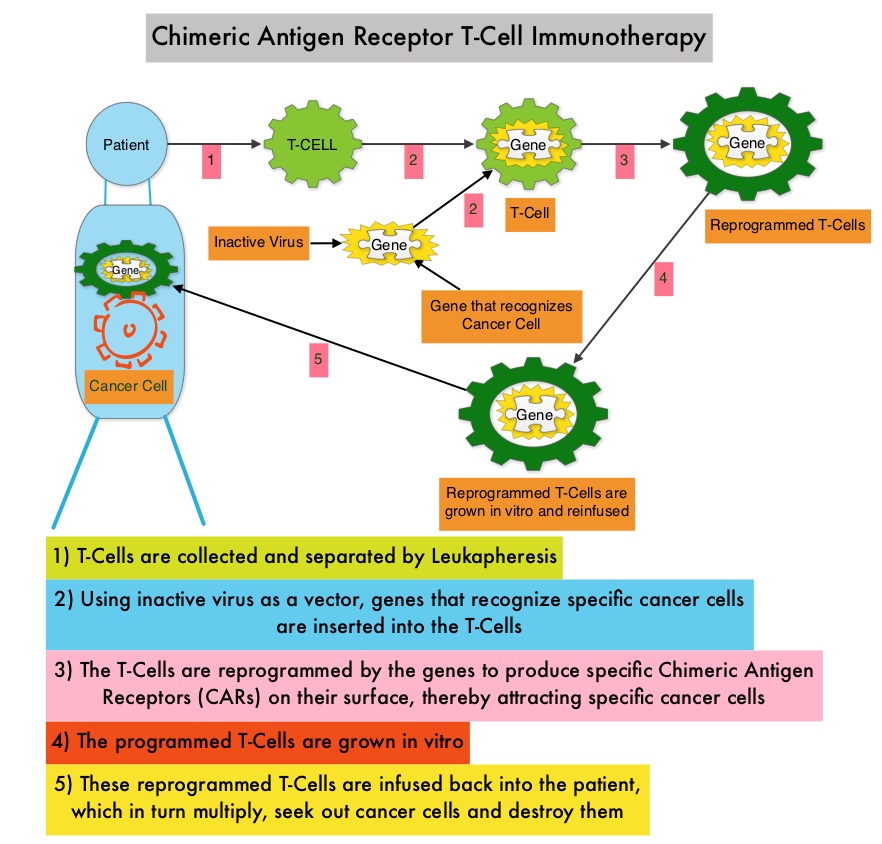 The CAR T-cells have been shown to also access sanctuary sites such as the central nervous system and eradicate cancer cells. CD19 antigen is expressed by majority of the B-cell malignancies and therefore most studies using CAR T-cell therapy have focused on the treatment of advanced B-cell malignancies such as Chronic Lymphocytic Leukemia (CLL), Acute Lymphoblastic Leukemia (ALL) and Non Hodgkin lymphoma (NHL), such as Diffuse Large B-Cell Lymphoma (DLBCL).

The approval of KYMRIAH® was based on a single-arm, open-label, multi-center, global, pivotal phase II trial (JULIET), in adults with Relapsed or Refractory DLBCL and DLBCL after transformation from Follicular lymphoma. The study enrolled 147 patients, 99 of whom received the CAR T-cell infusion with a single dose of KYMRIAH®, which was manufactured at 2 sites (United States and Germany). Eligible patients were 18 years or older with Relapsed or Refractory DLBCL and had progressed after receiving two or more lines of chemotherapy, including an Anthracycline and Rituximab, and were ineligible for or failed Autologous Stem Cell Transplant (auto-SCT). The median number of prior lines of therapy was 3 and 47% of patients had prior auto-SCT. Prior to infusion with KYMRIAH®, 90% of patients received bridging therapy, 93% received lymphodepleting chemotherapy, which in most patients consisted of Fludarabine/Cyclophosphamide. The median age was 56 years and 77% of patients had Stage III or IV disease at the time of enrollment. The median time from infusion to data cutoff was 5.6 months. The Primary endpoint was best Overall Response Rate-ORR (Complete Response-CR + Partial Response-PR), per independent review committee.

In this primary analysis, the authors reported the outcomes among 81 patients who received KYMRIAH® manufactured in the United States, with more than 3 months of follow up. The Objective Response Rate was 53%, the Complete Response rate was 39.5% and Partial Response rate 13.6%. At month 3, the CR rate was 32% and the PR rate 6%. Among patients evaluable at 6 months (N=46), the CR Rate was 30% and PR rate was 7%. Response rates were consistent across prognostic subgroups, including those who received prior auto-SCT and those with Double-Hit lymphoma. The median Duration of Response and the median Overall Survival were not reached. The 6-month probability of being relapse free was 73.5% and the 6-month probability of Overall Survival was 64.5%. Grade 3 or 4 adverse events were reported in 86% of the patients and Cytokine-Release Syndrome occurred in 58%. CRS was managed with ACTEMRA® in 15% of patients with good response and 11% of patients received corticosteroids. Neurologic adverse events were reported in 12% of patients. No deaths were attributed to KYMRIAH®.