SUMMARY: The FDA on May 23, 2017, granted accelerated approval to KEYTRUDA® (Pembrolizumab) for adult and pediatric patients with unresectable or metastatic, MicroSatellite Instability-High (MSI-H) or MisMatch Repair Deficient (dMMR) solid tumors that have progressed following prior treatment and who have no satisfactory alternative treatment options or with MSI-H or dMMR ColoRectal cancer that has progressed following treatment with a Fluoropyrimidine, Oxaliplatin, and Irinotecan.

The DNA MisMatchRepair (MMR) system is responsible for molecular surveillance and works as an editing tool that identifies errors within the microsatellite regions of DNA and removes them. Defective MMR system leads to MSI (Micro Satellite Instability) and hypermutation, triggering an enhanced antitumor immune response. MSI (Micro Satellite Instability) is therefore a hallmark of defective/deficient DNA MisMatchRepair (MMR) system and occurs in 15% of all colorectal cancers. Defective MisMatchRepair can be a sporadic or heritable event. Approximately 65% of the MSI colon tumors are sporadic and when sporadic, the DNA MisMatchRepair gene is MLH1. Defective MisMatchRepair can also manifest as a germline mutation occurring in 1 of the 4 MisMatchRepair genes which include MLH1, MSH2, MSH6, PMS2. This produces Lynch Syndrome (Hereditary Nonpolyposis ColoRectal Carcinoma – HNPCC), an autosomal dominant disorder and is the most common form of hereditary colon cancer, accounting for 35% of the MSI colorectal cancers. MSI tumors tend to have better outcomes and this has been attributed to the abundance of tumor infiltrating lymphocytes in these tumors from increased immunogenicity. These tumors are susceptible to PD-1 blockade and respond to treatment with checkpoint inhibitors such as KEYTRUDA® (N Engl J Med 372:2509-2520, 2015). Other MSH-H and dMMR tumors include, Endometrial and GastroIntestinal tumors and to a lesser extent Breast, Prostate, Bladder and Thyroid tumors. 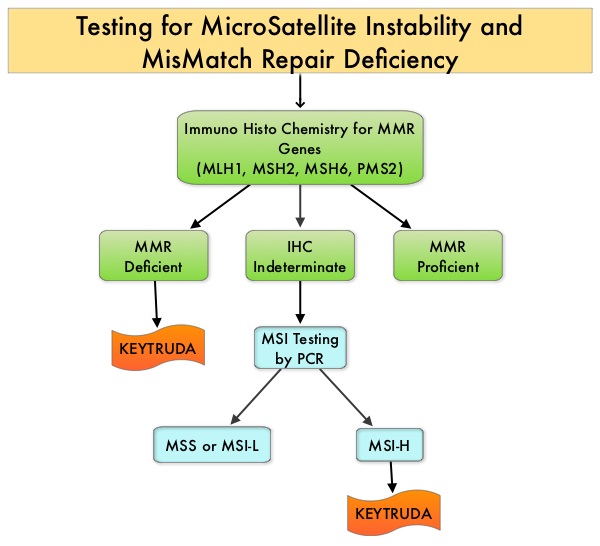 MSI (Micro Satellite Instability) testing is performed using a PCR based assay and MSI-High refers to instability at 2 or more of the 5 mononucleotide repeat markers and MSI-Low refers to instability at 1 of the 5 markers. Patients are considered Micro Satellite Stable (MSS) if no instability occurs. MSI-L and MSS are grouped together because MSI-L tumors are uncommon and behave similar to MSS tumors. Tumors considered MSI-H have deficiency of one or more of the DNA MisMatchRepair genes. MMR gene deficiency can be detected by ImmunoHistoChemistry (IHC). MLH1 gene is often lost in association with PMS2.

KEYTRUDA® is a fully humanized, Immunoglobulin G4, anti-PD-1, monoclonal antibody, that binds to the PD-1 receptor and blocks its interaction with ligands PD-L1 and PD-L2, thereby undoing PD-1 pathway-mediated inhibition of the immune response and unleashing the tumor-specific effector T cells. This unique FDA approval was based on data from 149 patients with MSI-H or dMMR tumors (15 cancer types), enrolled across five uncontrolled, multi-cohort, multi-center, single-arm clinical trials. Ninety patients had colorectal cancer and 59 patients were diagnosed with one of 14 other cancer types. KEYTRUDA® was administered at 200 mg IV every 3 weeks or 10 mg/kg every 2 weeks until disease progression or unacceptable toxicity, for a maximum period of 24 months. The median age was 55 years and over a third of the patients were 65 yrs or older. The major efficacy outcome measures were Objective Response Rate (ORR) and Duration of Response. The identification of MSI-H or dMMR tumor status for the majority of patients (135/149) was prospectively determined using local laboratory-developed, Polymerase Chain Reaction (PCR) tests for MSI-H status or ImmunoHistoChemistry (IHC) tests for MMR deficiency.

The Objective Response Rate (ORR) with KEYTRUDA® was 39.6% with 7.4% Complete Responses and 32.2% Partial Responses. The ORR was 36% in patients diagnosed with ColoRectal Cancer and 46% in patients with any of the other cancer types. Responses lasted six months or more for 78% of those patients, who responded to KEYTRUDA®.

The most common toxicities included fatigue, rash, pruritus, nausea, diarrhea, decreased appetite, cough and dyspnea. Pembrolizumab is associated with immune-mediated side effects, including pneumonitis, colitis, hepatitis, endocrinopathies, and nephritis. The Prescribing Information for KEYTRUDA® includes a “Limitation of Use” stating that the safety and effectiveness of KEYTRUDA® in pediatric patients with MSI-H Central Nervous System cancers have not been established.

This is the first FDA approval of a cancer treatment, based on specific genetic biomarker, rather than location in the body where the tumor originated.