SUMMARY: Breast cancer is the most common cancer among women in the US and about 1 in 8 women (12%) will develop invasive breast cancer during their lifetime. Approximately, 255,180 new cases of invasive breast cancer will be diagnosed in 2017 and over 41,070 women will die of the disease. The HER or erbB family of receptors consist of HER1, HER2, HER3 and HER4. Approximately 15%-20% of invasive breast cancers overexpress HER2/neu oncogene, which is a negative predictor of outcomes without systemic therapy. HERCEPTIN® (Trastuzumab) is a humanized monoclonal antibody targeting HER2. It binds to the extracellular domain of the receptor and blocks the downstream cell signaling pathways (PI3K-AKT pathway) and induces Antibody Dependent Cellular Cytotoxicity (ADCC). HERCEPTIN® in combination with chemotherapy has been proven to significantly improve Progression Free Survival and Overall Survival in patients with advanced breast cancer. Despite this benefit, majority of these patients develop progressive disease within 18 months. The tumors in these patients continue to express HER2 although the lower sensitivity to HER2 targeted agents has been attributed to HER2 independent escape mechanisms. Treatment strategies for this patient population have included switching chemotherapy in subsequent lines of treatment and continuing HERCEPTIN®, combining another HER2 targeted agent, Lapatinib (TYKERB®) with Capecitabine (XELODA®) and dual HER2 inhibition with a combination of HERCEPTIN® and TYKERB®. 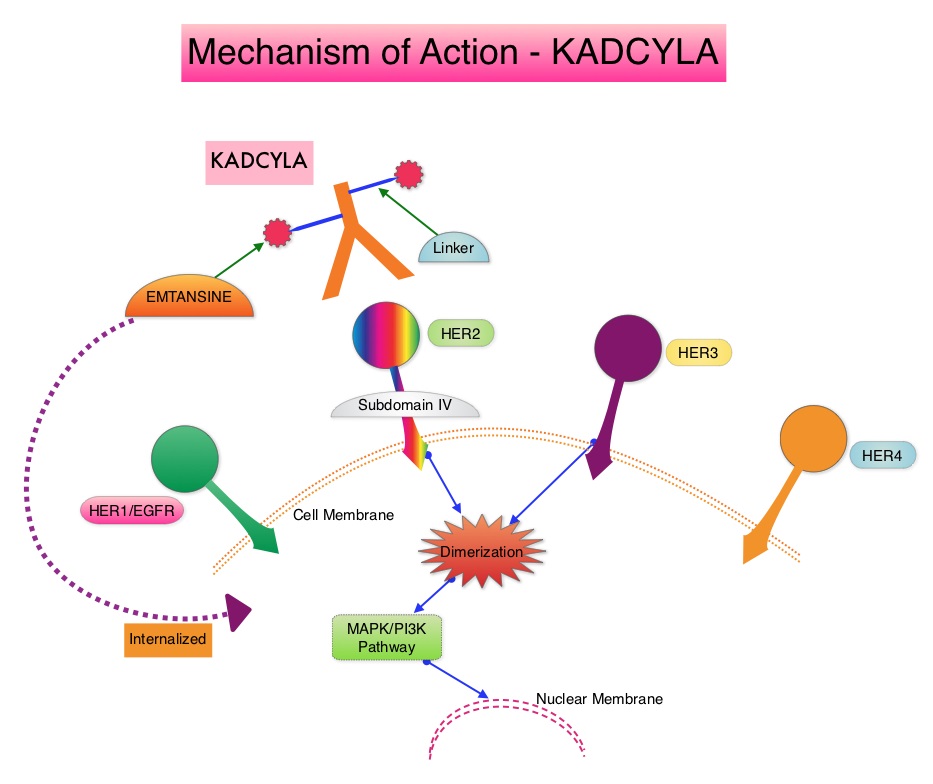 KADCYLA® (Ado-Trastuzumab Emtansine, T-DM1) is an Antibody-Drug Conjugate (ADC) comprised of the antibody HERCEPTIN® and the chemotherapy agent Emtansine, linked together. Upon binding to the HER2 receptor, it not only inhibits the HER2 signaling pathways but also delivers a chemotherapy agent Emtansine, a microtubule inhibitor, directly inside the tumor cells. This agent is internalized by lysosomes and destroys the HER2-positive tumor cells upon intracellular release. In the EMILIA trial, KADCYLA® was associated with significant increase in Overall Survival when compared with TYKERB® plus XELODA®, in HER2-positive metastatic breast cancer patients, who had previously received HERCEPTIN® and a taxane.

TH3RESA is an open label randomized phase III trial in which KADCYLA® was compared with treatment of physician’s choice, in patients with unresectable locally advanced, recurrent or metastatic breast cancer. Eligible patients had a left ventricular ejection fraction of 50% or more and had HER2-positive advanced breast cancer and had received two or more HER2-directed regimens in the advanced setting, and had progressed on both HERCEPTIN® and TYKERB® containing regimens in metastatic setting, and also had disease progression on a taxane, in any setting. Patients were randomized in a 2:1 ratio to receive either KADCYLA® 3.6 mg/kg IV every 21 days (N=404) or treatment of physician’s choice (N=198), which included HER2 directed therapy for the majority of patients. Treatment was continued until disease progression or unmanageable toxicity. The Co-primary endpoints were Progression Free Survival (PFS) and Overall Survival (OS). Secondary endpoints included Response Rates, Duration of Response, Safety and Quality of Life. The authors had previously reported a significant improvement in PFS with KADCYLA® compared with physician's treatment choice (6.2 months vs 3.3 months, HR= 0.528, P<0.0001) and an OS trend favoring KADCYLA®.

The authors now reported the results from the final Overall Survival analysis of the TH3RESA trial. At data cutoff, 47% of the patients in the physician's choice group had crossed over to KADCYLA®. The Overall Survival was significantly longer with KADCYLA® compared with treatment of physician's choice (median 22.7 months versus 15.8 months, HR=0.68, P=0.0007). This benefit was seen in all pre-specified subgroups. Patients in the KADCYLA® group had a lower incidence of grade 3 toxicities compared to the patients in the physician’s treatment choice group (40% vs 47%). Grade 3 thrombocytopenia however was more common in the KADCYLA® group compared to the physician’s choice group (6% vs 3%) and this has been attributed to the inhibition of megakaryocyte differentiation by KADCYLA®.