SUMMARY: It is estimated that in the US, about 87,110 new cases of melanoma will be diagnosed in 2017 and about 9,730 patients will die of the disease. The incidence of melanoma has been on the rise for the past three decades. A better understanding of Immune checkpoints has opened the doors for the discovery of novel immune targets. Immune checkpoints are cell surface inhibitory proteins/receptors that harness the immune system and prevent uncontrolled immune reactions. Survival of cancer cells in the human body may be related to their ability to escape immune surveillance, by inhibiting T lymphocyte activation. Under normal circumstances, inhibition of an intense immune response and switching off the T cells of the immune system, is accomplished by Immune checkpoints or gate keepers. With the recognition of Immune checkpoint proteins and their role in suppressing antitumor immunity, antibodies have been developed that target the membrane bound inhibitory Immune checkpoint proteins/receptors such as CTLA-4 (Cytotoxic T-Lymphocyte Antigen 4, also known as CD152), PD-1(Programmed cell Death 1), etc. By blocking the Immune checkpoint proteins, one would expect to unleash the T cells, resulting in T cell proliferation, activation and a therapeutic response. 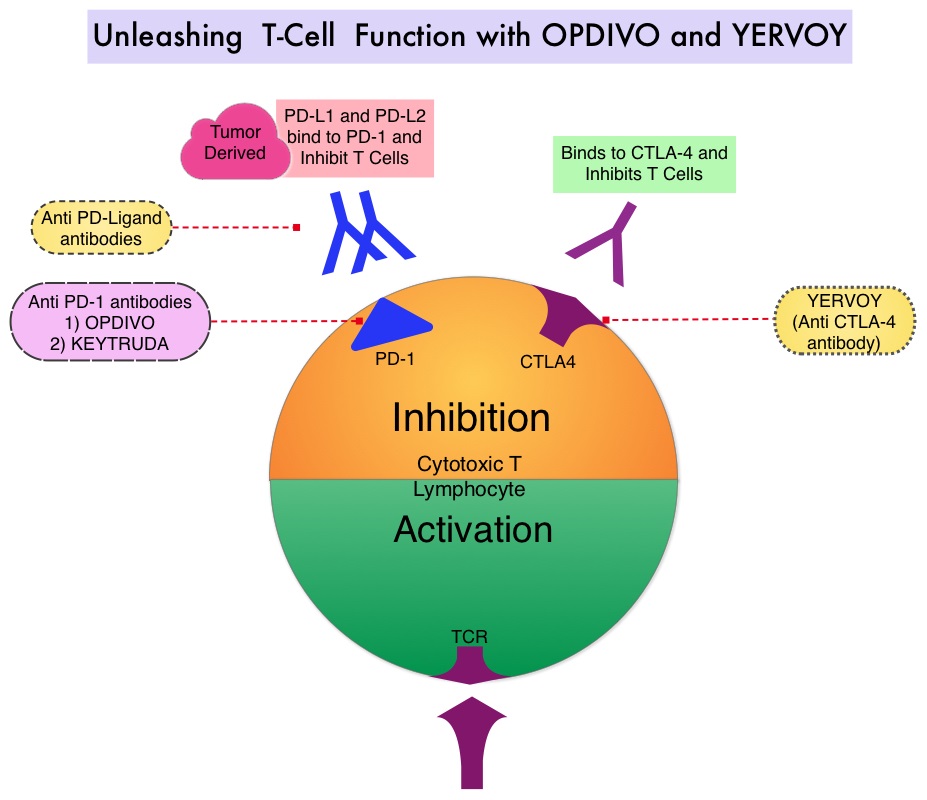 YERVOY® (Ipilimumab) is a fully human immunoglobulin G1 monoclonal antibody that blocks Immune checkpoint protein/receptor CTLA-4, and was the first systemic therapy to show prolonged Overall Survival (OS) among patients with advanced melanoma, in randomized phase III trials. YERVOY® in a pooled analysis of data from 12 studies showed a 3-year Overall Survival of 26% among treatment naive patients and survival up to 10 years in approximately 20% of all patients, with advanced melanoma. The two PD-1 inhibitors of interest are OPDIVO® (Nivolumab) and KEYTRUDA® (Pembrolizumab), which are fully human, Immunoglobulin G4, anti-PD-1 targeted monoclonal antibodies, which bind to the PD-1 receptor and block its interaction with ligands PD-L1 and PD-L2, following which the tumor-specific effector T cells are unleashed. They are thus able to undo PD-1 pathway-mediated inhibition of the immune response. When compared with YERVOY®, in patients with advanced melanoma, PD-1 inhibitors, both OPDIVO® and KEYTRUDA®, have demonstrated superior Overall Survival (OS), Progression Free Survival (PFS), and Objective Response Rate (ORR), with a better safety profile. OPDIVO® in combination with YERVOY® in a phase I study resulted in an Overall Survival of 68% at 3 years among patients with advanced melanoma, regardless of prior therapies.

CheckMate 067 is a phase III study which enrolled treatment naïve patients with advanced melanoma, and the authors in a previous publication reported significantly longer PFS and higher rates of ORR with OPDIVO® plus YERVOY® and with OPDIVO® alone, compared with single agent YERVOY®. In this publication, the authors provided the first analysis of 3-year OS data from the CheckMate 067 trial. In this double-blind, phase III study, patients with previously untreated advanced melanoma were randomly assigned in a 1:1:1 ratio to receive one of the three regimens: OPDIVO® 1 mg/kg every 3 weeks plus YERVOY® 3 mg/kg every 3 weeks for four doses, followed by OPDIVO® 3 mg/kg every 2 weeks (N=314); OPDIVO® 3 mg/kg every 2 weeks plus placebo (N=316); or YERVOY® 3 mg/kg every 3 weeks for four doses plus placebo (N=315). Randomization was stratified according to BRAF mutation status, metastasis stage, and Programmed cell Death Ligand 1 (PD-L1) status. Treatment was continued until disease progression or unacceptable toxicities. The two primary end points were PFS and OS in the OPDIVO® plus YERVOY® group and in the OPDIVO® group versus the YERVOY® group.