Prostate cancer is driven by Androgen Receptor (AR) and its signaling pathways. Initial treatment strategies for patients with metastatic prostate cancer include lowering the levels of circulating androgens with medical or surgical castration or blocking the binding of androgens to the Androgen Receptor (AR). Upon progression, (described as Castrate Resistant Prostate Cancer-CRPC, as these tumors are not androgen independent and continue to rely on Androgen Receptor), therapies directed at the Androgen Receptor , such as ZYTIGA® (Abiraterone acetate) and XTANDI® (Enzalutamide), and Taxanes such as TAXOTERE® (Docetaxel) and JEVTANA® (Cabazitaxel) are the most widely used drug classes in the United States. ZYTIGA® inhibits CYP17A1 enzyme and depletes adrenal and intratumoral androgens, thereby impairing AR signaling. XTANDI® competes with Testosterone and Dihydrotestosterone and avidly binds to the Androgen Receptor, thereby inhibiting AR signaling, and in addition inhibits translocation of the AR into the nucleus and thus inhibits the transcriptional activities of the AR. About 20-40% of the patients do not respond to therapies directed at the AR, and even those who respond will invariably develop resistance to these drugs. 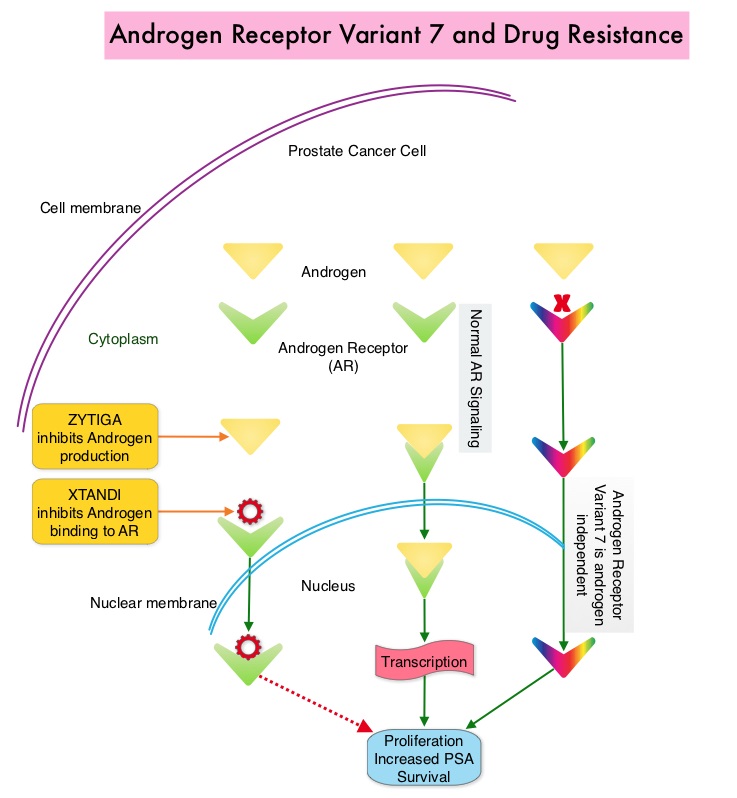 ZYTIGA® and XTANDI® are often the preferred choice for the first-line treatment of metastatic CRPC (mCRPC). In clinical practice, the majority of patients with mCRPC who progress on one of these agents receive the alternative agent, as there are no formal guidelines on how best to sequence these agents after progression on first-line AR signaling inhibition. Resistance to ZYTIGA® and XTANDI® has been attributed to persistent AR signaling by variant forms of Androgen Receptor, generated through somatic mutation or aberrant RNA splicing. Androgen Receptor splice Variant 7 (AR-V7) is the most widely studied and can be detected in the CTCs (Circulating Tumor Cells). AR-V7 does not have the domain to bind androgens and may be associated with resistance to XTANDI®. Further AR-V7 is constitutively active and can independently activate transcription factors and therefore is not affected by androgen depleting agents including ZYTIGA®. A critical unmet need is an assay that can detect AR-V7 protein in the peripheral blood (liquid biopsy), and accurately identify patients who are resistant to AR targeted therapies and who should instead switch to chemotherapy.

PROPHECY is a multicenter, prospective-blinded study, which evaluated the ability of baseline/pretreatment AR-V7 status in CTCs, to predict treatment outcomes with ZYTIGA® or XTANDI®. The researchers enrolled 118 men with high-risk mCRPC starting ZYTIGA® or XTANDI® treatment, from five academic medical centers. Prior exposure to XTANDI® or ZYTIGA® was permitted for men who were planning to receive the alternative agent. Among the study patients, 55 were treated with ZYTIGA®, 58 were treated with XTANDI®, and five received both therapies concurrently. The median age was 73 years, 58% had a Gleason score sum of 8-10 and the median number of high-risk features was six.

Peripheral blood samples were obtained for CTCs analysis at baseline, and at the time of clinical, radiographic, or biochemical progression, and analyzed at two central laboratories, each blinded to the results of the other. AR-V7 in CTCs was detected using two blood-based assays, including the Epic Sciences CTC nuclear-specific AR-V7 protein assay and The Johns Hopkins University (JHU) modified-AdnaTest CTC AR-V7 mRNA assay. One of the unique aspects of this multicenter study was that laboratory investigators were blinded to the clinical results, and clinicians were blinded to the laboratory results, and the definitions of a positive test for AR-V7 were defined in advance, and thus prospectively validated. In this study, approximately 10-24% of men with high-risk mCRPC were AR-V7 positive at baseline, depending on the assay used. The Primary endpoint was Progression Free Survival (PFS) on the basis of radiographic or clinical progression and Secondary clinical end points included 50% or greater decline in PSA and Overall Survival (OS). The Primary objective was to validate the prognostic significance of baseline CTC AR-V7 on the basis of radiographic or clinical progression free-survival (PFS). The median follow up was 19.6 months.

It was noted that AR-V7 detection in CTCs by either of two different assays was independently associated with shorter PFS and OS, after adjusting for CTC number and clinical prognostic factors. There was very little evidence of clinical benefit from ZYTIGA® or XTANDI® in AR-V7 positive patients, with a very low probability of confirmed PSA decline (0-11%) or soft tissue responses (0-6%). The concordance between the two AR-V7 assays utilized in this study was 82%.