SUMMARY: The American Cancer Society estimates that 73,750 new cases of kidney and renal pelvis cancers will be diagnosed in the United States in 2020 and about 14,830 people will die from the disease. Renal Cell Carcinoma (RCC) is by far the most common type of kidney cancer and is about twice as common in men as in women. Modifiable risk factors include smoking, obesity, workplace exposure to certain substances and high blood pressure. The five year survival of patients with advanced RCC is less than 10% and there is significant unmet need for improved therapies for this disease. 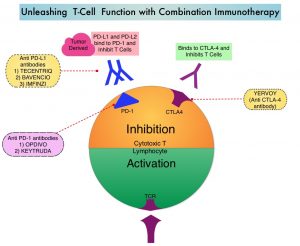 The FDA in 2018, approved combination immunotherapy, OPDIVO® (Nivolumab) plus YERVOY® (Ipilimumab), for the treatment of intermediate or poor-risk, previously untreated advanced Renal Cell Carcinoma (RCC), based on significantly higher Overall Survival (OS) and Objective Response Rates (ORR), compared with Sunitinib, a multikinase inhibitor (CheckMate 214). Subsequently, two studies, a combination of BAVENCIO® (Avelumab), a PD-L1 targeted monoclonal antibody and INLYTA® (Axitinib), a Receptor Tyrosine Kinase inhibitor (JAVELIN Renal-101), and KEYTRUDA® (Pembrolizumab), a PD-1 targeted monoclonal antibody and INLYTA® (KEYNOTE-426), demonstrated superior OS, compared to Sunitinib, and for the first time set the stage for the use of a combination of Immune Checkpoint Inhibitor (ICI) and targeted therapy as first line treatment in this patient population.

The safety and activity of the combination of YERVOY® and OPDIVO® in patients with prior exposure to anti-PD-1 pathway targeted therapy, but no prior exposure to anti-CTLA-4 pathway targeted therapy, remains unknown. The rationale behind combining YERVOY® and OPDIVO® is that these two agents act in different phases of the immune response. Blocking the PD-1/PD-L1 pathway does not induce antitumor immunity if antigen-specific CD8-positive T cells are not present in cancer tissues. However, blocking the CTLA-4 pathway leads to increased activation of CD8-positive cells in the lymph nodes as well as increased infiltration of activated CD8-positive T cells into the tumor. This mechanistic difference between an anti-PD-1 antibody and an anti-CTLA-4 targeted therapy may allow activity of anti-CTLA-4 antibody in combination with anti-PD-1 antibody, upon treatment failure on prior anti-PD-1 targeted therapy.

The median number of prior lines of therapy was 3 and all patients had received at least one prior therapy targeting the PD-1 pathway. About 76% of patients received an anti-PD-1 antibody, and 24% received an anti-PDL-1 antibody before receiving YERVOY® and OPDIVO® combination. Of the 45 patients included in this study, 60% received monotherapy with prior anti-PD-1 or anti-PDL-1 antibody, 18% received PD-1 pathway targeted Immune Checkpoint Inhibitor (ICI) in combination with a VEGF receptor inhibitor (Axitinib,Sunitinib, or Cabozantinib), 9% received an ICI in combination with Bevacizumab, and 13% received an ICI in combination with another agent . Approximately 71% of the study patients received one line of prior ICI therapy and 29% of the study patients had received more than one prior ICI regimen. The best Objective Response Rate to prior ICI therapy was a Partial Response Rate of 53%, Stable disease in 27%, and Progressive disease in 20%. The median time on prior ICIs was 13 months. The median age at the time of initiation of YERVOY® and OPDIVO® combination was 62 years and all patients had more than one metastatic site, and 38% had brain metastasis. Twenty percent of the patients were favorable risk on the basis of IMDC criteria, 64% were intermediate risk, 7% were poor risk, and 9% were unknown risk.

It was concluded from this study that YERVOY® and OPDIVO® combination demonstrated antitumor activity with acceptable toxicity in patients with metastatic Renal Cell Carcinoma, who had prior treatment with Immune Checkpoint Inhibitors, suggesting that responses are possible in a subset of patients with metastatic Renal Cell Carcinoma who are naïve to therapy with anti-CTLA-4 antibody, and had prior exposure to therapy targeting the PD-1 pathway. Salvage YERVOY® and OPDIVO® therapy after single-agent OPDIVO® is currently being evaluated in multiple clinical trials.