SUMMARY: It is estimated that in the United States approximately 13,000 people are diagnosed with MyeloDysplastic Syndromes (MDS) each year. MyeloDysplastic Syndromes are a heterogenous group of stem cell disorders characterized by marrow failure resulting in cytopenias with associated cytogenetic abnormalities, and abnormal cellular maturation with morphologic changes in clonal cells. Majority of the individuals diagnosed with MDS are aged 65 years and older and die as a result of infection and/or bleeding consequent to bone marrow failure. About a third of patients with MDS develop Acute Myeloid Leukemia (AML).
Patients with Lower-risk MDS (Revised IPSS-Very Low, Low, or Intermediate risk ) often present with symptomatic anemia and these patients are in chronic need for RBC transfusions which in turn can result in iron overload and can have a negative impact on quality of life and Overall Survival. These patients are treated with Erythropoiesis Stimulating Agents (ESAs) as first line therapy. ESAs such as Darbepoetin alfa and Epoetin alfa are re-engineered and recombinant DNA technology products of Erythropoietin (EPO), and they stimulate erythropoiesis by binding and activating the EPO receptor. However, transfusion-dependent patients with serum EPO levels above 200 U per liter are less likely to respond to ESAs. Additionally, patients with MDS with ring sideroblasts have a shorter median duration of response to ESAs, than those who do not have ring sideroblasts. Patients with Lower-risk MDS with chromosome 5q deletion (del 5q) who are transfusion dependent are treated with Lenalidomide, regardless of previous treatment with ESAs. In contrast, only 39% of patients with non-del(5q) Lower-risk MDS receive second line therapy besides RBC transfusions, and there are few treatment options for patients who are refractory to, unresponsive to, or ineligible for ESAs. There is therefore an unmet clinical need for safe and effective treatment options, to reduce the RBC transfusion burden in these patients. 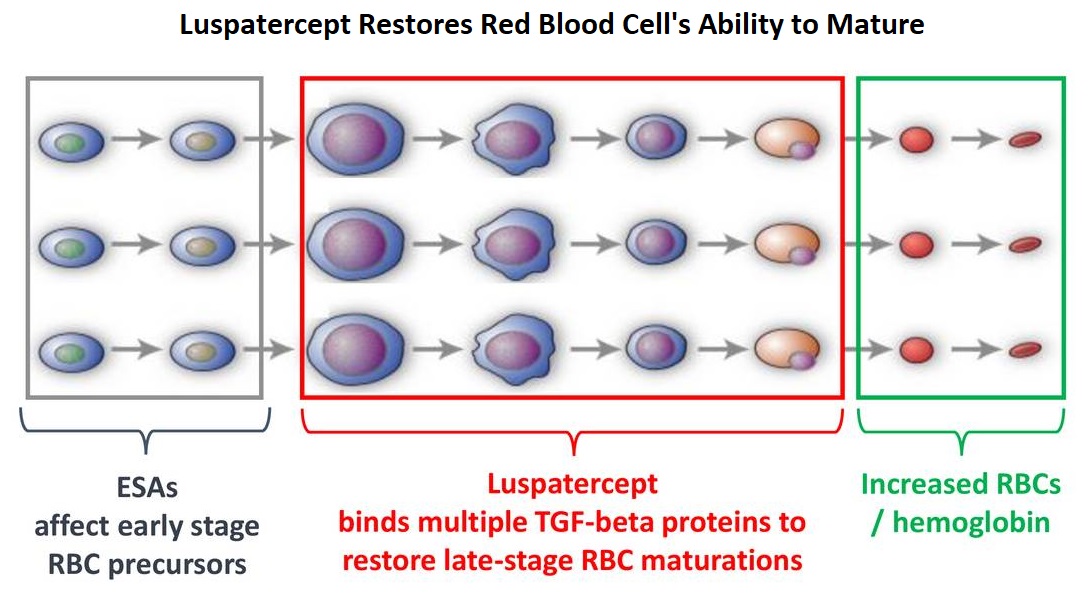 Signaling by the SMAD2 and SMAD3 pathway exerts an inhibitory effect on red cell maturation. This pathway is constitutively activated in the bone marrow cells of patients with MDS and diseases associated with ineffective erythropoiesis such as β-thalassemia. REBLOZYL® (Luspatercept) is a recombinant soluble fusion protein and is first-in-class erythroid maturation agent that enhances erythropoiesis by promoting late-stage Red Blood Cell precursor differentiation and maturation. It targets select Transforming Growth Factor (TGF)-β superfamily ligands such as GDF11, that regulate late-stage erythropoiesis. This results in a reduction in aberrant SMAD2 and SMAD3 signaling, thereby promoting late-stage RBC precursor differentiation and maturation. In a Phase II study, treatment of Lower-risk MDS patients with REBLOZYL® resulted in 38% of patients being transfusion independent for 8 weeks or longer and this benefit was even more so among patients with 15% or more ring sideroblasts.
The MEDALIST trial is a randomized, double-blind, placebo-controlled Phase III study which evaluated the efficacy and safety of REBLOZYL® in patients with anemia secondary to MDS, defined as Very Low-Risk, Low-Risk, or Intermediate-Risk with Ring Sideroblasts, according to the Revised International Prognostic Scoring System (R-IPSS). Eligible patients were refractory, intolerant, or ineligible to receive ESAs and required RBC transfusions. A total of 229 patients (N=229) were randomized 2:1 to receive either REBLOZYL® at a starting dose level of 1mg/kg SC with titration up to 1.75 mg/kg if needed (N=153), or placebo SC (N=76), every 3 weeks for 24 weeks or more. The median age was 71 years and median time from diagnosis was 41.8 months. Approximately 95% of patients had previously received ESAs and 90% had an SF3B1 mutation. The Primary endpoint was RBC transfusion independence for 8 weeks or more between week 1 and 24. A key Secondary endpoint was RBC transfusion independence for 12 weeks or more between week 1 and 24.
Among those receiving REBLOZYL®, 38% achieved the Primary endpoint of RBC transfusion independence for 8 weeks or more, compared with 13% receiving placebo (P<0.001). Further among those receiving REBLOZYL®, 28% achieved the key Secondary endpoint of RBC transfusion independence for 12 weeks or more compared with 8% receiving placebo (P<0.001). The median duration of the longest, single continuous period of response to REBLOZYL® was 30.6 weeks, and 13.6 weeks in the placebo group. Among patients who had a baseline transfusion burden of 4 to less than 6 units per 8 weeks, 37% of those in the REBLOZYL® group and 4% of those in the placebo group had a response. Additionally, patients receiving REBLOZYL® were more likely to achieve an mHI-E (modified Hematologic Improvement-Erythroid) response, (defined as a reduction in transfusion of 4 or more RBC units per 8 weeks or a mean hemoglobin increase of 1.5 g/dL or more per 8 weeks, in the absence of transfusions), compared with patients receiving placebo (53% versus 12% during weeks 1-24; P<0.0001). A mean increase in hemoglobin level of at least 1 g/dL during weeks 1 to 24 was noted in 35% of patients who received REBLOZYL® and in 8% of patients who received placebo. The most common adverse events of any grade associated with REBLOZYL® included fatigue, diarrhea, asthenia, nausea and dizziness, and the incidence of adverse events decreased over time.
It was concluded that treatment with REBLOZYL® significantly reduced the severity of anemia in patients with Lower-risk MDS with ring sideroblasts, who had been RBC transfusion-dependent, and who had disease that was refractory to or unlikely to respond to ESAs. Luspatercept in Patients with Lower-Risk Myelodysplastic Syndromes. Fenaux P, Platzbecker U, Mufti GJ, et al. N Engl J Med 2020; 382:140-151