SUMMARY: Lung cancer is the second most common cancer in both men and women and accounts for about 13% of all new cancers and 27% of all cancer deaths. The American Cancer Society estimates that for 2017 about 222,500 new cases of lung cancer will be diagnosed and over 155,000 patients will die of the disease. Lung cancer is the leading cause of cancer-related mortality in the United States. Non Small Cell Lung Cancer (NSCLC) accounts for approximately 85% of all lung cancers. Of the three main subtypes of Non Small Cell Lung Cancer (NSCLC), 25% are Squamous Cell Carcinomas (SCC), 40% are Adenocarcinomas and 10% are Large cell carcinomas. With changes in the cigarette composition and decline in tobacco consumption over the past several decades, Adenocarcinoma now is the most frequent histologic subtype of lung cancer. Approximately 10% to 15% of Caucasian patients and 50% of Asian patients with Adenocarcinomas, harbor activating EGFR (Epidermal Growth Factor Receptor) mutations and 90% of these mutations are either Exon 19 deletions or L858R point mutations in Exon 21. EGFR Tyrosine Kinase Inhibitors (TKIs) such as TARCEVA® (Erlotinib), IRESSA® (Gefitinib) and GILOTRIF® (Afatinib), have demonstrated a 60% to 70% response rate as monotherapy when administered as first line treatment, in patients with metastatic NSCLC, who harbor the sensitizing EGFR mutations. 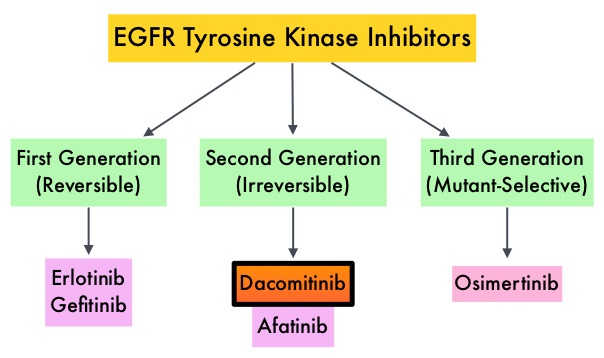 The median PFS for patients who received Dacomitinib was 14.7 months compared with 9.2 months for the group who received IRESSA® (HR=0.59; P<0.0001). This meant a 41% reduction in the risk of cancer progression or death with Dacomitinib compared with IRESSA®. The median Duration of Response was 14.8 months with Dacomitinib versus 8.3 months with IRESSA® (HR= 0.40; P<0.0001). As expected, patients in the Dacomitinib group experienced more side effects such as skin rash and diarrhea and this has been attributed to the stronger suppression of the EGFRs in the normal healthy tissues.