SUMMARY: Breast cancer is the most common cancer among women in the US and about 1 in 8 women (12%) will develop invasive breast cancer during their lifetime. Approximately 290,560 new cases of breast cancer will be diagnosed in 2022 and about 43,780 individuals will die of the disease, largely due to metastatic recurrence. 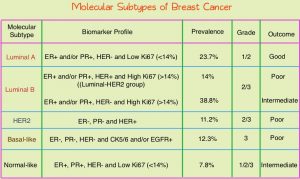 Conventional clinical pathological factors have limited ability to identify breast cancer patients with low risk disease, who could avoid radiation therapy. Molecular defined intrinsic subtypes of breast cancer can provide additional prognostic information. Breast cancer is heterogeneous malignancy and using global gene expression analyses, 5 breast cancer intrinsic subtypes have been established. They include Luminal A, Luminal B, HER2-enriched, Basal-like, and Normal breast-like group. Luminal A breast cancer patients have the lowest risk of recurrence. In a retrospective analysis of women over age 60 years, with Luminal A, Grade 1-2, T1N0 breast cancer, treated with breast conserving surgery and endocrine therapy alone, the local recurrence rate was low (JCO 2015; 33:2035). However, the utility of combining molecular subtype (Luminal A subtype) with clinical pathological factors, to guide radiotherapy decision-making, has not been prospectively evaluated.

LUMINA is a prospective multicenter single-arm, cohort study, in which 501 women, 55 years and older, who had undergone breast conserving surgery for breast cancer, were enrolled. Eligible patients had invasive ductal T1N0, Grade 1-2, Luminal A breast cancer, had undergone breast conserving surgery, with excision margins of at least 1 mm and sentinel lymph node biopsy, omitted radiotherapy, and had received adjuvant endocrine therapy for at least 5 years. Luminal A subtype was defined as ER 1% or more, PR more than 20%, HER2 negative and Ki67 13.25% or less. Ki67 immunohistochemistry was performed centrally in one of three Canadian laboratories using International Ki67 Working Group methods. The median patient age was 67 years, 66% had Grade 1 tumors, 88% of patients were less than 75 years, and the median tumor size was 1.1 cm. Patients were followed every six months for the first two years and then yearly. The Primary outcome was local recurrence defined as time from enrollment to any invasive or non-invasive cancer in the ipsilateral breast. Secondary endpoints included contralateral breast cancer, Relapse Free Survival (RFS) based on any recurrence, Disease Free Survival, and Overall Survival.

At a median follow up of 5 years, the local recurrence rate was 2.3% and the rate of contralateral breast cancer was 1.9%. The 5-year Relapse Free Survival, Disease Free Survival and Survival rate was 97.3%, 89.9% and 97.2% respectively.

The authors concluded that among women 55 years of age and over, with low grade Luminal A breast cancer, omission of radiation therapy following breast conserving surgery and treatment with endocrine therapy alone for 5 years or more, resulted in very low rates of local recurrence at 5 years. The researchers added that approximately 30,000-40,000 women per year in North America, predominantly in the US, could avoid the morbidity, expense, and inconvenience of radiotherapy.