SUMMARY: Breast cancer is the most common cancer among women in the US and about 1 in 8 women (12%) will develop invasive breast cancer during their lifetime. Approximately 284,200 new cases of breast cancer will be diagnosed in 2021 and about 44,130 individuals will die of the disease, largely due to metastatic recurrence.

DNA can be damaged due to errors during its replication or as a result of environmental exposure to ultraviolet radiation from the sun or other toxins. The tumor suppressor genes such as BRCA1 (Breast Cancer 1) and BRCA2 help repair damaged DNA and thus play an important role in maintaining cellular genetic integrity, failing which these genetic aberrations can result in malignancies. The BRCA1 gene is located on the long (q) arm of chromosome 17 whereas BRCA2 is located on the long arm of chromosome 13. Mutations in BRCA1 and BRCA2 account for about 20 to 25 percent of hereditary breast cancers and about 5 to 10 percent of all breast cancers. These mutations can be inherited from either of the parents and a child has a 50 percent chance of inheriting this mutation, and the deleterious effects of the mutations are seen even when an individual’s second copy of the gene is normal. Patients with BRCA mutations can present with aggressive, high-risk disease and are at a high risk of recurrence following completion of multimodality therapy including surgery, radiation, and chemotherapy. This is an area of unmet need, warranting identification of additional novel and effective therapies.

BRCA1 and BRCA2 are tumor suppressor genes and they recognize and repair double strand DNA breaks via Homologous Recombination (HR) pathway. Homologous Recombination is a DNA repair pathway utilized by cells to accurately repair DNA double-stranded breaks during the S and G2 phases of the cell cycle, and thereby maintain genomic integrity. The PARP (Poly ADP Ribose Polymerase) family of enzymes include PARP1 and PARP2, and is a related enzymatic pathway that repairs single strand breaks in DNA. In a BRCA mutant, the cancer cell relies solely on PARP pathway for DNA repair to survive.

LYNPARZA® is a PARP inhibitor, that traps PARP onto DNA at sites of single-strand breaks, thereby preventing their repair and generate double-strand breaks. These breaks cannot be repaired accurately in tumors harboring defects in Homologous Recombination Repair pathway genes, such as BRCA1 or BRCA2 mutations, and this leads to cumulative DNA damage and tumor cell death. LYNPARZA® is presently approved by the FDA for metastatic HER2-negative breast cancer with BRCA1/2 germline mutation. The researchers in this study evaluated the benefit of LYNPARZA® in patients with germline BRCA-mutated, HER2-negative, early stage breast cancer. 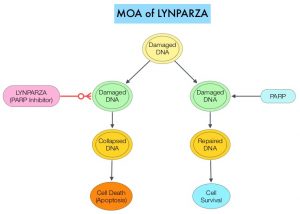 At the pre-specified interim analysis (2.5 years), the estimated 3-year invasive DFS (IDFS) was 85.9% for patients who received LYNPARZA® compared with 77.1% for those who received placebo (HR=0.58; P<0.001), representing a 42% reduction in the risk of IDFS with LYNPARZA® compared to placebo. The estimated 3-year distant DFS (DDFS) was 87.5% versus 80.4% respectively (HR=0.57; P<0.001). This represented a 43% reduction in DDFS with adjuvant LYNPARZA® compared to placebo. At the time of this interim analysis, Overall Survival data were considered immature. The side effects were consistent with the known safety profile of LYNPARZA®, and no new safety signals were noted during the trial.

The authors concluded that adjuvant LYNPARZA® following adjuvant or neoadjuvant chemotherapy significantly improved invasive DFS and distant DFS with acceptable toxicity, in patients with germline BRCA mutated, and high risk HER-2 negative early stage breast cancer. The authors added that this is the first study to report the benefit of a PARP inhibitor given as adjuvant therapy on survival endpoints, in this patient group. Overall Survival data are awaited, as follow up data matures.