SUMMARY: The American Cancer Society estimates that in 2017, about 72,240 people will be diagnosed with Non Hodgkin Lymphoma (NHL) in the United States and about 20,140 individuals will die of this disease. Indolent Non Hodgkin Lymphomas are mature B cell lymphoproliferative disorders and include Follicular Lymphoma, Nodal Marginal Zone Lymphoma (NMZL), Extranodal Marginal Zone Lymphoma (ENMZL) of Mucosa-Associated Lymphoid Tissue (MALT), Splenic Marginal Zone Lymphoma (SMZL), LymphoPlasmacytic Lymphoma (LPL) and Small Lymphocytic Lymphoma (SLL). Follicular Lymphoma is the most indolent form and second most common form of all NHLs and they are a heterogeneous group of lymphoproliferative malignancies. Approximately 20% of all NHLs are Follicular Lymphomas. Advanced stage indolent NHL is not curable and as such, prolonging Progression Free Survival (PFS) and Overall Survival (OS), while maintaining Quality of Life, have been the goals of treatment intervention. Asymptomatic patients with indolent NHL are generally considered candidates for “watch and wait” approach. Patients with advanced stage symptomatic Follicular Lymphoma are often treated with induction chemoimmunotherapy followed by maintenance RITUXAN® (Rituximab). This can result in a median Progression Free Survival (PFS) of 6-8 yrs and a median Overall Survival of 12-15 yrs. However, approximately 30% of the patients will relapse in 3 years. 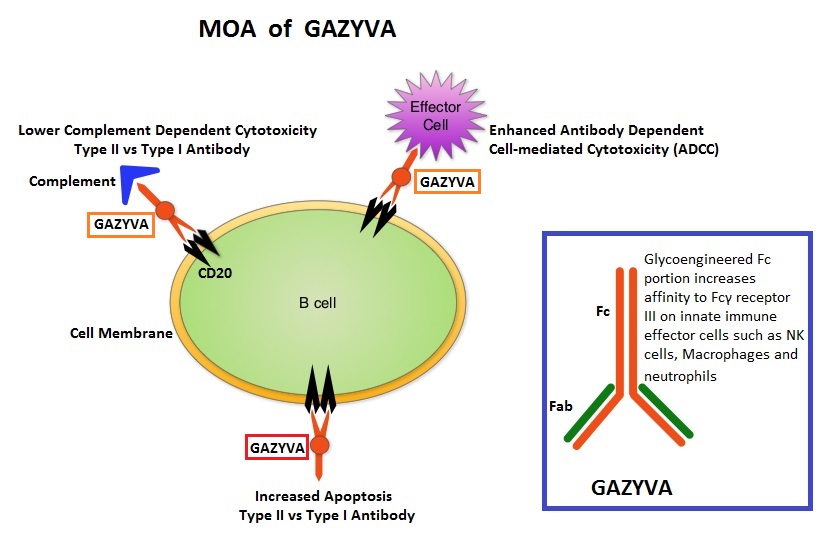 GAZYVA® along with Bendamustine in the phase III GADOLIN study prolonged PFS, compared with Bendamustine alone, in patients with relapsed/refractory indolent Non Hodgkin lymphoma. Based on this promising data, the GALLIUM phase III trial was conducted in treatment naïve patients with Follicular Lymphoma. This study included 1,202 patients with newly diagnosed Follicular Lymphoma, who had Grade I-IIIa tumors and had an ECOG PS of 2 or less. Patients were randomized to receive either GAZYVA® plus chemotherapy, followed by GAZYVA® maintenance (N=601), or RITUXAN® plus chemotherapy, followed by RITUXAN® maintenance (N=601). The chemotherapy regimens used were CHOP, CVP or Bendamustine, based on the discretion of the treating physician. Patients received either RITUXAN® 375mg/m2 IV on day 1 of each cycle or GAZYVA® 1000 mg IV on days 1, 8, and 15 of cycle 1 and day 1 of subsequent cycles, for either eight 21-day cycles (CHOP and CVP) or six 28-day cycles (Bendamustine). Patients who achieved a Complete Response (CR) or Partial Response (PR) at the end of induction therapy, received maintenance therapy with RITUXAN® or GAZYVA® every 2 months for 2 years or until disease progression. The median age was 59 years and 57.1% of patients received Bendamustine, 33.1% received CHOP, and 9.8% received CVP. The primary endpoint was Progression Free Survival (PFS) and secondary endpoints included Response Rate, Overall Survival (OS), Disease Free Survival and safety. After a median follow up of 34.5 months, upon recommendations from the Independent Monitoring Committee, the study was unblinded after a preplanned interim efficacy analysis.

The authors concluded that for treatment naïve Follicular Lymphoma patients, combining GAZYVA® with chemotherapy resulted in a clinically meaningful improvement in PFS compared with RITUXAN® plus chemotherapy. Whether the improved Progression Free Survival in the GAZYVA® group is related to the maintenance treatment, remains to be explored. Obinutuzumab for the First-Line Treatment of Follicular Lymphoma. Marcus R, Davies A, Ando K, et al. N Engl J Med 2017; 377:1331-1344