SUMMARY: The FDA on May 29, 2020, approved TECENTRIQ® (Atezolizumab) in combination with AVASTIN® (Bevacizumab) for patients with unresectable or metastatic HepatoCellular Carcinoma (HCC), who have not received prior systemic therapy. The American Cancer Society estimates that for 2020, about 42,810 new cases of primary liver cancer will be diagnosed in the US and 30,160 patients will die of their disease. Liver cancer is seen more often in men than in women and the incidence has more than tripled since 1980. This increase has been attributed to the higher rate of Hepatitis C Virus (HCV) infection among baby boomers (born between 1945 through 1965). Obesity and Type II diabetes have also likely contributed to the increasing trend. Other risk factors include alcohol, which increases liver cancer risk by about 10% per drink per day, and tobacco use, which increases liver cancer risk by approximately 50%. HepatoCellular Carcinoma (HCC) is the second most common cause of cancer-related deaths worldwide, and majority of patients typically present at an advanced stage. The prognosis for unresectable HCC remains poor and one year survival rate is less than 50% following diagnosis. NEXAVAR® was approved by the FDA in 2007 for the first line treatment of unresectable HepatoCellular Carcinoma (HCC) and the median Overall Survival was 10.7 months in the NEXAVAR® group and 7.9 months in the placebo group. 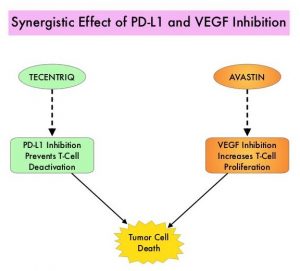 TECENTRIQ® (Atezolizumab) is an anti PD-L1 monoclonal antibody, designed to directly bind to PD-L1 expressed on tumor cells and tumor-infiltrating immune cells, thereby blocking its interactions with PD-1 and B7.1 receptors. PD-L1 inhibition may prevent T-cell deactivation and further enable the activation of T cells. AVASTIN® (Bevacizumab) is a recombinant humanized monoclonal IgG1 antibody that binds VEGF (Vascular Endothelial Growth Factor) and prevents the interaction of VEGF to its receptors (Flt-1 and KDR) on the surface of endothelial cells, thereby preventing endothelial cell proliferation and new blood vessel formation. AVASTIN® in addition to its established anti-angiogenic properties can further enhance TECENTRIQ®’s ability to restore anti-cancer immunity, by inhibiting VEGF-related immunosuppression, promoting T-cell tumor infiltration and enabling priming and activation of T-cell responses against tumor antigens. The use of TECENTRIQ® in combination with AVASTIN® therefore has a strong scientific rationale, as this combination can potentially enhance the immune system to combat a broad range of malignancies.

IMbrave150 is a global, open-label, multicenter, randomized, Phase III study in which a combination of TECENTRIQ® and AVASTIN® was compared with standard-of-care NEXAVAR®, in patients with previously untreated locally advanced or metastatic HCC. Patients were randomized 2:1 to receive TECENTRIQ® 1200 mg IV on day 1 along with AVASTIN® 15 mg/kg on day 1 of each 21-day cycle (N=336) or NEXAVAR® 400 mg orally twice daily, each day of the 21-day cycle (N=165). Treatment was continued until disease progression or unacceptable toxicity. The treatment groups were well balanced and enrolled patients had an ECOG performance status of 0 or 1, Child-Pugh Class A disease, and adequate hematologic and end-organ function. The two co-Primary endpoints were Overall Survival (OS) and Progression Free Survival (PFS). The key Secondary endpoints included Overall Response Rate (ORR), Time To Progression (TTP) and Duration of Response (DOR), as well as Patient-Reported Outcomes (PROs), Safety and Pharmacokinetics.

With a median follow up of 8.6 months, the OS was not yet reached in the TECENTRIQ® and AVASTIN® combination group compared with 13.2 months in the NEXAVAR® group (HR=0.58; P=0.0006). The median PFS was 6.8 months versus 4.3 months respectively (HR=0.59; P<0.0001). The ORR was 27% versus 12% (P<0.0001) based on the Independent Review Facility RECIST 1.1 criteria, in favor of the combination regimen. This benefit was seen across clinical subgroups and the combination regimen delayed deterioration of Quality of Life, compared with NEXAVAR®. Grade 3 and 4 Adverse Events were similar and occurred in 57% and 55% of the combination and control arms, respectively.

It was concluded that a combination of TECENTRIQ® and AVASTIN® demonstrated statistically significant and clinically meaningful improvement in both Overall Survival and Progression Free Survival, compared with NEXAVAR®, in treatment naïve patients with unresectable Hepatocelluar Carcinoma. The authors added that this is the first study in 11 years to show an improvement in Overall Survival with a new first line treatment option, compared to NEXAVAR®, and has the potential to be a practice changing treatment in Hepatocellular Carcinoma.