SUMMARY: The FDA on January 14, 2019 approved CABOMETYX® (Cabozantinib) for patients with HepatoCellular Carcinoma (HCC) who have been previously treated with NEXAVAR® (Sorafenib). The American Cancer Society estimates that for 2019, about 42,030 new cases of primary liver cancer will be diagnosed in the US and 31,780 patients will die of their disease. Liver cancer is seen more often in men than in women and the incidence has more than tripled since 1980. This increase has been attributed to the higher rate of Hepatitis C virus (HCV) infection among baby boomers (born between 1945 through 1965). Obesity and type II diabetes have also likely contributed to the trend. Other risk factors include alcohol, which increases liver cancer risk by about 10% per drink per day, and tobacco use, which increases liver cancer risk by approximately 50%. HepatoCellular Carcinoma (HCC) is the second most common cause of cancer-related deaths worldwide. NEXAVAR® was approved by the FDA in 2007 for the treatment of unresectable HepatoCellular Carcinoma (HCC). Patients with advanced HCC, who progress on NEXAVAR®, have a poor prognosis, with limited treatment options. 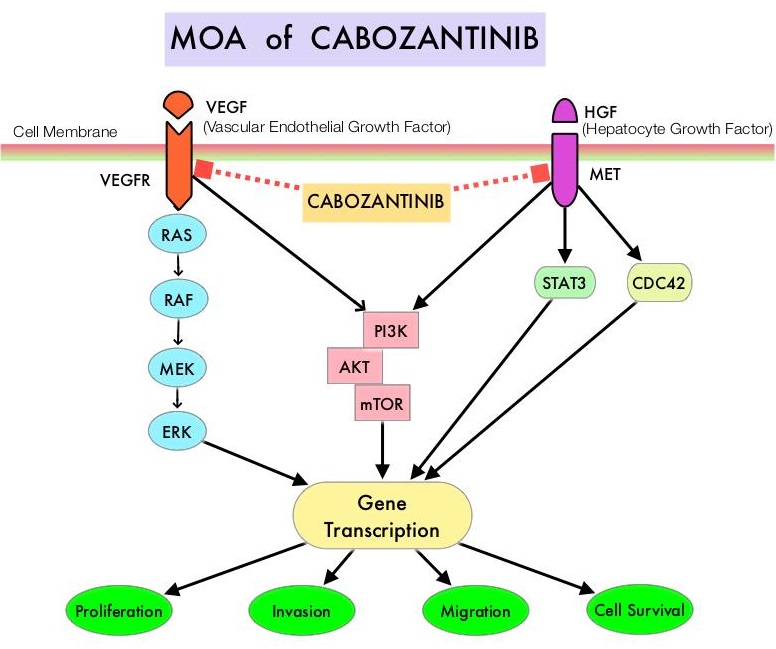 The present FDA approval was based on the CELESTIAL trial, which is a global, randomized, double-blind, phase III study, which evaluated the benefit of CABOMETYX® in patients with advanced HCC, whose disease progressed on prior treatment with NEXAVAR® or other systemic therapies. NEXAVAR® is considered the standard first line treatment for patients with advanced HCC. In this study, 707 patients were randomized in a 2:1 ratio to receive CABOMETYX® 60 mg daily (N= 470) or placebo (N=237). Eligible patients had an ECOG performance status of 0 or 1, a Child-Pugh score of A, and had progressed on at least one prior systemic therapy for advanced HCC, with 70% having received only prior treatment with NEXAVAR® and 27% having received two prior systemic therapy regimens for advanced HCC. The median age was 64 years, 38% had Hepatitis B Virus, 24% had Hepatitis C Virus, 78% had ExtraHepatic Spread (EHS), 30% had MacroVascular Invasion (MVI) and 85% had both EHS and MVI. Both treatment groups were well balanced and patients were stratified based on etiology of disease, geographic region, and the presence of EHS and/or MVI. The Primary endpoint was Overall Survival (OS) and Secondary endpoints included Progression Free Survival (PFS) and Objective Response Rate (ORR).