SUMMARY: The FDA on December 20, 2019, granted accelerated approval to ENHERTU® (Trastuzumab deruxtecan) for patients with unresectable or metastatic HER2-positive breast cancer, who have received two or more prior anti-HER2-based regimens in the metastatic setting. Breast cancer is the most common cancer among women in the US and about 1 in 8 women (12%) will develop invasive breast cancer during their lifetime. Approximately 268,600 new cases of invasive breast cancer will be diagnosed in 2019 and about 41,760 women will die of the disease. The HER or erbB family of receptors consist of HER1, HER2, HER3 and HER4. Approximately 15-20% of invasive breast cancers overexpress HER2/neu oncogene, which is a negative predictor of outcomes without systemic therapy. Patients with HER2-positive metastatic breast cancer are often treated with anti-HER2 targeted therapy along with chemotherapy, irrespective of hormone receptor status, and this has resulted in significantly improved treatment outcomes. HER2-targeted therapies include HERCEPTIN® (Trastuzumab), TYKERB® (Lapatinib), PERJETA® (Pertuzumab) and KADCYLA® (ado-Trastuzumab emtansine). Dual HER2 blockade with HERCEPTIN® and PERJETA®, given along with chemotherapy (with or without endocrine therapy), as first line treatment, in HER2 positive metastatic breast cancer patients, was shown to significantly improve Progression Free Survival (PFS) as well as Overall Survival (OS). The superior benefit with dual HER2 blockade has been attributed to differing mechanisms of action and synergistic interaction between HER2 targeted therapies. Patients progressing on Dual HER2 blockade often receive KADCYLA® which results in an Objective Response Rate (ORR) of 44% and a median PFS of 9.6 months, when administered after HERCEPTIN® and a taxane. There is however no standard treatment option for this patient population following progression on KADCYLA®. 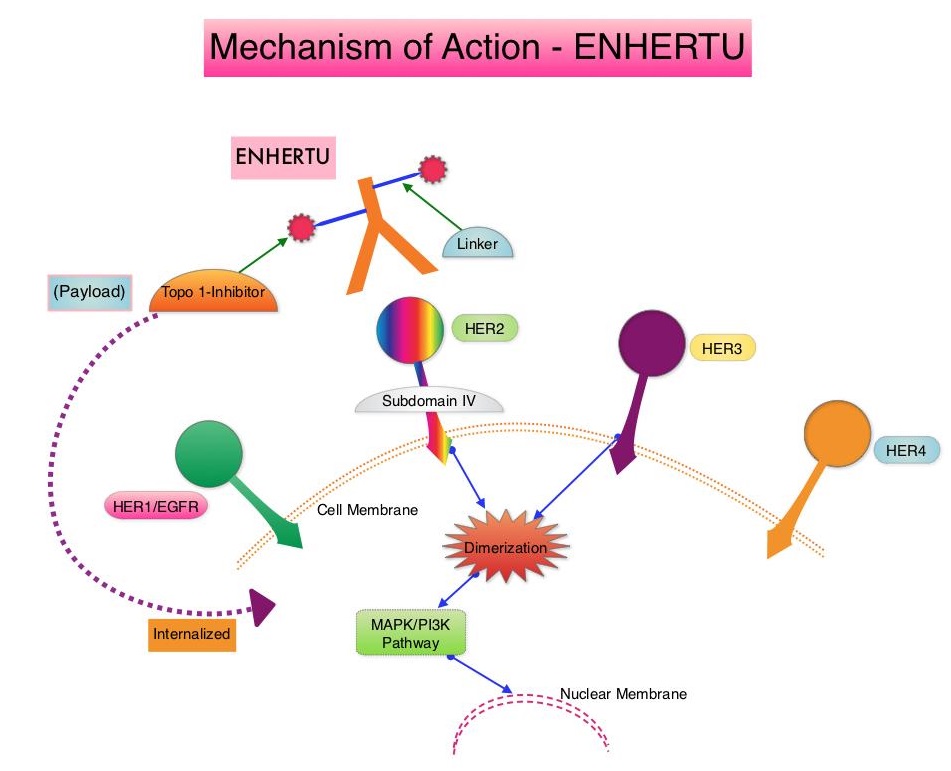 ENHERTU® is an Antibody-Drug Conjugate (ADC) composed of a humanized monoclonal antibody specifically targeting HER2, with the amino acid sequence similar to Trastuzumab, a cleavable tetrapeptide-based linker, and a potent cytotoxic Topoisomerase I inhibitor as the cytotoxic drug (payload). ENHERTU® has a favorable pharmacokinetic profile and the tetrapeptide-based linker is stable in the plasma and is selectively cleaved by cathepsins that are up-regulated in tumor cells. Unlike KADCYLA®, ENHERTU® has a higher drug-to-antibody ratio (8 versus 4), released payload easily crosses the cell membrane with resulting potent cytotoxic effect on neighboring tumor cells regardless of target expression, and the released cytotoxic agent (payload) has a short half-life, minimizing systemic exposure. In a Phase 1 dose-finding study involving patients with advanced HER2-positive breast cancer, treatment with ENHERTU® resulted in a confirmed response rate was 59.5%, and the median response duration was 20.7 months. However, the efficacy of ENHERTU® in patients with HER2-positive metastatic breast cancer, previously treated with KADCYLA® remained unclear.

The present FDA approval was based on DESTINY-Breast01 study, which is a multicenter, single-arm, Phase II trial, in which 184 patients with HER2-positive, metastatic breast cancer, who had received two or more prior HER2 targeted therapies including KADCYLA®, were enrolled. Patients received ENHERTU® 5.4 mg/kg IV every 3 weeks until disease progression or unacceptable toxicity. The median age was 55 years, 53% had Hormone Receptor-positive tumors and the median number of previous lines of therapy for metastatic disease was six and included KADCYLA® (100%), Trastuzumab (100%), Pertuzumab (66%), and other anti-HER2 therapies (54%). The Primary end point was Objective Response Rate (ORR) assessed by Independent Central Review and Secondary endpoints included Duration of Response, Progression Free Survival (PFS) and Overall Survival (OS). The median follow up was 11.1 months. The ORR was 60.9%, with 6% Complete Responses and 54.9% Partial Responses. The median time to response was 1.6 months and the median response duration was 14.8 months. The median PFS was 16.4 months the median OS was not reached at the time of this publication. The most Grade 3 or higher adverse events were cytopenias, nausea, diarrhea and Interstitial Lung Disease.