SUMMARY: Breast cancer is the most common cancer among women in the US and about 1 in 8 women (12%) will develop invasive breast cancer during their lifetime. Approximately 266,120 new cases of invasive breast cancer will be diagnosed in 2018 and about 40,920 women will die of the disease. Axillary lymph node evaluation is an important part of breast cancer staging and the presence of axillary lymph metastases decreases the 5-year survival rate by 28-40%. Axillary lymph node status remains the most powerful predictor of breast cancer recurrence and survival. Axillary Lymph Node Dissection (ALND) was first advocated in the 18th century as part of the treatment of invasive breast cancer and has been standard practice until 2 decades back. ALND can be associated with significant morbidities such as upper limb lymphedema, pain, and sensitivity disorders and this can have a major psychological impact on breast cancer patients. Sentinel Lymph Node Biopsy (SLNB) which was introduced into clinical practice in the mid 1990’s, however has now become the standard for Stage I and II breast cancer. The sentinel node is the first lymph node(s) to which cancer cells are most likely to metastasize from a primary tumor. With the introduction of intraoperative lymphatic mapping in the 1990s, Sentinel Lymph Node Biopsy (SLNB) has now gained general acceptance and if the sentinel node is negative for metastatic disease or only has minimal disease, then no further axillary surgery is indicated. Unlike Axillary Lymph Node Dissection (ALND), SLNB is associated with a lower incidence of lymphedema/ seroma at the surgery site, paresthesias and restriction of joint movement. Nine randomized clinical trials have not shown any difference in mortality among patients who underwent ALND or SLNB for either lymph node metastases or negative sentinel lymph nodes, validating Sentinel Lymph Node Biopsy (SLNB). The American Society of Clinical Oncology (ASCO) first published guidelines on the use of SLNB for patients with early stage breast cancer in 2005, based on one randomized clinical trial. Since then, ASCO updated Clinical Practice Guideline based on additional information from 9 randomized clinical trials and13 cohort studies pertinent to SLNB and ALND. 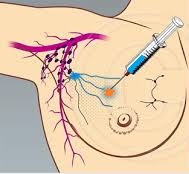 Patients with T1-2 tumors with positive Sentinel Lymph Node Biopsy usually undergo complete ALND and there is increasing controversy about whether ALND is always necessary. AMAROS is a multicenter, randomized phase III trial, sponsored by the European Organisation for Research and Treatment of Cancer (EORTC), in which the effectiveness of complete Axillary Lymph Node Dissection (ALND) was compared with axillary Radiation Therapy (RT), in patients with invasive breast cancer. The rationale was that Radiation Therapy uses high-energy x-rays to damage tumor cells and may be a less invasive treatment and causes fewer side effects than complete ALND. This study was conducted to evaluate whether axillary RT could yield comparable outcomes to ALND with fewer adverse side effects, in this patient population. This trial enrolled 4806 patients with early-stage, clinically node-negative breast cancer of whom 1425 patients had a positive sentinel lymph node biopsy. Of these patients, 744 were randomly assigned to undergo complete ALND, whereas 681 patients received axillary RT. Both treatment groups were well balanced. The first 5-year follow up data published in 2013 showed that upper extremity lymphedema occurred significantly less often in those who received Radiotherapy compared with those who underwent complete ALND, and recent Quality of life and morbidity data supported these earlier findings.

It was concluded that axillary Radiotherapy is noninferior to complete Axillary Lymph Node Dissection in terms of locoregional control and this trial suggests that some patients with a positive sentinel lymph node biopsy may be appropriate candidates for axillary Radiotherapy. Rutgers, E. Radiotherapy or surgery of the axilla after a positive sentinel node in breast cancer patients: 10-year results of the EORTC AMAROS trial. Presented at the 2018 San Antonio Breast Cancer Symposium; December 4-8; San Antonio, Texas.(Abstract GS4-01)