SUMMARY: ColoRectal Cancer (CRC) is the third most common cancer diagnosed in both men and women in the United States. The American Cancer Society estimates that approximately 135,430 new cases of ColoRectal Cancer will be diagnosed in the United States in 2017 and over 50,260 patients are expected to die of the disease. The lifetime risk of developing ColoRectal Cancer (CRC) is about 1 in 20 (5%). The Mitogen-Activated Protein Kinase pathway (MAPK pathway) is an important signaling pathway which enables the cell to respond to external stimuli. This pathway plays a dual role, regulating cytokine production and participating in cytokine dependent signaling cascade. The MAPK pathway of interest is the RAS-RAF-MEK-ERK pathway. The RAF family of kinases includes ARAF, BRAF and CRAF signaling molecules. BRAF is a very important intermediary of the RAS-RAF-MEK-ERK pathway. The BRAF V600 mutations results in constitutive activation of the MAP kinase pathway. Inhibiting BRAF can transiently reduce MAP kinase signaling. However, this can result in feedback upregulation of EGFR signaling pathway, which can then reactivate the MAP kinase pathway. This aberrant signaling can be blocked by dual inhibition of both BRAF and EGFR. 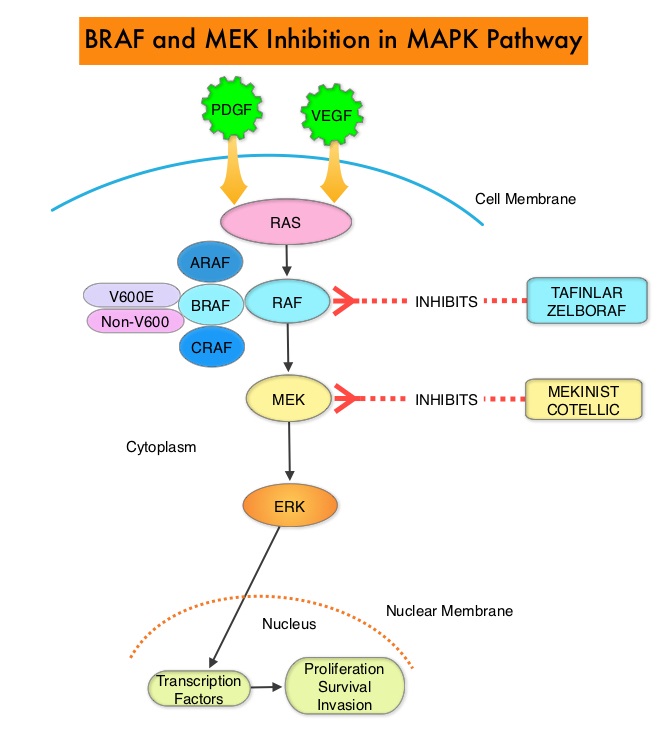 Approximately 10% of CRCs detected by NGS harbor BRAF V600E mutation and the detection of BRAF V600E mutation is recognized as a marker of poor prognosis in patients with metastatic CRC. RAS and BRAF V600E mutations occur in a mutually exclusive fashion. Patients with this molecular subtype of CRC are older than age 60 years, more frequently female, have a right-sided tumor with high-grade histology, and often have MicroSatellite Instability (MSI-H). These patients often have peritoneal metastasis and despite chemotherapeutic intervention have a shortened overall survival. These tumors have limited response to EGFR targeted therapy and current guidelines recommend against the use of anti-EGFR antibodies in BRAF V600E-mutated mCRC.

This study concluded that Non-V600 BRAF mutations in metastatic ColoRectal Cancer (CRC), which accounted for 22% of all BRAF mutations identified by NGS, is a clinically distinct subtype of CRC, with an excellent prognosis and aggressive chemotherapeutic intervention could be avoided for this group of patients. Non-V600 BRAF Mutations Define a Clinically Distinct Molecular Subtype of Metastatic Colorectal Cancer. Jones JC, Renfro LA, Al-Shamsi HO, et al. J Clin Oncol 2017;35: 2624-2630