SUMMARY: The FDA on April 12, 2019 granted accelerated approval to BALVERSA® (Erdafitinib) for patients with locally advanced or metastatic Urothelial Carcinoma, with susceptible FGFR3 or FGFR2 genetic alterations,that has progressed during or following platinum-containing chemotherapy, including within 12 months of neoadjuvant or adjuvant platinum-containing chemotherapy. Patients should be selected for therapy based on an FDA-approved companion diagnostic for BALVERSA®. The FDA also simultaneously approved the THERASCREEN® FGFR RGQ RT-PCR Kit, developed by QIAGEN, for use as a companion diagnostic for this therapeutic indication. 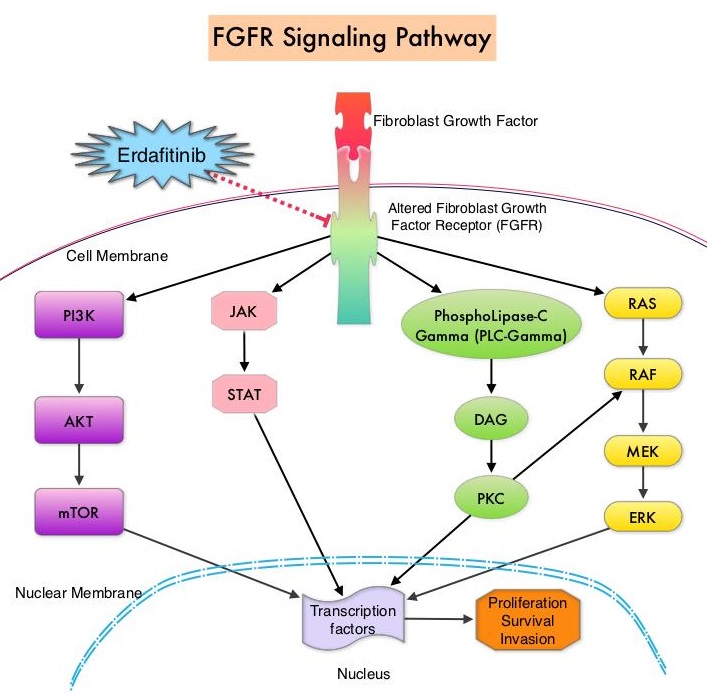 FGFRs are a family of Receptor Tyrosine Kinases, which may be upregulated in a variety of malignancies. The Fibroblast Growth Factor/Fibroblast Growth Factor Receptor (FGF/FGFR) signaling pathway regulates embryogenesis, adult tissue homeostasis, angiogenesis and wound repair, and is also pivotal in cell functions, including proliferation, differentiation, apoptosis and migration. Deregulated FGF/FGFR activations have been associated with developmental disorders and cancer progression. Following binding with a ligand, FGFRs activate downstream signaling pathways such as the Mitogen Activated Protein Kinase (MAPK), Signal Transducer and Activator of Transcription (STAT), the PhosphoInositide-3-Kinase (PI3K)/Akt pathways, and PLC-DAG-PKC pathway. FGFR isoforms have been shown to result in oncogenic FGFR signaling, which in turn promotes tumorigenesis. FGFR3 mutations have been described in approximately 75% of low-grade papillary bladder cancers, and FGFR3 overexpression has been noted in 42% of muscle-invasive bladder cancers. FGFR1 amplification has also been found in 3% of urinary bladder cancers. Patients with FGFR alterations have poor outcomes when treated with available therapies and these alterations occur in 20% of patients with metastatic Urothelial Carcinoma.

BALVERSA® (Erdafitinib) is a once-daily, oral, pan-Fibroblast Growth Factor Receptor (FGFR) Tyrosine Kinase Inhibitor. The approval of BALVERSA® was based on data from a cohort of 87 patients, enrolled in Study BLC2001, which is a multicenter, open-label, single-arm trial. Enrolled patients had locally advanced or metastatic Urothelial Carcinoma that had progressed during, or following at least one prior chemotherapy regimen, and had FGFR genomic alterations such as FGFR3 gene mutations or FGFR2 or FGFR3 gene fusions. Ten percent of patients were chemo naïve, 47% percent of patients had received two or more prior lines of therapy and 80% of patients had visceral metastases. Approximately 97% patients had prior Platinum based therapy and 24% of patients had received anti–PD-1/PD-L1 treatment. The median patient age was 67 years. Patients received BALVERSA® at a starting dose of 8 mg PO once daily. Patients whose serum phosphate levels were below the target of 5.5 mg/dL between days 14 and 17 (41% of the patients) had their dose increased to 9 mg once daily. Treatment was continued until disease progression or unacceptable toxicity. The Primary end point was Objective Response Rate (ORR).

The ORR was 32.2%, with Complete Responses in 2.3% and Partial Responses in 29.9%. Median response duration was 5.4 months. Responding patients included those patients who had previously not responded to anti PD-L1 or PD-1 treatment. The most common adverse reactions were increased serum phosphate, stomatitis, fatigue, increased serum creatinine, diarrhea, onycholysis, increased liver function studies and hyponatremia.