SUMMARY: The Centers for Disease Control and Prevention estimates that in the US, there are more than 16,000 cases of Human PapillomaVirus (HPV)-positive OroPharyngeal Squamous Cell Carcinoma (OPSCC) per year and there has been a signiﬁcant increase in incidence during the past several decades, due to changes in sexual practices. They represent approximately 70% of all OPSCC in the United States and Canada. HPV-positive oropharyngeal squamous cell carcinoma is an entirely distinct disease entity from HPV-negative oropharyngeal squamous cell carcinoma. Patients with HPV-positive OPSCC tend to be younger males, who are former smokers or nonsmokers, with risk factors for exposure to High Risk HPV (HR-HPV). The HPV-positive primary Squamous Cell Carcinoma tend to be smaller in size, with early nodal metastases, and these patients have a better prognosis compared with patients with HPV-negative Head and Neck Squamous Cell Carcinoma (HNSCC), when treated similarly. Expression of tumor suppressor protein, known as p16, is highly correlated with infection with HPV in HNSCC. Accurate HPV assessment in head and neck cancers is becoming important as it significantly impacts clinical management. HPV status is considered the most important prognostic indicator in patients with head and neck cancer and p16 status is now included in the American Joint Committee on Cancer (AJCC) Staging System. 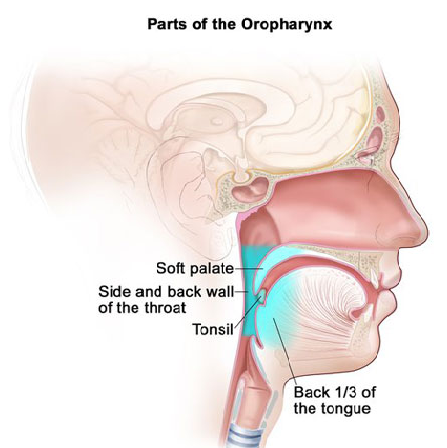 HPV-positive Oropharyngeal Squamous Cell Carcinoma is more sensitive to chemotherapy and radiotherapy than is HPV-negative Oropharyngeal Squamous Cell Carcinoma, which translates to a much better prognosis and survival, when treated with a combination of Cisplatin chemotherapy and radiotherapy. This treatment however can be associated with substantial morbidity and lifelong toxicities such as dry mouth, difficulty swallowing, and loss of taste. Patients deemed unable to tolerate Cisplatin chemotherapy such as the elderly, and those with poor kidney function, receive ERBITUX® (Cetuximab), an Epidermal Growth Factor Receptor (EGFR) inhibitor with radiotherapy.

ERBITUX® is an EGFR targeted monoclonal antibody and the goal of this present study was to find an alternative to Cisplatin, and this study was designed to see if ERBITUX® with radiation would be less toxic than Cisplatin with radiation, without compromising survival among HPV-positive OPSCC patient population. RTOG 1016 is a randomized, multicentre, non-inferiority, phase III trial which included patients with Human PapillomaVirus (HPV)-positive Oropharyngeal Squamous Cell Carcinoma. This study enrolled 987 patients (N=987) at 182 centers in the US and Canada and enrollees had histologically confirmed HPV-positive Oropharyngeal carcinoma and clinical categories included T1-T2, N2a-N3 M0 or T3-T4, N0-N3 M0 groups. Patients were randomly assigned in a 1:1 ratio to receive either radiotherapy plus ERBITUX®, or radiotherapy plus Cisplatin. Treatment groups were well balanced and were stratified by T (T1–T2 vs T3–T4), N category (N0-N2a vs N2b-N3), and smoking history (10 pack-years or less vs more than 10 pack-years). Patients were randomized to receive either ERBITUX® at a loading dose of 400 mg/m2 IV 5-7 days before radiotherapy initiation, followed by ERBITUX® 250 mg/m2 IV weekly for seven doses (N=425) or Cisplatin 100 mg/m 2 on days 1 and 22 of radiotherapy (N=424). All patients received accelerated Intensity-Modulated RadioTherapy (IMRT) delivered at 70 Gy in 35 fractions over 6 weeks at six fractions per week (with two fractions given on one day, at least 6 hours apart). The Primary endpoint was Overall Survival.