SUMMARY: Immune Thrombocytopenic Purpura (ITP), also referred to as Idiopathic Thrombocytopenic Purpura, is an autoimmune disorder characterized by a low platelet count and an increased risk of bleeding. The diagnosis of ITP is established based on a platelet count of less than 100×109/L and exclusion of other causes of thrombocytopenia. Infection with the Hepatitis C Virus should be considered in all patients with acute ITP. The autoantibodies identified in patients with ITP are often directed against platelet glycoprotein IIb/IIIa, although antibodies directed against glycoprotein Ib/IX have also been detected. The glycoprotein complex IIb/IIIa plays an important role in platelet adhesion by binding fibrinogen, fibronectin, vitronectin, and von Willebrand factor. Glycoprotein Ib/IX is the main receptor for von Willebrand factor. Platelet autoantibodies destroy platelets resulting in persistent thrombocytopenia. Platelet autoantibodies have also been implicated in impaired platelet production by megakaryocytes. 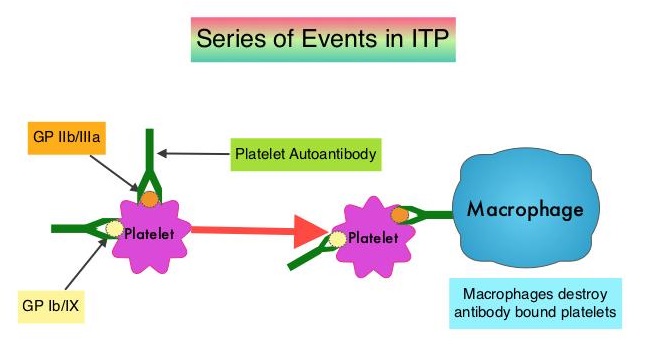 There are presently no reliable diagnostic tests or standard biomarkers to diagnose ITP. A response to immunosuppressive therapy remains the most useful diagnostic and therapeutic strategy in patients suspected with ITP. The utility of platelet autoantibody tests in ITP remains unclear, as the sensitivity and specificity of these tests is variable.

This study was conducted to understand the role of platelet autoantibody testing in patients with suspected ITP. Investigators extracted data from three online databases, Ovid Medline, PubMed, and Web of Science and conducted a systematic review and meta-analysis of 18 studies that included a total of 1170 patients with ITP and 225 controls without ITP. The analysis included studies that tested at least 20 or more ITP patients, for autoantibodies against the major platelet antigens GPIIb/IIIa or GPIb/IX, either directly on the platelet surface or indirectly in serum or plasma.