What is (CAR) T-cell immunotherapy? Chimeric Antigen Receptor (CAR) T-cell therapy is a type of immunotherapy and consists of T cells collected from the patient’s blood in a leukapheresis procedure, and genetically engineered to produce special receptors on their surface called Chimeric Antigen Receptors (CAR). These reprogrammed cytotoxic T cells with the Chimeric Antigen Receptors on their surface are now able to recognize a specific antigen on tumor cells. These genetically engineered and reprogrammed CAR T-cells are grown in the lab and are then infused into the patient. These cells in turn proliferate in the patient’s body and the engineered receptor on the cell surface help recognize and kill cancer cells that expresses that specific antigen. It is a therefore a customized treatment created using patient’s own T cells to destroy cancer cells. 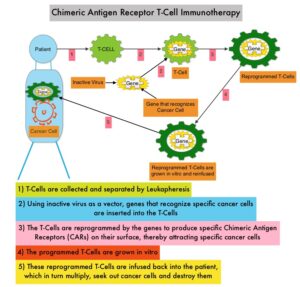 YESCARTA® is a Chimeric Antigen Receptor (CAR) T cell immunotherapy and consists of autologous T cells that are genetically modified to produce a CAR protein, allowing the T cells to seek out and destroy cancer cells expressing the antigen CD19, which is found uniquely on B cells. Patients, following treatment with CAR T-cells, develop B-cell aplasia (absence of CD19 positive cells) due to B-cell destruction and may need immunoglobin replacement. Hence, B-cell aplasia can be a useful therapeutic marker, as continued B-cell aplasia has been seen in all patients who had sustained remission, following CAR T-cell therapy. Cytokine Release Syndrome (CRS), an inflammatory process is the most common and serious side effect of CAR T-cell therapy and is associated with marked elevation of Interleukin-6. Cytokine release is important for T-cell activation and can result in high fevers and myalgias. This is usually self limiting although if severe can be associated with hypotension and respiratory insufficiency. Tocilizumab (ACTEMRA®), an Interleukin-6 receptor blocking antibody produces a rapid improvement in symptoms. This is however not recommended unless the symptoms are severe and life threatening, as blunting the cytokine response can in turn negate T-cell proliferation. Elevated serum Ferritin and C-reactive protein levels are surrogate markers for severe Cytokine Release Syndrome. The CAR T-cells have been shown to also access sanctuary sites such as the central nervous system and eradicate cancer cells. CD19 antigen is expressed by majority of the B cell malignancies and therefore most studies using CAR T-cell therapy have focused on the treatment of advanced B-cell malignancies such as Chronic Lymphocytic Leukemia (CLL), Acute Lymphoblastic Leukemia (ALL) and Non Hodgkin lymphoma (NHL), such as Diffuse Large B-Cell Lymphoma (DLBCL).

Diffuse Large B-Cell Lymphoma (DLBCL) is the most common of the aggressive Non-Hodgkin lymphoma’s in the United States, and the incidence has steadily increased 3 to 4% each year. Outcomes for patients with relapsed/refractory disease, is poor, with an Objective response Rate (ORR) of 26%, Complete Response (CR) rate of 8% and a median Overall Survival (OS) of 6.6 months. There is therefore a significant unmet need in this patient group.

The present FDA approval was based on ZUMA-7, an international, randomized, open-label, multicenter Phase III trial, which compared the safety and efficacy of YESCARTA® with that of the current Standard of Care, as second-line treatment in patients with relapsed or refractory Large B-Cell Lymphoma (LBCL). In this study, 359 enrolled patients were randomized 1:1 to receive either a single infusion of YESCARTA® following Fludarabine and Cyclophosphamide lymphodepleting chemotherapy (N=180) or Standard of Care investigator-chosen second-line therapy, consisting of 2 or 3 cycles of chemoimmunotherapy followed by high-dose therapy and autologous Hematopoietic Stem Cell Transplantation (HSCT), in patients who attained Complete Remission or Partial Remission (N=179). Patients randomized to YESCARTA® underwent leukapheresis, and then, lymphodepleting chemotherapy with Fludarabine 30 mg/m2/day and Cyclophosphamide 500 mg/m2/day for 3 days, followed by a single infusion of YESCARTA® at 2 × 106 CAR T cells/kg. Corticosteroid bridging therapy was allowed for patients with high disease burden at screening. Lack of response to chemotherapy was the most common reason for not receiving autologous HSCT, and 35% received on-protocol HSCT. Both treatment groups were well balanced. The median patient age was 59 years, 30% of patients were aged 65 years or older, 79% of patients had Stage III/IV disease, 74% of patients were primary refractory to their frontline therapy, 16% had high-grade B-cell lymphoma (double/triple-hit), and 44% of patients had elevated LDH levels. Key stratification factors included response to frontline therapy and second-line Age-Adjusted International Prognostic Index (sAAIPI) stage. The Primary endpoint was Event Free Survival (EFS), defined as time from randomization to disease progression, start of new lymphoma therapy, or death, and was determined by an Independent Review Committee (IRC). Secondary endpoints included Objective Response Rates (ORR), Overall Survival (OS), Progression Free Survival (PFS), Duration of Response, Safety, and Patient Reported Outcomes (PRO).

At a median follow-up of 24.9 months, the EFS was significantly longer in the YESCARTA® group and the estimated median EFS was 8.3 months in the YESCARTA® group compared with 2.0 months for those receiving Standard of Care chemotherapy (HR=0.40; P<0.0001). The estimated 18-month EFS rate was 41.5% in the YESCARTA® group and 17.0% in the standard therapy group. The IRC-assessed best ORR was statistically significantly higher in the YESCARTA® arm compared to the standard therapy arm (83% versus 50% respectively) and Complete Response rate was 65% versus 32% respectively. EFS was superior with YESCARTA® over Standard of Care across all key patient subgroups, including age, response to first-line therapy at randomization, second-line Age-Adjusted International Prognostic Index (sAAIPI) stage, and prognostic markers.

The authors concluded that ZUMA-7 met its primary EFS end point, demonstrating statistically significant and clinically meaningful improvement in efficacy with YESCARTA® compared to second-line Standard of Care in relapsed/ refractory Large B-Cell Lymphoma, with a 4-fold greater median EFS, a 33% higher Objective Response Rate, a doubling of the Complete Response rate, Event Free Survival improvements across key subgroups, and should therefore be a new standard for patients with second-line relapsed/refractory Large B-Cell Lymphoma. The NCCN updated its clinical practice guidelines to include YESCARTA® as a Category 1 recommendation for patients with early relapsed or primary-refractory Diffuse Large B-Cell Lymphoma.