SUMMARY: The FDA on May 1, 2020 approved DARZALEX® (Daratumumab) and Hyaluronidase-fihj (DARZALEX FASPRO®), for adult patients with newly diagnosed or Relapsed/Refractory multiple myeloma. This new product allows for subcutaneous dosing of DARZALEX®. 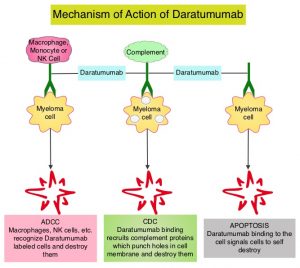 It was concluded that the subcutaneous formulation of DARZALEX® resulted in non-inferior pharmacokinetics and efficacy compared to the current IV formulation, and also importantly offers the potential for a fixed-dose administration, shorter administration times and a lower rate of infusion-related reactions with improved safety profile, in patients with Relapsed or Refractory multiple myeloma.