SUMMARY: The FDA on November 13, 2020, granted accelerated approval to KEYTRUDA® (Pembrolizumab) in combination with chemotherapy for the treatment of patients with locally recurrent, unresectable or metastatic, Triple Negative Breast Cancer (TNBC), whose tumors express PD-L1 (Combined Positive Score-CPS 10 or more) as determined by an FDA approved test. Breast cancer is the most common cancer among women in the US and about 1 in 8 women (13%) will develop invasive breast cancer during their lifetime. Approximately 276,480 new cases of invasive female breast cancer will be diagnosed in 2020 and about 42,170 women will die of the disease. Triple Negative Breast Cancer (TNBC) is a heterogeneous, molecularly diverse group of breast cancers and are ER (Estrogen Receptor), PR (Progesterone Receptor) and HER2 (Human Epidermal Growth Factor Receptor-2) negative. TNBC accounts for 15-20% of invasive breast cancers, with a higher incidence noted in young patients and African American females. It is usually aggressive, and tumors tend to be high grade, and patients with TNBC are at a higher risk of both local and distant recurrence and often develop visceral metastases. Those with metastatic disease have one of the worst prognoses of all cancers with a median Overall Survival of 13 months. The majority of patients with TNBC who develop metastatic disease do so within the first 3 years after diagnosis, whereas those without recurrence during this period of time have survival rates, similar to those with ER-positive breast cancers. The lack of known recurrent oncogenic drivers in patients with metastatic TNBC, presents a major therapeutic challenge. Overall survival among patients with pretreated metastatic TNBC has not changed over the past 2 decades and standard chemotherapy is associated with low response rates of 10-15% and a Progression Free Survival (PFS) of only 2-3 months. 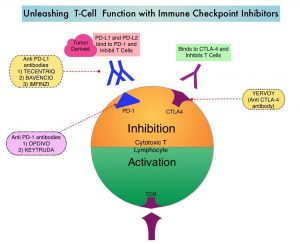 KEYTRUDA® is a fully humanized, Immunoglobulin G4, anti-PD-1, monoclonal antibody, that binds to the PD-1 receptor and blocks its interaction with ligands PD-L1 and PD-L2. It thereby reverses the PD-1 pathway-mediated inhibition of the immune response, and unleashes the tumor-specific effector T cells. The rationale for combining chemotherapy with immunotherapy is that cytotoxic chemotherapy releases tumor-specific antigens, and immune checkpoint inhibitors such as KEYTRUDA® when given along with chemotherapy can enhance endogenous anticancer immunity. Single agent KEYTRUDA® in metastatic TNBC demonstrated durable antitumor activity in several studies, with Objective Response Rates (ORRs) ranging from 10% to 21% and improved clinical responses in patients with higher PD-L1 expression. When given along with chemotherapy as a neoadjuvant treatment for patients with high-risk, early-stage TNBC, KEYTRUDA® combination achieved Pathological Complete Response rate of 65%, regardless of PD-L1 expression. Based on this data, KEYTRUDA® in combination with chemotherapy was studied, for first-line treatment of TNBC.

KEYNOTE-355 is a randomized, double-blind, Phase III study, which evaluated the benefit of KEYTRUDA® in combination with one of the three different chemotherapy regimens, nab-Paclitaxel, Paclitaxel, or the non-taxane containing Gemzar/Carboplatin, versus placebo plus one of the three chemotherapy regimens, in patients with previously untreated or locally recurrent inoperable metastatic TNBC. In this study, 847 patients were randomized 2:1 to receive either KEYTRUDA® 200 mg IV on day 1 of each 21-day cycle along with either nab-paclitaxel 100 mg/m2 IV on days 1, 8 and 15 of each 28-day cycle, Paclitaxel 90 mg/m2 IV on days 1, 8 and 15 of each 28-day cycle, or Gemcitabine 1000 mg/m2 IV plus Carboplatin AUC 2, IV on days 1 and 8 of each 21-day cycle (N= 566) or placebo along with one of the three chemotherapy regimens (N= 281). This study was not designed to compare the efficacy of the different chemotherapy regimens. Treatment was continued until disease progression. Patients were stratified by chemotherapy, PD-L1 tumor expression (CPS of 1 or higher versus CPS of less than 1), and prior treatment with the same class of neoadjuvant/adjuvant chemotherapy (Yes versus No). The baseline characteristics of treatment groups were well-balanced. The co-Primary end points of the trial were Progression Free Survival (PFS) and Overall Survival (OS) in patients with PD-L1-positive tumors, and in all patients. Secondary end points were Objective Response Rate (ORR), Duration of Response, Disease Control Rate, and Safety. The median follow up for patients assigned to receive KEYTRUDA® was 17.5 months and 15.5 months for the placebo group. The authors reported the results from an interim analysis conducted by an Independent Data Monitoring Committee (IDMC).

It was concluded that KEYTRUDA® in combination with several chemotherapy regimens, showed a statistically significant and clinically meaningful improvement in PFS, compared with chemotherapy alone, in patients with previously untreated locally recurrent, inoperable or metastatic TNBC, whose tumors expressed PD-L1 with a Combined Positive Score (CPS) of 10 or more. This data may be particularly relevant for patients who may have received a taxane in the adjuvant setting within a year, and could be more appropriately treated with a non-taxane regimen, in combination with KEYTRUDA®.