SUMMARY: The FDA on December 3, 2019 approved TECENTRIQ® (Atezolizumab) in combination with nab-Paclitaxel and Carboplatin for the first-line treatment of adult patients with metastatic non-squamous Non-Small Cell Lung Cancer (NSCLC), with no EGFR or ALK genomic tumor aberrations. Lung cancer is the second most common cancer in both men and women and accounts for about 14% of all new cancers and 27% of all cancer deaths. The American Cancer Society estimates that for 2019, about 228,150 new cases of lung cancer will be diagnosed and 142,670 patients will die of the disease. Lung cancer is the leading cause of cancer-related mortality in the United States. Non-Small Cell Lung Cancer (NSCLC) accounts for approximately 85% of all lung cancers. Of the three main subtypes of NSCLC, 30% are Squamous Cell Carcinomas (SCC), 40% are Adenocarcinomas and 10% are Large Cell Carcinomas. With changes in the cigarette composition and decline in tobacco consumption over the past several decades, Adenocarcinoma now is the most frequent histologic subtype of lung cancer.

Immune checkpoints are cell surface inhibitory proteins/receptors that are expressed on activated T cells. They harness the immune system and prevent uncontrolled immune reactions by switching off the T cells of the immune system. Immuno-Oncology (IO) therapies unleash the T cells by blocking the Immune checkpoint proteins, thereby resulting in T cell proliferation, activation and a therapeutic response. Immunotherapy with PD-1 (Programmed cell Death 1) and PD-L1 (Programmed cell Death Ligand 1) inhibitors have demonstrated a clear survival benefit both as a single agent or in combination, compared with standard chemotherapy, in both treatment-naive and previously treated patients for advanced NSCLC. It is now standard therapy for patients with lung cancer. TECENTRIQ® is an anti PD-L1 monoclonal antibody, designed to directly bind to PD-L1, expressed on tumor cells and tumor-infiltrating immune cells, thereby blocking its interactions with PD-1 and B7.1 receptors and thus enabling the activation of T cells. 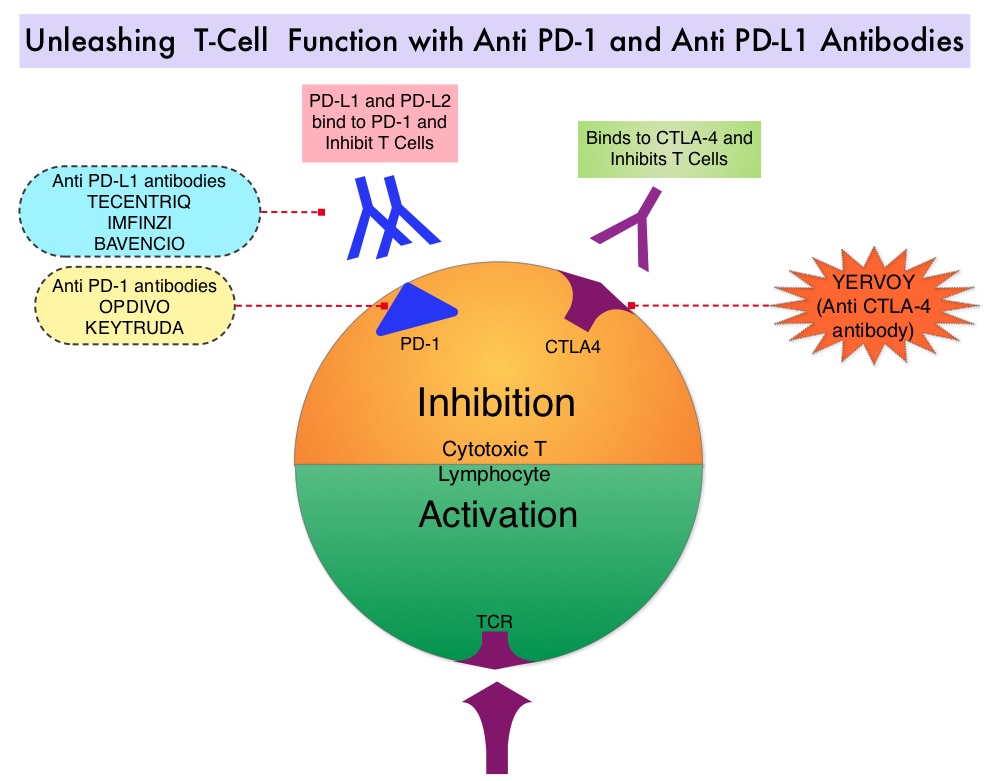 IMpower 130 is an international, multicentre, open-label, randomized, Phase III study, evaluating the efficacy and safety of TECENTRIQ® in combination with Carboplatin and nab-Paclitaxel versus chemotherapy (Carboplatin and nab-Paclitaxel) alone, for chemotherapy-naïve patients with Stage IV non-squamous NSCLC. This study enrolled 724 patients who were randomly assigned 2:1 to receive TECENTRIQ® 1200 mg IV on Day 1, along with Carboplatin AUC 6 on Day 1 and nab-Paclitaxel 100 mg/m2 IV, on days 1, 8 and 15 of each 21-day cycle, for 4 or 6 cycles followed by maintenance TECENTRIQ®, or Carboplatin and nab-Paclitaxel alone (control group), followed by Best Supportive Care during the maintenance treatment phase or Switch maintenance to Pemetrexed every 3 weeks. Stratification factors included gender, baseline liver metastases, and PD-L1 expression. The co-Primary endpoints were investigator-assessed Progression Free Survival and Overall Survival in the intention-to-treat EGFR and ALK wild-type population. The median follow up in the population studied was 19 months.

There was a significant improvement in median Overall Survival in the TECENTRIQ® plus chemotherapy group at 18.6 months compared to 13.9 months in the chemotherapy alone group (HR=0.79; P=0.033), as well as improvement in the median Progression Free Survival (7 months versus 5.5 months, respectively, HR=0.64; P<0.0001). The most common adverse reactions reported in 20% or more of patients in the TECENTRIQ® and chemotherapy group were fatigue/asthenia, nausea, alopecia, constipation, diarrhea, and decreased appetite.