SUMMARY: The FDA on March 26, 2021, approved ABECMA® (Idecabtagene vicleucel) for the treatment of adult patients with Relapsed or Refractory multiple myeloma after four or more prior lines of therapy, including an immunomodulatory agent, a Proteasome Inhibitor, and an anti-CD38 monoclonal antibody. This is the first FDA approved cell-based gene therapy for multiple myeloma. Multiple Myeloma is a clonal disorder of plasma cells in the bone marrow and the American Cancer Society estimates that in the United States, 34,920 new cases will be diagnosed in 2021 and 12,410 patients are expected to die of the disease. Multiple Myeloma (MM) in 2021 remains an incurable disease. Multiple Myeloma is a disease of the elderly, with a median age at diagnosis of 69 years and characterized by intrinsic clonal heterogeneity. Almost all patients eventually will relapse, and patients with a high-risk cytogenetic profile, extramedullary disease or refractory disease have the worst outcomes. The median survival for patients with myeloma is over 10 years. With the introduction of new combinations of antimyeloma agents in earlier lines of therapy, patients with Relapsed/Refractory myeloma often have disease that is refractory to multiple drugs. There is an urgent unmet medical need for agents with novel mechanisms of action that are safe and effective, for patients with aggressive and resistant disease.

Chimeric Antigen Receptor (CAR) T-cell therapy has been associated with long-term disease control in some hematologic malignancies and showed promising activity in a Phase 1 study involving patients with Relapsed or Refractory myeloma. B-cell Maturation Antigen (BCMA) is a member of the Tumor Necrosis Factor superfamily of proteins. It is a transmembrane signaling protein primarily expressed by malignant and normal plasma cells and some mature B cells. BCMA is involved in JNK and NF-kB signaling pathways that induce B-cell development and autoimmune responses. BCMA has been implicated in autoimmune disorders, as well as B-lymphocyte malignancies, Leukemia, Lymphomas, and Multiple Myeloma. 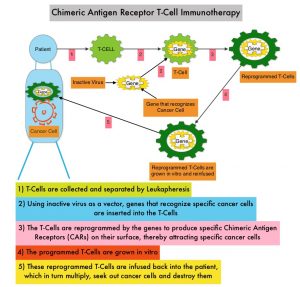 Anti-BCMA CAR T-Cell Therapy ABECMA® is a type of immunotherapy and consists of T cells collected from the patient’s blood in a leukapheresis procedure. These T cells are then stimulated by treating with interleukin 2 (IL-2) and anti-CD3 antibodies in vitro, so that they will actively proliferate and expand to large numbers. These T cells are then genetically engineered to produce special receptors on their surface called Chimeric Antigen Receptors (CAR), by transducing with a gene encoding the engineered CAR, via a retroviral vector such as lentiviral vector. These reprogrammed cytotoxic T cells with the Chimeric Antigen Receptors on their surface are now able to recognize a specific antigen such as BCMA on tumor cells. These genetically engineered and reprogrammed CAR T-cells are grown in the lab and are then infused into the patient. These cells in turn proliferate in the patient’s body and the engineered receptor on the cell surface help recognize and kill cancer cells that expresses that specific antigen such as BCMA. The patient undergoes lymphodepletion chemotherapy with Fludarabine and Cytoxan prior to the introduction of the engineered CAR T-cells. By depleting the number of circulating leukocytes, cytokine production is upregulated and reduces competition for resources, which in turn promotes the expansion of the engineered CAR T-cells.

The FDA approval was based on results from the pivotal, open-label, single-arm, multicenter, multinational, Phase II study (KarMMa trial), in which the efficacy and safety of ABECMA® was evaluated in adults with Relapsed and Refractory multiple myeloma. In this study, 128 patients with persistent disease after at least three previous regimens including a Proteasome Inhibitor, an immunomodulatory agent, and an anti-CD38 antibody, received ABECMA® target doses of 150×106 to 450×106 CAR-positive (CAR+) T cells, after receiving lymphodepleting chemotherapy. Lymphodepletion therapy consisted of Fludarabine 30 mg/m2 IV and Cyclophosphamide 300 mg/m2 IV given on 3 consecutive days, followed by 2 days of rest before ABECMA® infusion. The median patient age was 61 years and the median time from diagnosis was 6 years. About 51% of patients had a high tumor burden (50% or more bone marrow plasma cells), 39% had extramedullary disease and 35% had a high-risk cytogenetic abnormalities, defined as del(17p), t(4;14), or t(14;16). Patients had received a median of 6 previous antimyeloma regimens and 94% had received previous Autologous Hematopoietic Stem Cell Transplants. The Primary end point was an Overall Response Rate (ORR) as assessed by an Independent Review Committee (IRC) and key Secondary end point was a Complete Response or better (comprising complete and stringent Complete Responses). Other efficacy endpoints include Time to Response, Duration of Response, Progression Free Survival (PFS), Overall Survival (OS), Minimal Residual Disease (MRD) evaluated by Next-Generation Sequencing (NGS) assay, and Safety.

At a median follow up of 13.3 months, the ORR was 73% and 33% had a complete or stringent Complete Response. Of those with a complete or stringent Complete Response, 79% had MRD-negative status at a sensitivity level of 10−5, corresponding to 26% of the treated population. This benefit was consistently observed in most subgroups examined, including older patients, those who received bridging therapy, and those with aggressive disease features, including high-risk cytogenetics, triple or penta-refractory disease, a high tumor burden, and extramedullary disease. The median time to first response was 1.0 month and the median time to a Complete Response or better was 2.8 months. The estimated median Duration of Response was 10.7 months for all patients and 11.3 months among those receiving the highest target dose. The response duration increased with the depth of response. The median PFS was 8.8 months for all patients and 20.2 months in patients having a complete or stringent Complete Response. Data on Overall Survival are immature. Cellular kinetic analysis confirmed CAR+ T cells in 59% at 6 months and 36% at 12 months after infusion. Common toxicities included neutropenia, anemia and thrombocytopenia. Cytokine Release Syndrome was reported in 84% of patients including 5% Grade 3 or higher events. Neurotoxic effects developed in 18% of patients.

It was concluded that ABECMA® induced deep and durable responses in majority of heavily pretreated patients with Refractory and Relapsed myeloma, and fulfills a high unmet need for this patient group.