SUMMARY: Breast cancer is the most common cancer among women in the US and about 1 in 8 women (13%) will develop invasive breast cancer during their lifetime. Approximately 276,480 new cases of invasive female breast cancer will be diagnosed in 2020 and about 42,170 women will die of the disease. Approximately 15-20% of invasive breast cancers overexpress HER2/neu oncogene, which is a negative predictor of outcomes without systemic therapy. HERCEPTIN® (Trastuzumab) is a humanized monoclonal antibody targeting HER2, and adjuvant and neoadjuvant chemotherapy given along with HERCEPTIN® reduces the risk of disease recurrence and death, among patients with HER2-positive, early stage as well as advanced metastatic breast cancer. Since the approval of HERCEPTIN®, several other HER2-targeted therapies have become available. The duration of adjuvant HERCEPTIN® therapy has been 12 months and this length of treatment was empirically adopted from the pivotal registration trials.

KADCYLA® is an Antibody-Drug Conjugate (ADC) comprised of the antibody HERCEPTIN® and the chemotherapy agent Emtansine, linked together. Upon binding to the HER2 receptor, it not only inhibits the HER2 signaling pathways but also delivers a chemotherapy agent Emtansine, a microtubule inhibitor, directly inside the tumor cells. This agent is internalized by lysosomes and destroys the HER2-positive tumor cells upon intracellular release. It is well established that patients with HER2-positive early breast cancer following HERCEPTIN® based neoadjuvant therapies have a pathological Complete Response (pCR) rate of 40-60%. Those without a pCR tend to have significantly less favorable outcomes. These patients irrespective of pathological response status complete their standard adjuvant therapy which includes 12 months of HER2-targeted therapy. KATHERINE trial was conducted to address an unmet need, and evaluate the benefit of switching from standard HER2-directed therapy to single-agent KADCYLA®, after neoadjuvant chemotherapy, in patients with residual invasive cancer at surgery. 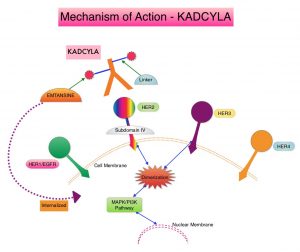 The KATHERINE trial is an open-label, Phase III global study, which compared KADCYLA® with HERCEPTIN®, as an adjuvant treatment for patients with HER2-positive early breast cancer, who had residual invasive disease following neoadjuvant chemotherapy and HERCEPTIN®. This study included 1,486 patients with HER2-positive early stage breast cancer, who were found to have residual invasive disease in the breast or axillary lymph nodes at surgery, following at least six cycles (16 weeks) of neoadjuvant chemotherapy with a Taxane (with or without Anthracycline) and HERCEPTIN®. Within 12 weeks of surgery, patients (N=1486) were randomly assigned in a 1:1 ratio to KADCYLA® 3.6 mg/kg IV every 3 weeks or HERCEPTIN® 6 mg/kg IV every 3 weeks, for 14 cycles (743 patients in each group). Both treatment groups were well balanced and Hormone Receptor positive disease was present in 72% of the patients. The Primary end point was invasive Disease Free Survival (iDFS-defined as freedom from ipsilateral invasive breast tumor recurrence, ipsilateral locoregional invasive breast cancer recurrence, contralateral invasive breast cancer, distant recurrence, or death from any cause). At the prespecified interim analysis, invasive disease occurred in 12.2% of patients who received KADCYLA® and 22.2% of patients who received HERCEPTIN®. The estimated percentage of patients who were free of invasive disease at 3 years was 88.3% in the KADCYLA® group and 77.0% in the HERCEPTIN® group, which translated to an absolute improvement of 11.3%. Invasive Disease Free Survival (iDFS), which was the Primary end point of the study, was significantly higher in the KADCYLA® group than in the HERCEPTIN® group (HR=0.50; P<0.001).This suggested that KADCYLA® reduced the risk of developing an invasive breast cancer recurrence or death by 50%.

The authors in this publication reported the exploratory analyses of the relationship between iDFS, and biomarkers potentially related to response. The authors focused on pathways that have been implicated in resistance to HER2 treatment such as pathways associated with PIK3CA mutations, as well as HER2 and PD-L1 expression in the post-neoadjuvant residual surgical samples.

The authors noted that in the ITT population (N=743), PIK3CA mutation status had no impact on outcomes when treated with KADCYLA®. Among those patients with mutated tumors who received KADCYLA® and HERCEPTIN®, the iDFS rates were 88.9% versus 77.9%, respectively (HR=0.54) and among those with non-mutated tumors the Invasive Disease Free Survival rates were 88.3% versus 77.0%, respectively (HR=0.48). There was no prognostic impact of PIK3CA mutations in this cohort of patients and the 3 year iDFS rates were almost identical between the mutated and non-mutated tumors.

When patients were evaluated based on their tumor PD-L1 expression, low PD-L1 expression in post-neoadjuvant residual tumors was associated with a worse outcome for those who received treatment with HERCEPTIN®, whereas treatment with KADCYLA® did not impact outcomes. These findings suggested that PD-L1 may be involved in some resistance mechanisms.

It was concluded that in the KATHERINE trial biomarker analysis, PIK3CA mutation status did not influence outcomes in either treatment groups. However, in the post-neoadjuvant HERCEPTIN® group, high HER2 expression and low PD-L1 expression was associated with less favorable outcomes. The benefit with KADCYLA® in this patient population was independent of all biomarkers assessed.