SUMMARY: The American Cancer Society estimates that for 2022, about 236,740 new cases of lung cancer will be diagnosed and 135,360 patients will die of the disease. Lung cancer is the leading cause of cancer-related mortality in the United States. Non-Small Cell Lung Cancer (NSCLC) accounts for approximately 85% of all lung cancers. Of the three main subtypes of NSCLC, 30% are Squamous Cell Carcinomas (SCC), 40% are Adenocarcinomas and 10% are Large Cell Carcinomas. With changes in the cigarette composition and decline in tobacco consumption over the past several decades, Adenocarcinoma now is the most frequent histologic subtype of lung cancer.

The HER or erbB family of receptors consist of HER1, HER2, HER3 and HER4. HER2 is a Tyrosine Kinase Receptor expressed on the surface of several tumor types including Breast, Gastric, Lung and Colorectal cancers. It is a growth-promoting protein and HER2 overexpression/HER2 gene amplification is often associated with aggressive disease and poor prognosis in certain tumor types. However, HER2 overexpression and gene amplification are associated with distinct molecular entities and have limited therapeutic value in lung cancer.

HER2 mutations unlike HER2 overexpression and gene amplification are oncogenic drivers, and have been detected in 2 to 3% of NSCLCs. They are more often detected in female patients and never-smokers, and almost exclusively in Adenocarcinomas. Majority of of HER2 mutations (80-90%) occur in exon 20, as either a duplication or an insertion of 12 nucleotides, resulting in the addition of four amino acids (YVMA) at codon 775 in the kinase domain. This distinct molecular entity is characterized by specific pathological and clinical behavior. These acquired HER2 gene mutations have been independently associated with cancer cell growth and poor prognosis. There are currently no therapies approved specifically for the treatment HER2 mutant NSCLC, and is therefore an unmet need.

ENHERTU® (Trastuzumab Deruxtecan) is an Antibody-Drug Conjugate (ADC) composed of a humanized monoclonal antibody specifically targeting HER2, with the amino acid sequence similar to HERCEPTIN® (Trastuzumab), attached to a potent cytotoxic Topoisomerase I inhibitor payload by a cleavable tetrapeptide-based linker. ENHERTU® has a favorable pharmacokinetic profile and the tetrapeptide-based linker is stable in the plasma and is selectively cleaved by cathepsins that are up-regulated in tumor cells. Unlike KADCYLA® (ado-Trastuzumab emtansine), which is also an Antibody-Drug Conjugate, ENHERTU® has a higher drug-to-antibody ratio (8 versus 4), the released payload easily crosses the cell membrane with resulting potent cytotoxic effect on neighboring tumor cells regardless of target expression, and the released cytotoxic agent (payload) has a short half-life, minimizing systemic exposure. ENHERTU® is approved in the US for the treatment of adult patients with unresectable or metastatic HER2 positive breast cancer who received two or more prior anti-HER2 based regimens, and locally advanced or metastatic HER2-positive Gastric or GastroEsophageal Junction adenocarcinoma who have received a prior Trastuzumab based regimen. Translational research demonstrated that HER2-mutant NSCLC may preferentially internalize the HER2 receptor Antibody-Drug Conjugate complex regardless of HER2 protein expression, and overcome resistance to other HER2-targeted agents. 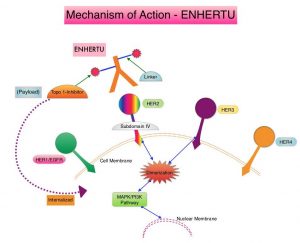 DESTINY-Lung01 is a global, multicenter, open-label, two-cohort, Phase II study, conducted to evaluate the efficacy and safety of ENHERTU® in patients with HER2 mutant or HER2 overexpressing (defined as ImmunoHistoChemistry-IHC 3+ or IHC 2+), unresectable and metastatic non-squamous NSCLC. A total of 91 patients with HER2-mutant NSCLC were enrolled between May 30, 2018, and July 21, 2020 and treated with ENHERTU®. Patients who had previously been treated with a HER2 antibody or an Antibody-Drug Conjugate were ineligible for participation, but those who had previously received a HER2 Tyrosine Kinase Inhibitor such as Afatinib, Pyrotinib, or Poziotinib were eligible. The median patient age was 60 yrs and enrolled patients had a median of two prior lines of therapy, with majority of patients having received platinum-based chemotherapy (95%) and anti-PD-1 or PD-L1 treatment (66%). About 20% of patients received Docetaxel and 14% received HER TKIs. For the majority of patients (93%), HER2 mutations were located in the kinase domain. Patients received ENHERTU® 6.4 mg/kg every 3 weeks by intravenous infusion. The Primary endpoint was Objective Response Rate (ORR) as assessed by Independent Central Review. Secondary endpoints included Disease Control Rate (DCR), Duration of Response (DoR), Progression Free Survival (PFS), Overall Survival (OS) and Safety. At the time of data cutoff, the median duration of treatment was 6.9 months and treatment was ongoing for 16% of patients.

At a median follow up 13.1 months, the ORR was 55% and the median Duration of Response was 9.3 months. Responses were observed across different HER2 mutation subtypes. The median PFS was 8.2 months and the median OS was 17.8 months. The most common Grade 3 or higher drug-related Adverse Event was neutropenia noted in 19% of patients and adjudicated drug-related Interstitial Lung Disease occurred in 26% of patients and resulted in 2 deaths.

It was concluded that ENHERTU® demonstrated promising clinical activity, with a high Objective Response Rate and durable responses, in a heavily pretreated population of patients with HER2-mutated NSCLC.