SUMMARY: It is estimated that 6150 individuals will be diagnosed with Acute Lymphocytic Leukemia (ALL) in the US and 1520 patients will die of the disease. ALL is more common in children, but can occur at any age and arises from malignant transformation of B- or T-cell progenitor cells. These cells express surface antigens that define their respective lineages. Precursor B-cell ALL cells typically express CD10, CD19, and CD34 on their surface, along with nuclear Terminal deoxynucleotide Transferase (TdT), whereas precursor T-cell ALL cells commonly express CD2, CD3, CD7, CD34, and TdT.

Philadelphia Chromosome (Chromosome 22) is a result of a reciprocal translocation between chromosomes 9 and 22, wherein the ABL gene from chromosome 9 fuses with the BCR gene on chromosome 22. As a result, the auto inhibitory function of the ABL gene is lost and the BCR-ABL fusion gene is activated resulting in cell proliferation and leukemic transformation of hematopoietic stem cells. Approximately 20% of adults and a small percentage of children with ALL are Philadelphia Chromosome (Ph) positive, and in the majority of children and in more than 50% of adults with Ph-positive ALL, the molecular abnormality (fusion protein) is different from that in Ph-positive Chronic Myelogenous Leukemia (p190 versus p210).

Adult patients with Ph-positive ALL are rarely cured with chemotherapy and the prognosis in these patients has markedly improved with the availability of BCR/ABL targeted Tyrosine Kinase Inhibitors (TKIs). Use of these TKIs with or without chemotherapy can result in a Complete Hematologic Remission in 94-100% of patients, irrespective of age. Eligible patients are then usually referred for allogeneic Hematopoietic Stem Cell Transplant (allo HSCT). To increase the chance of cure and decrease the likelihood of relapse, sustained decrease in Minimal Residual Disease is required, with a reduction in the tumor burden to less than 1 tumor cell in 10,000 bone marrow mononuclear cells. 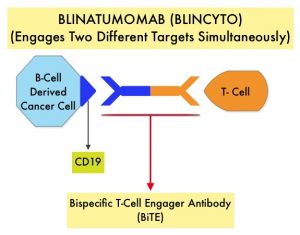 BiTE® technology (Bispecific T cell Engager antibody) engages the body’s immune system to detect and target malignant cells. These modified antibodies are designed to engage two different targets simultaneously, thereby placing the patient’s T cells within reach of the targeted cancer cell and facilitating apoptosis of the cancer cell. BiTE® antibodies are currently being investigated to treat a wide variety of malignancies. BLINCYTO® (Blinatumomab) is a BiTE® antibody designed to activate the patients T cells with its anti-CD3 group and then bind them to tumor cells with its anti-CD19 group, thus promoting cellular cytotoxicity. CD19 is a protein expressed on the surface of B-cell derived leukemias and lymphomas

The Italian GIMEMA investigators adopted a chemotherapy-free induction strategy and conducted a Phase II single-group trial, in which adults (no upper age limit) with newly diagnosed Ph-positive ALL, received first line therapy with SPRYCEL® (Dasatinib) plus glucocorticoids, followed by two cycles of BLINCYTO® (Blinatumomab). This study enrolled 63 patients with newly diagnosed Ph-positive ALL, and patients received prephase treatment with a glucocorticoid for 7 days before they received SPRYCEL®, and glucocorticoids were continued for an additional 24 days and discontinued on day 31. SPRYCEL® 140 mg orally once daily was administered as induction therapy for 85 days.

Patients who completed the induction phase received consolidation treatment with BLINCYTO® 28 mcg per day, and before each BLINCYTO® cycle, Dexamethasone 20 mg was administered. A minimum of two cycles of BLINCYTO® was mandatory and up to three additional cycles were allowed. Levetiracetam 500 mg twice daily was administered during treatment with BLINCYTO®, to prevent CNS adverse events. SPRYCEL® was continued during treatment with BLINCYTO®, and after BLINCYTO® administration, except in those patients in whom a T315I mutation was detected during the induction phase. Lumbar punctures were performed at diagnosis, at days 14, 22, 43, 57, and 85, and at the end of each BLINCYTO® cycle, for a total of 12 procedures. The choice of postconsolidation treatment, including allogeneic HSCT and subsequent administration of a Tyrosine Kinase Inhibitor, was at the discretion of the investigators. The median patient age was 54 years, 54% of the patients were women, and the median WBC was 13,000 per cubic millimeter. Of the 63 enrolled patients, 65% had the p190 fusion protein, 27% had the p210 fusion protein, and 8% had both. The most frequent molecular aberration was IKZF1 deletion (54%). The Primary endpoint was sustained molecular response in the bone marrow after this treatment.

Complete Hematologic Response was observed in 98% of the patients at the end of SPRYCEL® induction therapy (day 85), and the molecular response rate was 29%, and this percentage increased to 60% after two cycles of BLINCYTO®, with further increase in molecular responses after additional cycles of treatment with BLINCYTO®. At a median follow up of 18 months, Overall Survival was 95% and Disease Free Survival (DFS) was 88%. The probability of DFS among patients who had a molecular response at the end of induction therapy (day 85) was 100%, as compared with 85% among patients with a non-molecular response. There was no significant difference noted in the DFS between patients with p190 and those with p210. Patients who had an IKZF1 deletion along with additional genetic aberrations had lower Disease Free Survivals. Mutations in the ABL1 gene were detected in 6 patients who had increased Minimal Residual Disease during induction therapy, and all these mutations were cleared by BLINCYTO®. A total of 24 patients received an allogeneic HSCT, and the transplantation-related mortality was 4%. The most common adverse events of any grade were pyrexia, cytomegalovirus infection/reactivation and neutropenia.

The authors concluded that a chemotherapy-free induction and consolidation first-line treatment with SPRYCEL® and BLINCYTO®, that was based on a targeted and immunotherapeutic strategy respectively, was associated with high incidences of molecular response and survival, with fewer Grade 3 or higher adverse events, in adults with Philadelphia chromosome-positive ALL.