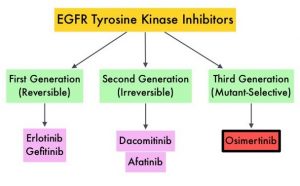 Approximately 10-15% of Caucasian patients and 35-50% of Asian patients with Adenocarcinomas, harbor activating EGFR (Epidermal Growth Factor Receptor) mutations and 90% of these mutations are either Exon 19 deletions or L858R substitution mutation in Exon 21. Approximately 25% of patients with EGFR mutated NSCLC have brain metastases at diagnosis, increasing to approximately 40% within two years of diagnosis. The presence of brain metastases often reduces median survival to less than eight months. EGFR-Tyrosine Kinase Inhibitors (TKIs) such as TARCEVA® (Erlotinib), IRESSA® (Gefitinib) and GILOTRIF® (Afatinib), have demonstrated a 60-70% response rate as monotherapy when administered as first line treatment, in patients with metastatic NSCLC, who harbor the sensitizing EGFR mutations. However, majority of these patients experience disease progression within 9-14 months. This resistance to frontline EGFR TKI therapy has been attributed to the most common, acquired T790M “gatekeeper” point mutation in EGFR, identified in 50-60% of patients.

Surgical resection is the primary treatment for approximately 30% of patients with NSCLC who present with early Stage (I–IIIA) disease. These patients are often treated with platinum-based adjuvant chemotherapy to decrease the risk of recurrence. Nonetheless, 45-75% of these patients develop recurrent disease. There is therefore an unmet need for this patient population.

ADAURA is a global, double-blind, randomized Phase III study, which assessed the efficacy and safety of TAGRISSO® versus placebo in patients with Stage IB–IIIA EGFR mutated NSCLC, after complete tumor resection and adjuvant chemotherapy, when indicated. In this study, 682 patients with completely resected Stage IB, II, IIIA NSCLC, with or without postoperative adjuvant chemotherapy, were randomly assigned 1:1 to receive either TAGRISSO® 80 mg orally once daily (N=339) or placebo (N=343) once daily, for up to 3 years. Eligible patients had an ECOG Performance Status of 0 or 1, with confirmed EGFR mutations (Exon 19del or L858R). Treatment groups were well balanced and patients were stratified by Stage (IB/II/IIIA), mutation type (Exon 19del/L858R), and race (Asian/non-Asian).
Most patients with Stage II to IIIA disease (76%) and approximately a quarter of the patients with Stage IB disease (26%) received adjuvant platinum-based chemotherapy. The Primary endpoint was Disease Free Survival (DFS) in Stage II–IIIA patients. Secondary endpoints included DFS in the overall population of patients with Stage IB to IIIA disease, Overall Survival (OS) and safety. Following Independent Data Monitoring Committee recommendation, the trial was unblinded early, due to efficacy. The authors reported the results from the unplanned interim analysis.

It was noted that in the patients with Stage II/IIIA disease, the DFS had not been reached with TAGRISSO® versus 19.6 months with placebo (HR=0.17; P<0.001). This was equal to an 83% reduction in the risk of recurrence or death, indicating a significantly longer DFS among patients in the TAGRISSO® group, compared to those in the placebo group. The 2-year DFS rate in this patient group with TAGRISSO® was 90% versus 44% with placebo.

In the overall population, which included Stage IB to IIIA disease, the median DFS was not reached with TAGRISSO® versus 27.5 months with placebo (HR=0.20; P<0.001). This Hazard Ratio equaled an 80% reduction in the risk of disease recurrence or death among patients in the TAGRISSO® group compared to those in the placebo group. The 2-year DFS rate in the overall population was 89% with TAGRISSO® versus 52% with placebo.

The benefit favoring TAGRISSO® with respect to DFS was observed consistently across all predefined subgroups including disease Stages IB, II, and IIIA and use or nonuse of adjuvant chemotherapy. The benefit with TAGRISSO® was greater at more advanced stages of disease (among patients with Stage IIIA disease, the overall HR was 0.12, among those with Stage II disease, the HR was 0.17, and among those with Stage IB disease, the HR was 0.39). At 2 years, 98% of the patients in the TAGRISSO® group and 85% of the patients in the placebo group were alive without CNS-related disease (HR for CNS disease recurrence or death=0.18). This indicated an 82% reduction in the risk of CNS disease recurrence or death with TAGRISSO®. The Overall Survival data were immature at the time of this interim analysis. Adverse Events were consistent with the known safety profile of TAGRISSO®.

The authors concluded that adjuvant TAGRISSO® is the first targeted agent in a global randomized trial, to show a statistically significant and clinically meaningful improvement in Disease Free Survival, among patients with Stage IB/II/IIIA EGFR mutation-positive NSCLC, and provides an effective new treatment strategy for this patient group.