SUMMARY: Lung cancer is the second most common cancer in both men and women and accounts for about 14% of all new cancers and 27% of all cancer deaths. The American Cancer Society estimates that for 2018 about 234,030 new cases of lung cancer will be diagnosed and over 154,050 patients will die of the disease. Lung cancer is the leading cause of cancer-related mortality in the United States. Patients with advanced NSCLC (Non-Small Cell Lung Cancer) often receive either platinum-doublet chemotherapy combination as first line therapy or KEYTRUDA® (Pembrolizumab) if the tumor PD-L1 expression is 50% or more. About 20-25% of patients benefit from immunotherapy. Other biomarkers besides PD-L1 are needed, to select appropriate patients for immunotherapy.

Tumor Mutational Burden (TMB) has recently emerged as a potential biomarker for immunotherapy with anti PD-1 antibodies. TMB can be measured using Next-Generation Sequencing (NGS) and is defined as the number of somatic, coding base substitutions and short insertions and deletions (indels) per megabase of genome examined. In a previously published trial (CheckMate 568), patients most likely to have a response to a combination of OPDIVO® (Nivolumab) plus YERVOY® (Ipilimumab), irrespective of tumor PD-L1 expression level in NSCLC, had a TMB of at least 10 mutations per megabase. This was the basis for CheckMate 227, which evaluated the efficacy of OPDIVO® and OPDIVO®-based regimens, as first line treatment in biomarker-selected groups of patients with advanced NSCLC. 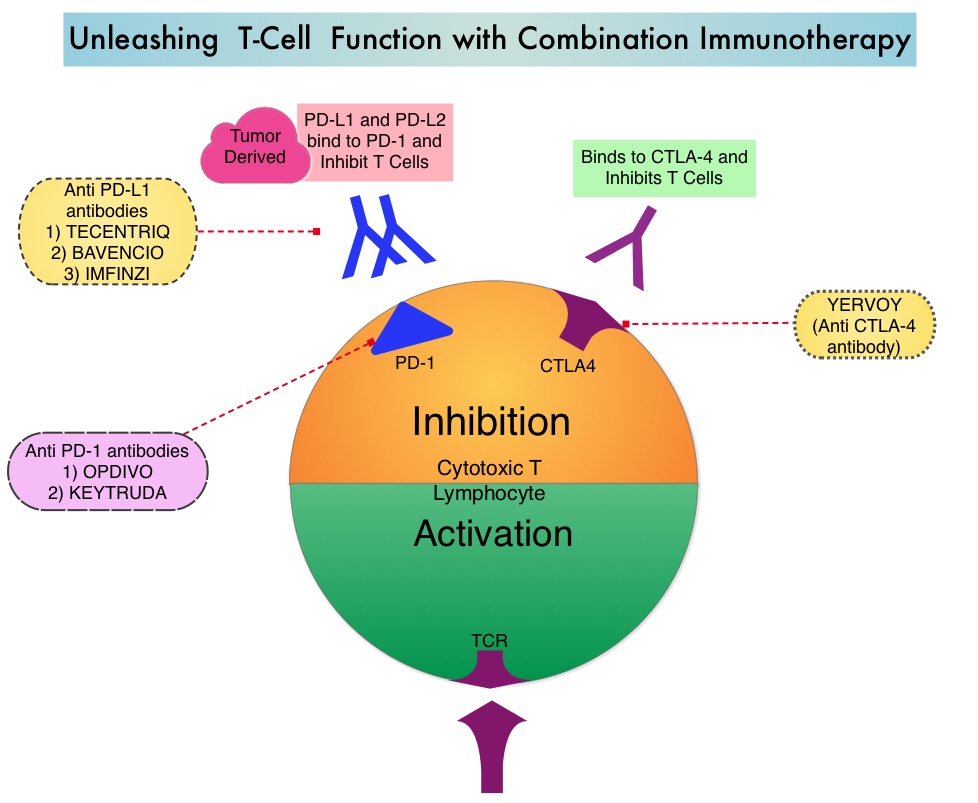 CheckMate 227 is a three part, open-label, randomized, phase III trial, designed to compare different OPDIVO® -based regimens with chemotherapy in distinct patient populations. This study enrolled 1,739 patients with previously untreated Stage IV or recurrent NSCLC with no known sensitizing EGFR or ALK mutations and patients were randomized in a 1:1:1 ratio and the comparison was between either OPDIVO®, OPDIVO® plus YERVOY® or OPDIVO® plus platinum-doublet chemotherapy and platinum-doublet chemotherapy alone. Patients were stratified according to tumor histology and PD-L1 expression of 1% or more (positive) or less than 1% (negative). The study incorporated Tumor Mutational Burden (TMB) as a biomarker. This was determined by the FoundationOne CDx assay, an FDA approved test for molecular profiling, using the validated cutoff of TMB of 10 or more mutations/megabase as High, and less than 10 mutations/megabase as Low.