SUMMARY: The American Cancer Society estimates that in 2019, 21,450 new cases of Acute Myeloid Leukemia (AML) will be diagnosed in the United States and 10,920 patients will die of the disease. AML can be considered as a group of heterogeneous diseases with different clinical behavior and outcomes. A significant percentage of patients with newly diagnosed AML are not candidates for intensive chemotherapy. Even with the best available therapies, the 5 year Overall Survival in patients 65 years of age or older is less than 5%.

Cytogenetic analysis has been part of routine evaluation when caring for patients with AML. By predicting resistance to therapy, tumor cytogenetics will stratify patients, based on risk and help manage them accordingly. Even though cytotoxic chemotherapy may lead to long term remission and cure in a minority of patients with favorable cytogenetics, patients with high risk features such as unfavorable cytogenetics, molecular abnormalities, prior myelodysplasia and advanced age, have poor outcomes with conventional chemotherapy alone. More importantly, with the understanding of molecular pathology of AML, personalized and targeted therapies are becoming an important part of the AML treatment armamentarium. 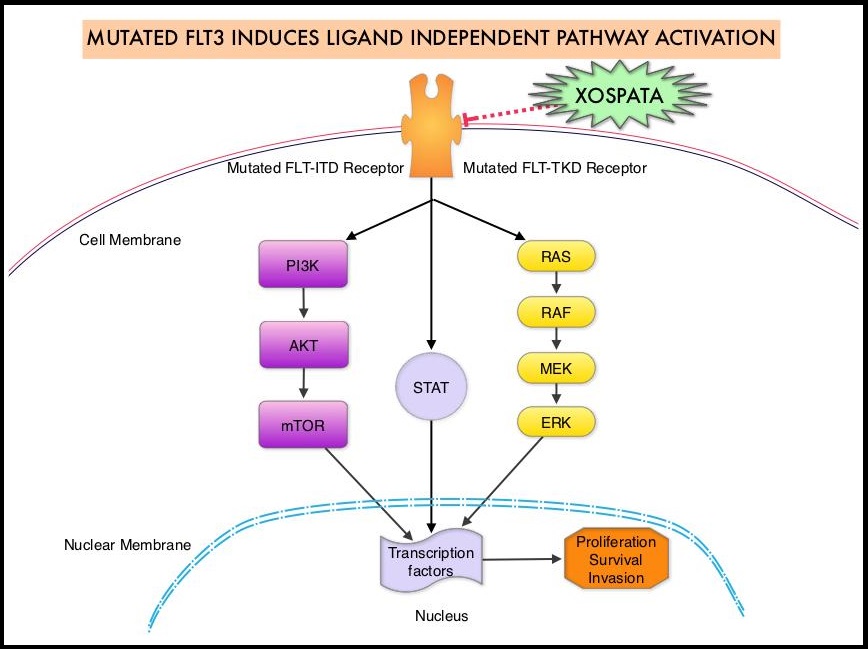 The Fms-Like Tyrosine kinase 3 (FLT3) is a cytokine receptor tyrosine kinase in the PDGF family of growth factor receptors. It is located on the cell surface (transmembrane) of early hematopoietic stem and progenitor cells and regulates their proliferation and differentiation. It plays an important role in both normal and malignant hematopoiesis by activating key signaling pathways. Activating mutations in the FLT3 receptor is the most common genetic abnormality in AML and is detected in approximately 30% of the patients. FLT3 mutations occur most often as Internal Tandem Duplications (FLT3-ITD) or point mutations at codon D835 (FLT3-Tyrosine Kinase Domain or TKD). Approximately 80% of AML patients with a FLT3 mutation will have the FLT3-ITD, and about 15% will have both FLT3-ITD and FLT3-TKD, and about 5% will have FLT3-TKD alone. The presence of FLT3-ITD mutations can negate the benefit of any other favorable molecular and cytogenetic features. Patients with FLT3-ITD mutations are predicted to have poor outcomes with shorter remission duration and significantly decreased leukemia-free and Overall Survival. FLT3-TKD can confer resistance to other Tyrosine Kinase Inhibitors and frequently do not respond to salvage chemotherapy.

XOSPATA® (Gilteritinib) is a highly selective oral FLT3/AXL Tyrosine Kinase Inhibitor with activity against both FLT3-ITD and FLT3-TKD mutations. Tyrosine Kinase AXL has been implicated in FLT3 inhibitor resistance. Another FLT3 inhibitor, RYDAPT® (Midostaurin), is also approved, but in combination with standard Cytarabine and Daunorubicin-based chemotherapy for patients with newly diagnosed FLT3-mutated AML. However, for patients with relapsed or refractory AML, RYDAPT® has not conferred durable clinical benefit as a single agent. Unlike XOSPATA®, RYDAPT® is a not selective and is a multikinase inhibitor and inhibits FLT3, PDGFR, c-KIT (CD 117), VEGFR, and protein kinase C. Single-agent XOSPATA®, in a phase 1-2 study, resulted in a 41% composite Complete Remission rate (Complete Remission with or without normal hematologic recovery), among patients with relapsed or refractory FLT3-mutated AML. Based on this information, the authors conducted a multicenter, randomized trial comparing XOSPATA® with conventional salvage chemotherapy regimens in patients with relapsed or refractory FLT3-mutated AML.

The ADMIRAL trial is an international, multicenter, randomized, Phase III study in which 371 patients with relapsed or refractory FLT3 mutated AML were randomly assigned in a 2:1 ratio to receive either XOSPATA® 120 mg orally once daily or salvage chemotherapy, in 28-day cycles. The median age was 62 years, approximately 60% of the patients had relapsed AML and 39% had primary refractory disease. Over 85% of patients had received previous induction therapy with Anthracyclines but not FLT3 inhibitors. The two Primary end points were Overall Survival and the percentage of patients who had Complete Remission with full or partial hematologic recovery. Secondary end points included Event-Free Survival (freedom from treatment failure – relapse or lack of remission or death) and the percentage of patients who had Complete Remission. The median duration of follow up for Overall Survival was 17.8 months.