SUMMARY: Lung cancer is the second most common cancer in both men and women and accounts for about 14% of all new cancers. The American Cancer Society estimates that for 2018 about 234,030 new cases of lung cancer will be diagnosed and over 154,050 patients will die of the disease. Non Small Cell Lung Cancer (NSCLC) accounts for approximately 85% of all lung cancers. Of the three main subtypes of Non Small Cell Lung Cancer (NSCLC), 30% are Squamous Cell Carcinomas (SCC), 40% are Adenocarcinomas and 10% are Large cell carcinomas. With changes in the cigarette composition and decline in tobacco consumption over the past several decades, Adenocarcinoma now is the most frequent histologic subtype of lung cancer. 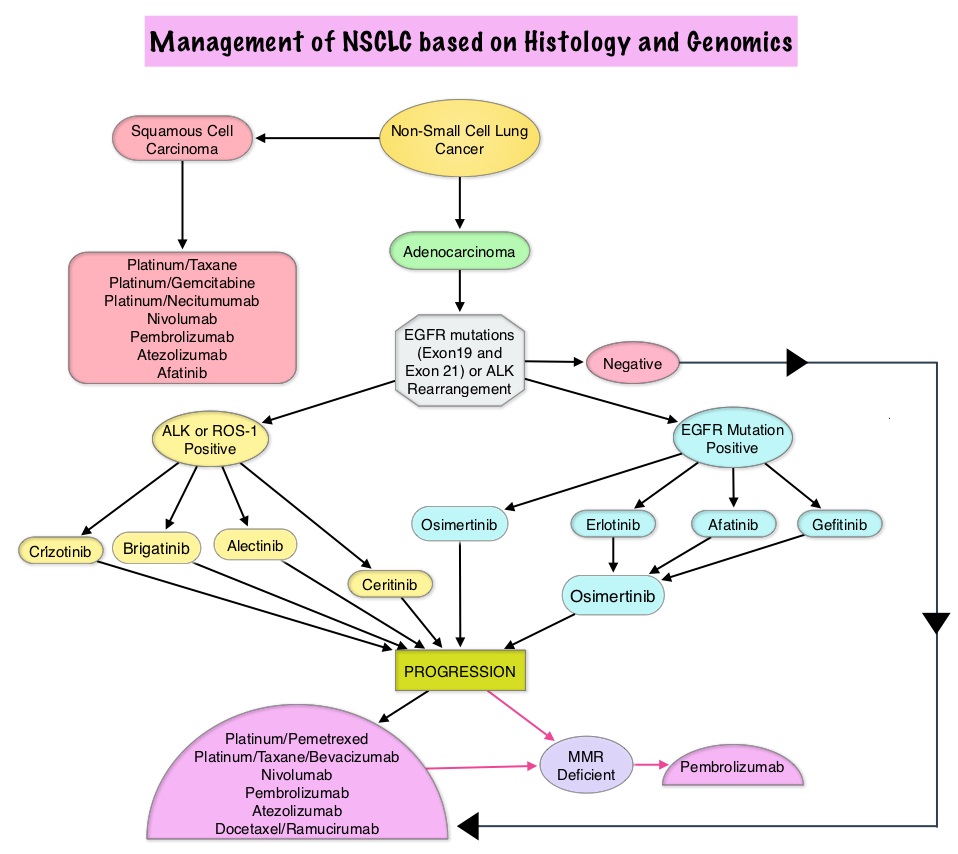 The College of American Pathologists, the International Association for the Study of Lung Cancer, and the Association for Molecular Pathology convened an expert panel in 2013 and had published evidence-based guideline to set standards for the molecular analysis of lung cancers and to guide treatment decisions with targeted therapies. With the availability of new medical information and technological advances, this expert panel which comprised of pathologists, oncologists, pulmonologists, and laboratory scientists, issued an evidence based update which included 18 new recommendations, along with 3 updated recommendations from the 2013 guideline, asking 5 key questions.

Key Question 1: Which new genes should be tested for lung cancer patients?

a) ROS1 testing must be performed on all lung adenocarcinoma patients, irrespective of clinical characteristics.

b) ROS1 ImmunoHistoChemistry (IHC) may be used as a screening test in lung adenocarcinoma patients; however, positive ROS1 IHC results should be confirmed by a molecular or cytogenetic method.

c) BRAF, RET, ERBB2 (HER2), KRAS and MET molecular testing are currently not indicated as a routine stand-alone assay, outside the context of a clinical trial. It is appropriate to include molecular testing for these genes, as part of larger testing panels performed either initially or when routine EGFR, ALK, and ROS1 testing are negative.

Key Question 2: What methods should be used to perform molecular testing?

a) ImmunoHistoChemistry (IHC) is an equivalent alternative to Fluorescence In Situ Hybridization (FISH) for ALK testing.

b) Multiplexed genetic sequencing panels are preferred over multiple single-gene tests, to identify other treatment options beyond EGFR, ALK, and ROS1.

c) Laboratories should ensure test results that are unexpected, discordant, equivocal or otherwise of low confidence, are confirmed or resolved, using an alternative method or sample.

Key Question 3: Is molecular testing appropriate for lung cancers that do not have an adenocarcinoma component?

a) Physicians may use molecular biomarker testing in tumors with histologies other than adenocarcinoma when clinical features indicate a higher probability of an oncogenic driver.

Key Question 4: What testing is indicated for patients with targetable mutations who have relapsed on targeted therapy?

a) In lung adenocarcinoma patients who harbor sensitizing EGFR mutations and have progressed after treatment with an EGFR-targeted TKI, physicians must use EGFR T790M mutational testing when selecting patients for third-generation EGFR-targeted therapy.

c) There is currently insufficient evidence to support a recommendation for or against routine testing for ALK mutational status for lung adenocarcinoma patients with sensitizing ALK mutations, who have progressed after treatment with an ALK-targeted Tyrosine Kinase Inhibitor (TKI).

Key Question 5: What is the role of testing for circulating cell-free DNA for lung cancer patients?

a) There is currently insufficient evidence to support the use of circulating cfDNA molecular methods for the diagnosis of primary lung adenocarcinoma.

b) In some clinical settings in which tissue is limited and/or insufficient for molecular testing, physicians may use a cfDNA assay to identify EGFR mutations.

c) Physicians may use cfDNA methods to identify EGFR T790M mutations in lung adenocarcinoma patients with progression or secondary clinical resistance to EGFR-targeted TKI; testing of the tumor sample is recommended if the plasma result is negative.

a) 2013 – Cytologic samples are also suitable for EGFR and ALK testing, with cell blocks being preferred over smear preparations VERSUS 2017 – Pathologists may use either cell blocks or other cytologic preparations as suitable specimens for lung cancer biomarker molecular testing.

c) 2013 – IHC for total EGFR is not recommended for selection of EGFR TKI therapy VERSUS 2017 – It is strongly recommended that laboratories should not use total EGFR expression by IHC testing to select patients for EGFR-targeted TKI therapy.