SUMMARY: Lung cancer is the second most common cancer in both men and women and accounts for about 14% of all new cancers. The American Cancer Society estimates that for 2018 about 234,030 new cases of lung cancer will be diagnosed and over 154,050 patients will die of the disease. Non Small Cell Lung Cancer (NSCLC) accounts for approximately 85% of all lung cancers. Of the three main subtypes of Non Small Cell Lung Cancer (NSCLC), 30% are Squamous Cell Carcinomas (SCC), 40% are Adenocarcinomas and 10% are Large cell carcinomas.

Immune checkpoints are cell surface inhibitory proteins/receptors that are expressed on activated T cells. They harness the immune system and prevent uncontrolled immune reactions. Under normal circumstances, Immune checkpoints or gate keepers inhibit intense immune responses by switching off the T cells of the immune system. With the recognition of Immune checkpoint proteins and their role in suppressing antitumor immunity, antibodies have been developed that target the membrane bound inhibitory Immune checkpoint proteins/receptors such as CTLA-4 (Cytotoxic T-Lymphocyte Antigen 4, also known as CD152), PD-1(Programmed cell Death 1), etc. By doing so, T cells are unleashed, resulting in T cell proliferation, activation and a therapeutic response. 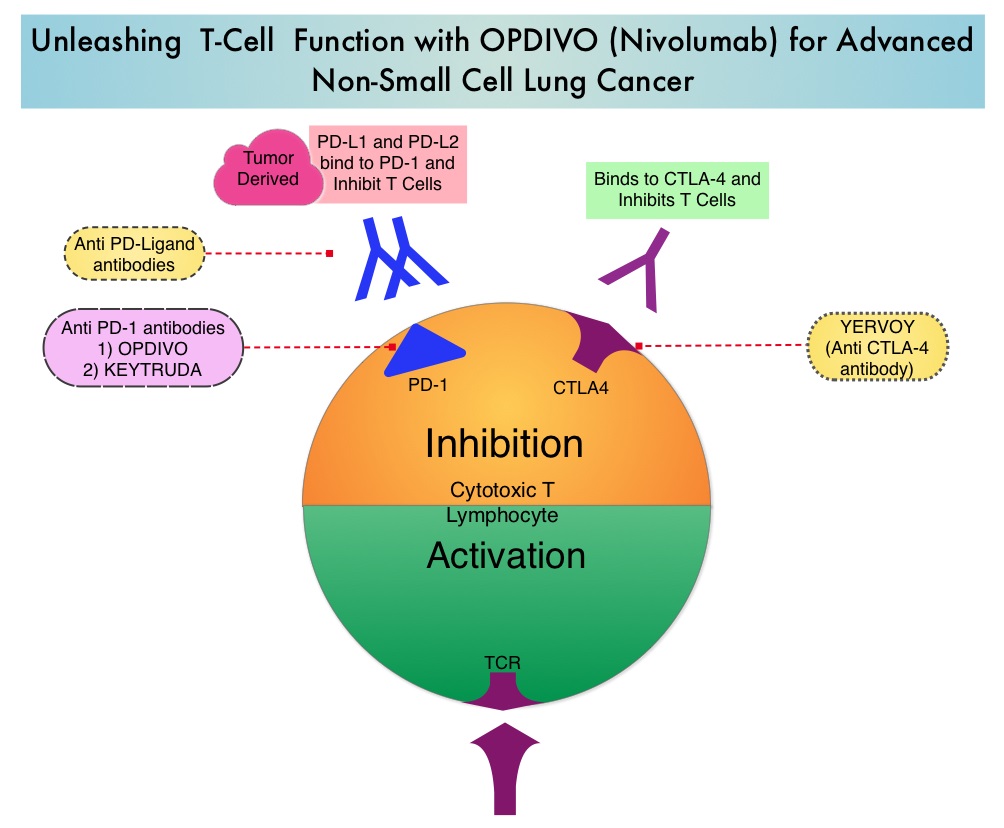 OPDIVO® (Nivolumab) is a fully human, immunoglobulin G4 monoclonal antibody that binds to the PD-1 receptor and blocks its interaction with PD-L1 and PD-L2, thereby undoing PD-1 pathway-mediated inhibition of the immune response and unleashing the T cells. OPDIVO® significantly prolonged Overall Survival (OS) and had a favorable toxicity profile, when compared to TAXOTERE® (Docetaxel), in two open-label, randomized, phase III trials, among patients with advanced squamous (CheckMate 017) or non-squamous (CheckMate 057) NSCLC, who had disease progression during or after platinum-based chemotherapy. This data led to the approval of OPDIVO® in previously treated advanced NSCLC.

There is however limited data on long term efficacy and safety for immune checkpoint inhibitors in patients with NSCLC when compared with chemotherapy. The authors in this publication reported updated efficacy and safety data for OPDIVO® in patients with advanced NSCLC from the CheckMate 017 and CheckMate 057 trials, with a minimum follow up of 2 years in all patients. Patients in both trials had stage IIIB or IV disease and had disease progression during or after platinum-based chemotherapy. In CheckMate 017 study, 272 patients with metastatic squamous NSCLC were randomized to receive OPDIVO® (Nivolumab) 3 mg/kg IV every 2 weeks (N=135) or TAXOTERE® (Docetaxel) 75 mg/m2 IV every 3 weeks (N=137). In CheckMate 057 trial, 582 patients were randomized to receive OPDIVO® 3 mg/kg IV every 2 weeks (N=292) or TAXOTERE® 75 mg/m2 IV every 3 weeks (N=290). Treatment was continued until disease progression or unacceptable toxicity. The minimum follow up for survival was 24.2 months.

The Overall Survival rate at 2 years with OPDIVO® versus TAXOTERE® were 23% vs 8% among squamous NSCLC patients and 29% vs 16% among non-squamous NSCLC patients. The relative reductions in the risk of death with OPDIVO® versus TAXOTERE® was similar to what was reported in the primary analyses. As was reported at the time of the primary analysis of these two trials, the superiority of OPDIVO® over TAXOTERE® was independent of Programmed cell Death Ligand 1 (PD-L1) expression in squamous NSCLC, whereas among patients with non-squamous histology, the benefit with OPDIVO® was greater in those with higher levels of PD-L1 expression, but patients with PD-L1 expression of less than 1% benefited as well.

In the pooled analysis of both trials, the median OS was 11.1 months with OPDIVO® versus 8.1 months with TAXOTERE® (HR=0.72). The relative reduction in the risk of death with OPDIVO® was 28%. Higher PD-L1 expression levels was associated with greater OS benefit with OPDIVO® (HR=0.42 in patients with 50% or more PD-L1 expression). Survival benefit however was still observed in patients with 1% or less PD-L1 expression (HR=0.78). Durable responses were noted with OPDIVO® among 37% of the confirmed responders with squamous NSCLC and 34% of confirmed responders with non-squamous NSCLC. These patients had ongoing responses after a minimum follow up of 2 years whereas no patient in the TAXOTERE® treated group had an ongoing response. The rates of treatment-related adverse events of any grade were lower with OPDIVO® compared to TAXOTERE® (any grade: 68% vs 88%; grade 3-4: 10% vs 55%, respectively).