SUMMARY: Breast cancer is the most common cancer among women in the US and about 1 in 8 women (12%) will develop invasive breast cancer during their lifetime. Approximately 266,120 new cases of invasive breast cancer will be diagnosed in 2018 and about 40,920 women will die of the disease. The HER or erbB family of receptors consist of HER1, HER2, HER3 and HER4. Approximately 15-20% of invasive breast cancers overexpress HER2/neu oncogene, which is a negative predictor of outcomes without systemic therapy. HERCEPTIN® (Trastuzumab) is a humanized monoclonal antibody targeting HER2 and adjuvant chemotherapy given along with HERCEPTIN® reduces the risk of disease recurrence and death, among patients with HER2-positive, early breast cancer. Nonetheless, approximately 25% of patients will develop recurrent disease within 10 years following this adjuvant intervention. Extending the duration of adjuvant HERCEPTIN® therapy or adding TYKERB® (Lapatinib), a Tyrosine Kinase Inhibitor that targets HER1 and HER2, has not improved outcomes. 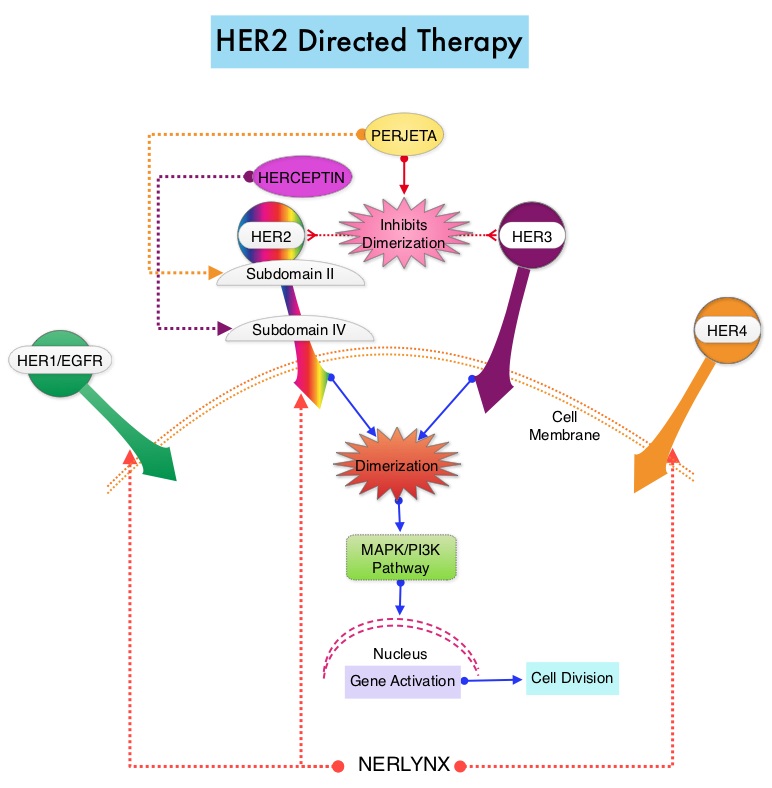 NERLYNX® is a potent, irreversible, oral Tyrosine Kinase Inhibitor, of HER1, HER2 and HER4 (pan-HER inhibitor).NERLYNX® interacts with the catalytic domain of HER1, HER2, and HER4 and blocks their downstream signaling pathways, resulting in decreased cell proliferation and increased cell death. Clinical data has suggested that NERLYNX® has significant activity in suppressing HER-mediated tumor growth and is able to overcome tumor escape mechanisms experienced with current HER2-targeted and chemotherapeutic agents. It has been well known that hormone receptor positive breast cancer patients, who are also HER2-positive, have relative resistance to hormone therapy. Preclinical models had suggested that the addition of NERLYNX® could improve responses in ER positive, HER2-positive breast cancer patients. Further, NERLYNX® has clinical activity in patients with HER2-positive metastatic breast cancer.

ExteNET trial is a multicentre, randomized, double-blind, placebo-controlled, phase III study, in which the efficacy and safety of 12 months of NERLYNX® after HERCEPTIN®-based adjuvant therapy was evaluated, in patients with early stage HER2-positive breast cancer. Patients with early stage HER2-positive breast cancer (N=2,840), and within two years of completing adjuvant HERCEPTIN®, were randomized in a 1:1 ratio to receive either oral NERLYNX® 240 mg per day (N=1420) or placebo (N=1420), for one year. Patients were stratified by hormone receptor status, nodal status (0, 1-3, or 4 or more), and HERCEPTIN® adjuvant regimen (sequentially versus concurrently with chemotherapy). The authors had previously reported that NERLYNX® when given for 12 months after chemotherapy and HERCEPTIN®-based adjuvant therapy, to women with HER2-positive breast cancer, significantly improved 2-year invasive Disease Free Survival.

They now reported updated efficacy outcomes, from a protocol-defined 5-year follow-up sensitivity analysis, and long-term toxicity findings. The predefined endpoint of the 5-year analysis was invasive Disease Free Survival (iDFS), defined as the time between the randomization date to the first occurrence of invasive recurrence (local/regional, ipsilateral or contralateral breast cancer), distant recurrence, or death from any cause. The median follow up was 5.2 years.

It was noted that patients in the NERLYNX® group had significantly fewer invasive Disease Free Survival events, than those in the placebo group (HR=0.73; P=0.0083). The 5-year invasive Disease Free Survival was 90.2% in the NERLYNX® group and 87.7% in the placebo group. The most common grade 3-4 adverse events associated with NERLYNX® were diarrhea, vomiting and nausea. Patients can experience diarrhea early, in the first 2 or 3 days and this can be alleviated using antidiarrheal prophylaxis with Loperamide, initiated with the first dose of NERLYNX® and continued for the first 2 months of treatment and as needed thereafter. There was no evidence of long-term toxicities associated with NERLYNX®, when compared to placebo.

It was concluded that at a median follow up of 5 years, NERLYNX® when given for 12 months after chemotherapy and HERCEPTIN®-based adjuvant therapy, to women with HER2-positive breast cancer, significantly reduced the proportion of clinically relevant breast cancer relapses that might lead to death, such as distant and locoregional recurrences outside the preserved breast. This benefit was seen without increase in the risk of long term toxicity. Overall Survival data will be available at a later date. NERLYNX® is the first TKI approved by the FDA, shown to reduce the risk for disease recurrence, in patients with early stage HER2-positive breast cancer. Neratinib after trastuzumab-based adjuvant therapy in HER2-positive breast cancer (ExteNET): 5-year analysis of a randomised, double-blind, placebo-controlled, phase 3 trial. Martin M, Holmes FA, Ejlertsen B, et al. for the ExteNET Study Group. Lancet Oncol 2017;18:1688-1700